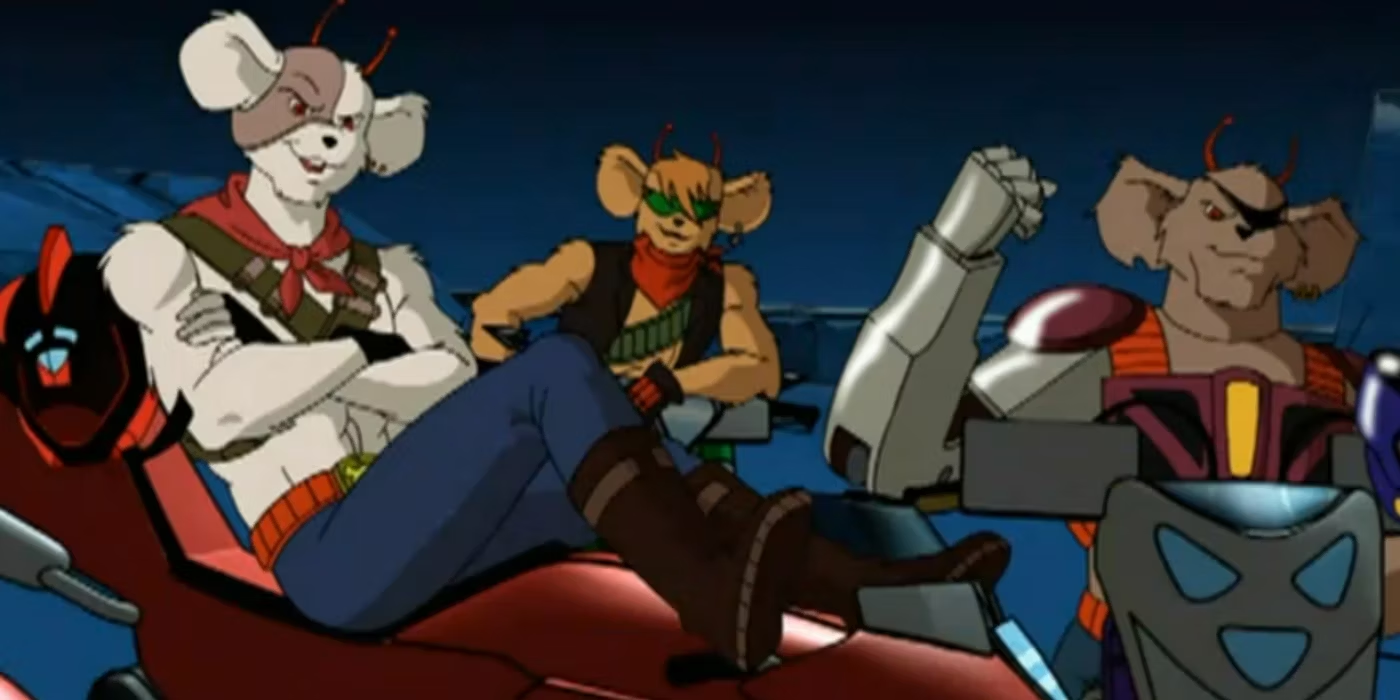 Biker Mice From Mars (1993-1996) returns; yes it’s an obvious grab at 90s nostalgia, but that doesn’t mean it can’t be good! People who know of this cartoon series debate whether it is a blatant rip-off or simple clone of Teenage Mutant Ninja Turtles. I say the latter; and Geek News Now explores the why along with the news surrounding the comeback of the Biker Mice!

First, a quick summary of the show: three humanoid Martian mice — Throttle, Modo, and Vinnie — escaped enslavement from a tyrannical fish-like race called the Plutarkians with whom they waged war and lost. Some time later, the Biker Mice are chased to Earth by the Plutarkians and crashland in Chicago. There, with the help of garage owner “Charley” Davidson, the mice make their final conflict to defend Earth and defeat the Plutarkians for good!

To be sure, Biker Mice From Mars is a clone of Teenage Mutant Ninja Turtles! It has a small gang of cool, tough, anthropomorphic dudes. These three dudes who live for kicks (and not pizza) take on a crime boss who secretly is an old enemy of theirs from their Martian past. They aren’t martial artists (could’ve been “Martian artists” though); rather they solve their problems via their super-tech motorcycles. And they fight off a variety of monstrous bad guys.

A rip-off would have been four anthropomorphs who crave a junk food and shout a catch-phrase a la “cowabunga”. The most rip-off I can see insofar as the first episode is villain “Exterminator”; a very obvious take from The Terminator; right down to his two lines of monologue: “Hasta la vista, rodents!” and “I’ll be back!”

But it seems that this clone has caught the attention of The Nacelle Company. Who are they? Well, they’re responsible for those two awesome Netflix docu-series shows: The Toys That Made Us (2017-2019) and The Movies That Made Us (2019-2021). Nacelle obtained the rights to Biker Mice From Mars and apparently has plans for it. What exactly beyond their basic intention to bring the show back and release toys is not yet revealed.

The Biker Mice — Throttle, Modo, and Vinnie — stare up at an approaching Plutarkian ship! Picture credit to dailymotion.com

Comicbook.com published their exclusive on this news as of January 19th, 2023 at 11AM:

“Immediately, Nacelle plans to push a new toyline out featuring the characters, with plans to re-develop another animated series nearly 30 years after the original property aired its final episodes. ‘Biker Mice is the perfect way to start 2023 off with a Mars-based bang! And they’ll fit in, with their unique, creative brilliance, with the rest of brands we’ve recently acquired,’ Nacelle CEO Brian Volk-Weiss tells us.”

Takes A Turtle To Know…

Interestingly enough, Rob Paulson (voice of “Raphael” of TMNT fame) voiced one of the Biker Mice — Throttle — in its original run! Comicbook revealed in their article that Paulson once told them the following about how he’d love to revisit this cartoon: “I did another show that was an unabashed, well, not a ripoff. But it’s deeply inspired by Turtles. I did a show called Biker Mice From Mars years ago, that I thought was really fun. The three main characters were myself, Ian Ziering, who you guys know from 90210, and Dorian Harewood,”

Throttle (left) and Raphael (right) share one thing in common; no, not the red bandana! Pictures credit to Facebook.com (via “Bikermiceaddicted” page) and teenagemutantninjaturtles.com

Paulson added: “That was a pretty cool action-adventure show with some cool music. A lot of humor. There have been rumors about maybe that being rebooted, with a whole bunch of different characters.”

Here’s the real kicker… This isn’t the first time someone dug up Biker Mice From Mars from its 90s grave and zapped it back to life! In 2006, Fox had the mice face a new threat: the cat-like Catatonians and evil land-developer Ronaldo Rump! Doubtless, the new show Nacelle plans to make could revisit anything from the two previous series and tell the new stories in modern scope; meaningfully and not bludgeoning the points into our heads.

The Biker Mice returned in a 2006 re-launch series! Picture credit to reelgood.com

I saw the original show a bit as a 90s kid; I didn’t dislike it, but it never grabbed my attention in a large way. Other kids at the time talked about it here and there. But my inner nostalgic who collects 80s and 90s cartoons on DVD and Blu-Ray was likely to get back around to Biker Mice From Mars. Personally, I think it’s not a bad idea someone trying to breathe new life into the cartoon. It can’t possibly have the same “90s magic” inspired by the times, but no doubt in this current era of revitalized cartoons — Masters of the Universe: Revelation (2021), for instance — it would be cool to see today’s hot take on an obscure 90s cartoon like Biker Mice From Mars.

Would you love to see the return of Biker Mice From Mars? Or is it just another TMNT clone of the 90s? Comment below! Read the exclusive news story from Comicbook.com on this return! Also, subscribe to Geek News Now and give its Facebook page a like!

Remember mini pacifiers? How about some other terrible things to come out of the 1990s? Geek News Now explores five of these Ghosts of...