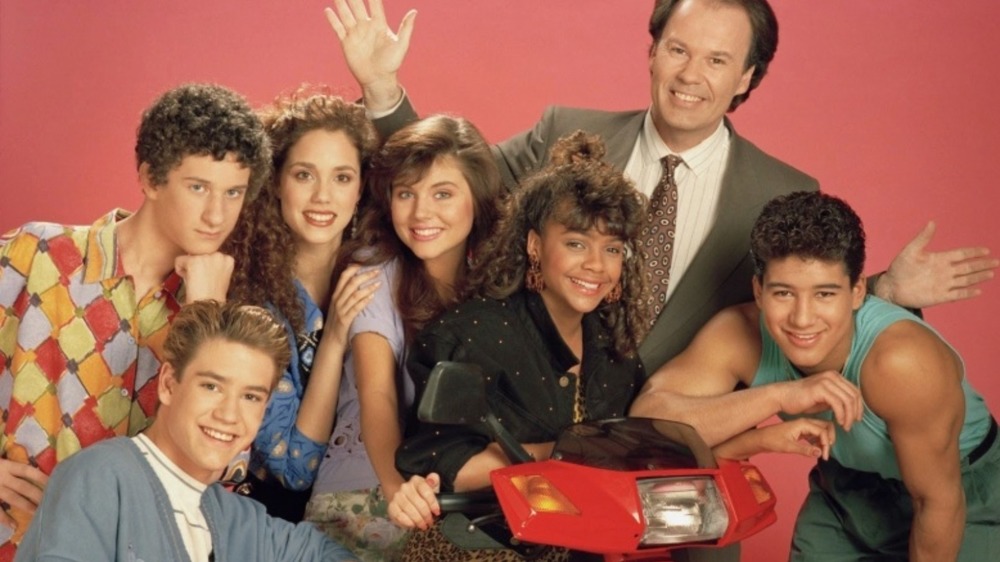 Remember mini pacifiers? How about some other terrible things to come out of the 1990s? Geek News Now explores five of these Ghosts of Culture Past which should never make a serious comeback. Sadly, some have…

By God did we have a bad idea with this fashion trend for kids in their pre-to-early teens… The concept was simple: tiny plastic baby pacifiers on necklaces. They acted as pendants but you wouldn’t be surprised to see some kid with one of these between their teeth. It looked childish and ridiculous; infantile, even! And you could find it in Spencer’s Gifts; also as earrings or key chains!

But kids took to this fashion trend in droves, unfortunately. And if you miss this trend, you can recreate it via sources like on Etsy!

2. Saved By the Bell

Saved By the Bell (1989-1993) was terrible for one stand-out reason: Zack Morris! We all know the phrase “Zack Morris is trash”… Well, it’s fairly true! Crimes like selling friend Lisa’s kisses to eager young men, kissing Lisa passionately when he knew pal Screech loved her with all his heart, pretending to be a professor to date a college student, and more besides! For real, he once tried to turn his role with the school yearbook into a scheme to market dating profiles of Bayside High’s cutest girls to, well, ANY lonely men in town!

Granted the show would occasionally try to tackle serious issues: pollution, drugs, addiction, homelessness… But the severely messed up “antics” (maybe too lenient a word) of Zack Morris, how exploitive he was of anyone and everyone, really overshadows whatever was good about Saved By the Bell!

The gang, minus Screech, reunites years later for a reboot! Picture credit to variety.com

It returned in reboot form in 2020; but lasted only two seasons… Get this: Zack ran for governor to get out of paying a $75 parking ticket and landed a position of ultimate responsibility/authority while being significantly underqualified and wrong for the job. Never let a selfish con-artist have such a role unless you want people like that to use and abuse their authority to line their pockets! But at least he didn’t carry a mini pacifier…

JNCO jeans in their full (and we mean FULL) glory! Picture credit to jenkemmag.com

JNCO was kids constantly trippin’; and I don’t mean acting a fool/thinking crazy… I mean planting face-first into the ground because we constantly stepped into the front of the pant-legs. Seriously, these pants were an accident waiting to happen!

I mean who in their right mind wants another return of bellbottom pants? And JNCO jeans were a form of bellbottoms, to be sure. Who are we kidding? With a 50-inch circumference, they were parachutes; not pant-legs! And they constantly dragged on the ground; raking the fabric ragged until it looked torn and soaked after hitting every wet patch we walked on. We sported these back in the day proudly, along with our mini pacifiers, and expected our parents to take us seriously… I cannot facepalm hard enough!

Believe it or not, some people DO miss dial-up internet! Bizarre-o! Picture credit to latestly.com

No… No… No! No-no-no-NO!! You think you have a slow, inconvenient internet connection? Let me tell you a tale about “dial-up internet”! It was the worst.

Every time you logged in to the internet — yes, you had to regularly log in instead of one-and-done — you were treated to a real “delight”. This included an angry high-pitch tone, series of beeps, static sound, and all for about a minute or two depending on how many log-in attempts it took to get online! Noise aside, dial-up meant your land-line phone was cut off from receiving calls; you could miss something important while surfing the net! And man alive it was slow; you’d be hard-pressed to stream any video feed from, say, Netflix and YouTube or to Twitch.

With dial up the maximum speed is 56 kbps, although only 53 kbps is achievable and much less is the norm, like 40 kbps. To put this into perspective, say you wanted to download a 2 hour movie with a file size of 700 MB. With a 56 kbps connection it’d take you 213 hours, or nearly 9 days, to download the movie.

While net connection is less complicated today, it’s mostly a lot more convenient. That is, unless you live out in the sticks; then you can’t expect to have decent upload speed without paying insane prices! But that’s another story…

Well I mean they may have felt cool and all, but frosted tips were a LITTLE silly; I oughta know because I was right in line for it! And years before then, a family member of mine sported a rat tail when he was in early elementary school. Would we do these trends again? Ummmm no… Thank you for the lemon-frosted, extremely mini mullet-style memories; but no! It’s like this: DECIDE on a hair length and color!

Celebs like Justin Timberlake of band N’Sync, Jonathan Taylor Thomas, Mark McGrath of band Sugar Ray had frosted hair… But honestly, among celebs this trend still hasn’t died a fiery death of shame! “Mayor of Flavortown” himself — Guy Fieri — has long continued to sport the look!

An example of the rat tail! Picture credit to menshaircuts.com

Rat tails, ahh… it’s said they had a sort of Punk origin; but who can forget when Jordan Knight of boy band New Kids On The Block sported it!? Doubtless it was to give him a “tough” image. Some celebs continued this trend in the early to mid 2010s; like Shia LeBouf, Miley Cyrus, Rihanna, and more.

These six pieces of the 1990s were truly horrendous and should make us cringe at the thought: “what if they return!?” We looked goofy with our frosted tips and rat tails while chewing on mini pacifiers and watching Zack Morris manipulate Bayside High teens before tripping on our JNCO pants legs. But at least we don’t use painfully slow dial-up internet to look up these pieces of history. Let’s not do or say anything which will summon these evil spirits from their 1990s graves!

In this article:1990's, dial-up internet, Fashion, mini pacifiers, Saved By the Bell