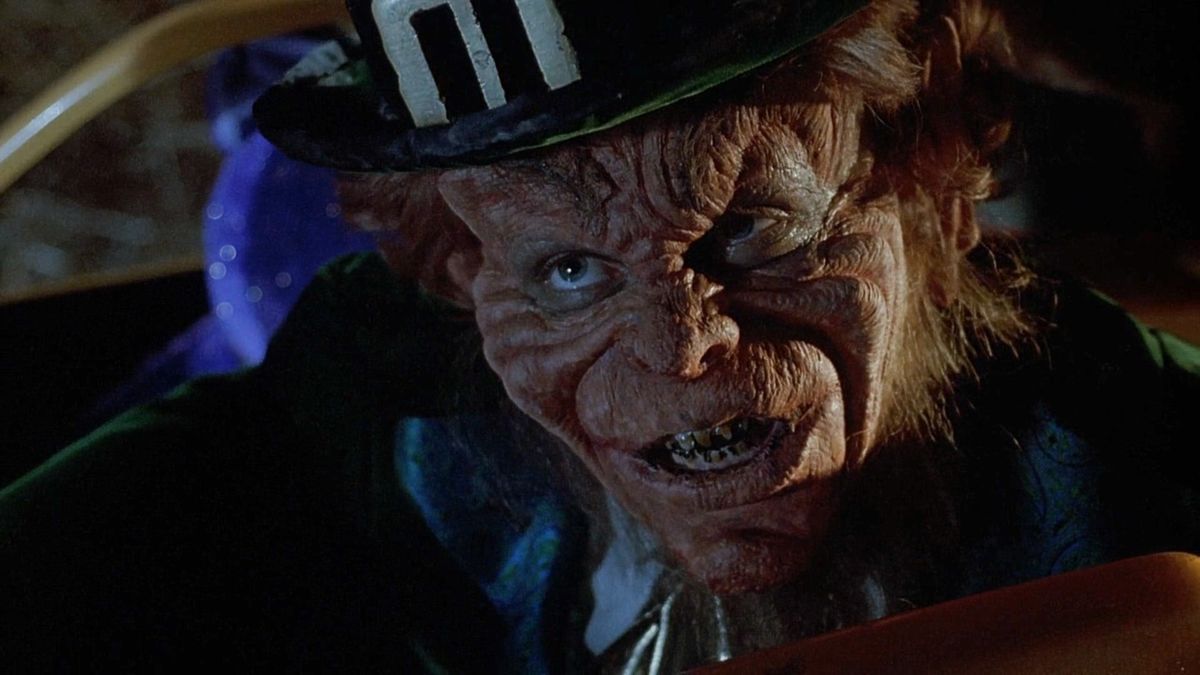 Critics might as well have said “no you Lepre-CAN’T be a hit!” But fans of this thirty year-old cult favorite shout “oh yes it Lepre-CAN!” Make no mistake, Leprechaun (1993) is a bad horror movie; but that’s why it’s so much fun! It is a dark comedy with horror vibes. Geek News Now explores Leprechaun on its thirtieth anniversary — January 8th, 1993 — and reviews why this movie is still such bad fun you have to see!

Leprechaun finds some shoes he absolutely must shine! Picture credit to medium.com

Right off the bat, it’s very fair to say Leprechaun should’ve been a straight-to-VHS product. The picture quality and pace are highly reminiscent of the average straight-to type of movie… Short bursts of exposition, lots of action, bit of blood. This alone harkens a nostalgic vibe to us 80s and 90s kids; the forbidden horror flick we’d rent from the store and watch with pals and pizza!

Story Summary: Teenage Tory (Jennifer Aniston) and her father move to a broken down house in North Dakota; there, along with three local painters (Nathan, Alex, and Ozzie), they encounter the wrath of a leprechaun (Warwick Davis) who wants his gold back.

I don’t know whose acting is better: Warwick Davis’ or Jennifer Aniston’s! Davis is pure gleeful mischief as the leprechaun; he looks like he’s having a grand old time spreading terror! The makeup job on him is masterful, too.

You’re probably going to first get annoyed with Tory, however. She’s very “money solves everything” and can’t face her problems unless dared by a handsome fella. But she takes on the responsibility of trying to get them all through the night which you would think is character arc but it just-… sorta happens.

Speaking of annoying: when local handyman Nathan telling Tory she looks “a little skinny… No offense!” is probably going to grate your nerves if you think people ought to mind their own business about a person’s body. Or when he hands Tory a broom and snidely remarks “you know how to work one of these, right?” Wow… One could presume he’s just giving the already snippy, huffy Tory a hard time so she’ll lighten up; I say dude still needs to back off and not be a jerk.

Still… It does make the moment Nathan hands Tory the shotgun, asking if she’s ever used one before to which she pumps the gun expertly and says “no” a bit funny.

Ozzie (center) points out the rainbow while Alex (left) looks on! Picture credit to blu-ray.com

You’re also going to feel rather cringe at how one character’s mental deficiency is handled. Ozzie (Mark Holton) is a grown man with a child’s mentality. This helps him bond with Alex who is himself a child. Once they discover the leprechaun’s gold, Alex posits they can afford to get Ozzie an “operation” that would make him smarter. It reflects on a time when we still didn’t weather mental differences with much sensitivity. The moment is meant to be a very innocent thing, however.

It’s awkward, these parts… No, there’s no other explanation; it’s all laughably awkward!

Apparently Jennifer Aniston doesn’t have fondness for this feature of hers; citing in one interview quoted in Game Rant: “that when she and Justin Theroux were dating, they watched the movie together, and she found it tough to watch it.” And yet, according to the trivia listed on IMDb, it’s because of Aniston and her popularity in Friends (1994-2004) — which premiered a year after Leprechaun — that the movie became a popular VHS rental from 1994 and onward. It must’ve been popular enough at the time, having sold over 100,000 VHS copies in ’93 and subsequently spawned seven sequels over the years!

The leprechaun might be at your door! Picture credit to fictionhorizon.com

Consider the general vibe of Leprechaun. The effects are practical, the music eerie-yet-playful, and it all comes together to make something fun. The film’s studio Trimark wanted a serious horror flick, but it’s not meant to be one. The goal of director/writer Mark Jones was to make something darkly funny; something kids would get a kick out of. And that’s why it’s so fun! Leprechaun is bad for all the aforementioned reasons, but wrapped within a cheesy dark comedy about a killer Irish imp!