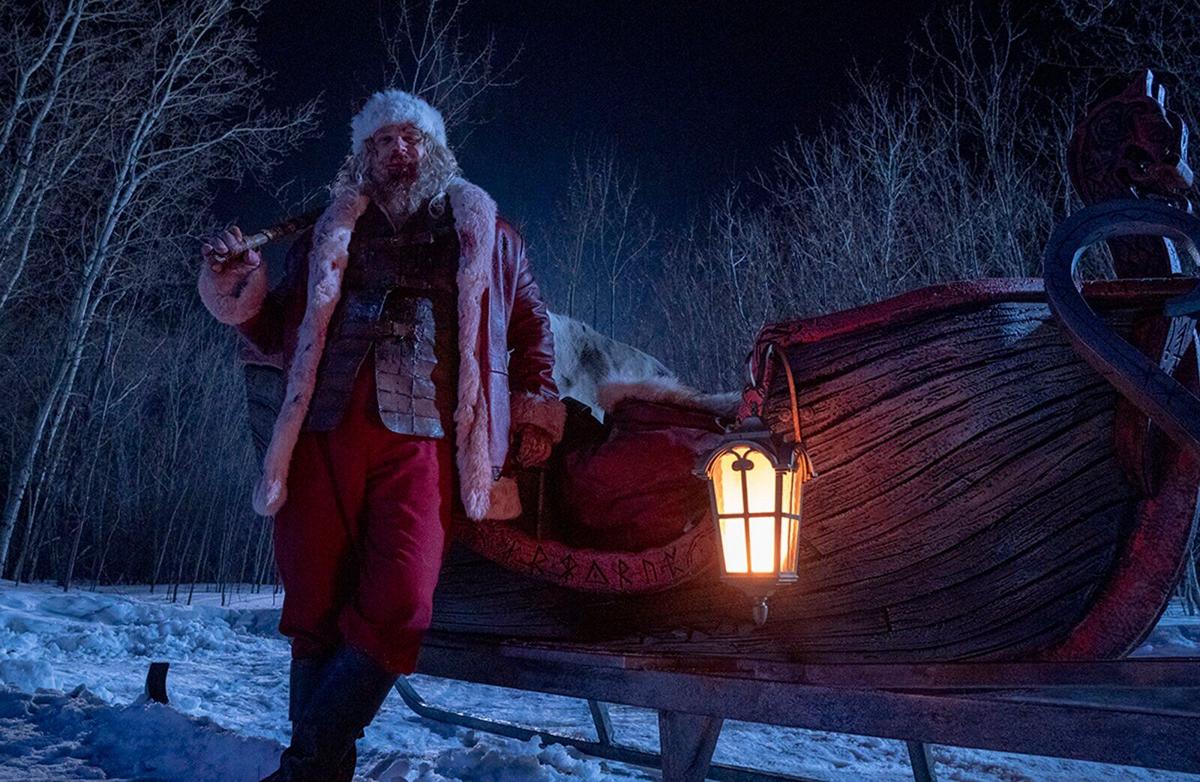 I saw Violent Night (2022) not long after it premiered in theaters… I gotta tell you, I could’ve gone my whole life never having seen this movie and my life would’ve been just fine; significantly unaltered. Released via Universal Pictures and expected to get a sequel, I’m here to warn you that It’s not a good movie… It is a true Christmas turkey!

I went in with expectation that it would be a clever action-packed comedy; it’s not… It’s a lazy pile of reindeer droppings with microscopic clever bits sprinkled on top. It wants to be Die Hard (1988) and Bad Santa (2003). While I knew going in it was a movie called “Violent Night” it would be violent, I trusted that it wouldn’t be a gorey mess. Again, I expected something reasonable in its butt-kicking action… At least Die Hard and Bad Santa had some heart and spirit!

MOVIE SUMMARY: A wealthy family is invaded by mercenaries seeking $300 million stashed in the matriarch’s safe. What they don’t count on is Santa Claus coming in to rescue the family and take the mercs out one by one and utterly deck their halls!

Santa prepares to deck some halls! Picture credit to imdb.com

1. Santa Has a Viking Past: In a move which certainly piques curiosity, it’s revealed that Santa was once a Viking warrior! And he was bad enough that he’d have made the Naughty List a thousand times over. But they don’t explore how Santa made the transition from bloody marauder to giving Saint Nick! Umm, sorry, but I have questions! Though to be fair, Santa’s background is framed much like his understanding of “Christmas magic” — even he doesn’t know how it works; but it does. So… the less you know, the better?

2. Home Alone in Reality: Home Alone (1990) is referenced a fair amount in Violent Night. Supporting character Trudy, the little girl who still believes in Santa, loves that movie and winds up making a few traps a la Kevin McCallister. Only in this story, the audience is treated to a very realistic take on how such traps would violently wound or even kill!

3. Santa, Cookies, and Alcohol: One characteristic I enjoyed was how Santa very clearly enjoys getting the cookies; especially if they’re home-made! He eats them like he’s not had them in, well, a year. Even as he ponders the dangerous situation a few times, you see him munch on a cookie. And another lil’ treat he enjoys — booze. Yeah, this Santa has been at the job for a loooong time and he’s tired, a little jaded, and helps himself to any alcohol he spots in each house he visits.

1. The Father Figure: I get that Trudy’s father, Jason Lightstone, is supposed to be a good guy; but he’s so wishy-washy and weak! He takes his estranged wife and daughter to Christmas with his billionaire mother and the rest of the greedy, selfish family while planning to drop a truth bomb in a note — after sneaking out the next morning with wife and daughter — saying he stole an extra $300 million of his mother’s fortune and doesn’t want to be under her thumb anymore… All well and good, though a bit on the Naughty List side; but not exactly the stuff of a brave person who stands for what they believe. The rest of the time, he’s such a victim that needs rescuing. That said, maybe it was done this way so his wife and daughter could shine when they take action against the intruders.

No stranger to Christmas capers, actress Beverly D’Angelo plays the rather vulgar matriarch of the wealthy family in danger in Violent Night! Picture credit to cleveland.com

2. The “Comedy”: It’s barely alive! It depends almost entirely on vulgarity! I know, I know… “what did you expect in a movie called Violent Night?” I expected a little effort at being clever or funny instead of lazy “everyone says ‘eff this’ and ‘eff that’ or something vulgar for cheap laughs”! Because why be clever when you can fill a “story” with a lot of “realistic” crudity that “EVERYONE says”? It’s enough to really feel distracting from the plot.

The only saving grace of Violent Night is David Harbour as Santa. As mentioned, he’s a tired, jaded fellow uncertain anyone cares regarding the spirit of Christmas… Not when so many people today seem so much more greedy and mean-spirited. But one little girl believes! And Santa makes it his mission to save her and her family from the gang of robbers come for Christmas. But sadly, even Harbour cannot save this festering corpse of a “story” someone on Universal’s speed-dial of writers probably coughed up while under the influence of elicit substances.

Santa and the hostages take back the house! Picture credit to digitaltrends.com

I do not recommend Violent Night at all! It’s not the worst movie I’ve ever seen, and it does have some nice moments… But it’s a lot of “stuff (albeit messed up Christmas magic stuff with bad guys) happens and goes nowhere”. It’s a filler movie; the stocking-stuffer content you find and know someone went cheap-o on your Christmas hopes. There are *better* Holiday/Christmas movies than this turkey!

Imagine a scenario in which ten characters from the Original Trilogy of Star Wars found their way to present-day Earth… during the Christmas/holiday season!...