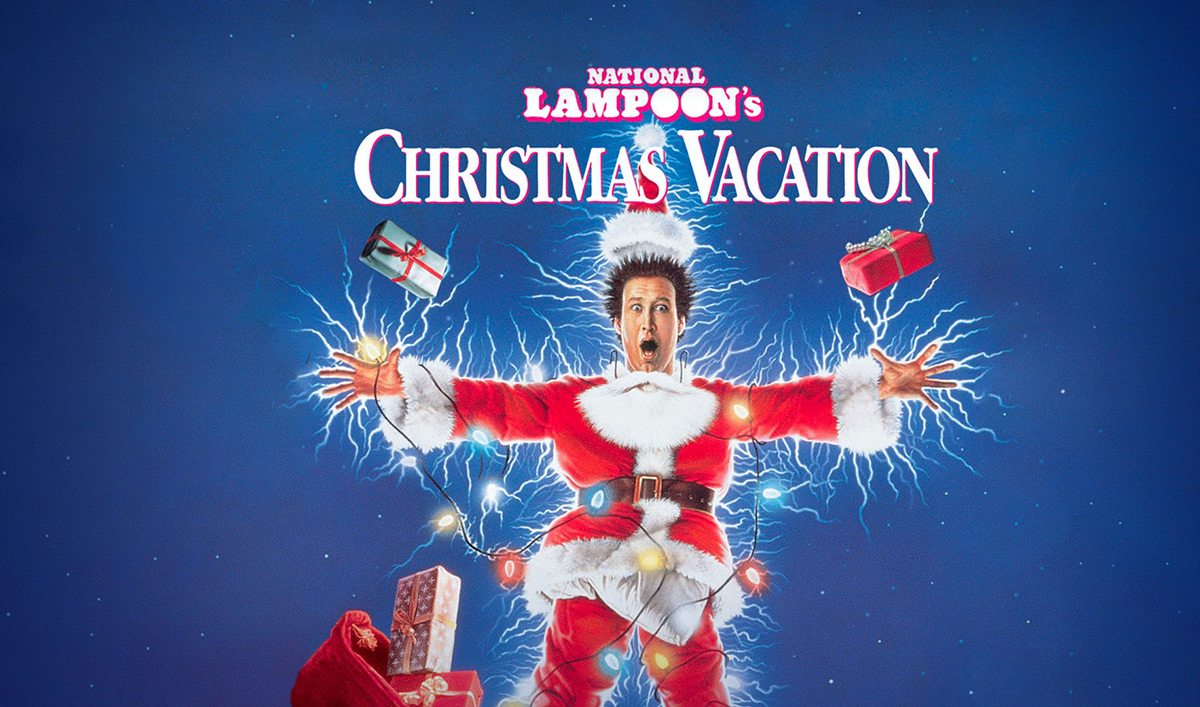 Like the song goes: “we’re so glad it’s Christmas Vacation!” Thirty-three years since its Dec. 1st, 1989 release, National Lampoon’s Christmas Vacation is still a favorite go-to Christmas movie people watch every year. We’ve seen it lots of times, sure; but wait until you get a load of the trivia behind this holiday hallmark!

In Christmas Vacation, there is a moment during which Clark Griswold (Chevy Chase) sees his company’s Christmas “bonus” — a year with the “Jelly of the Month Club” — and has a full meltdown cussing out his boss’s name in front of the Griswold family. It’s been said that what Clark says is ad-libbed; but this is only sort of true. Cast members off-screen wore signs which had a word each written on them and Chase would grab a word as needed. Now, where’s the Tylenol!?

Remember after Clark’s failed attempt at setting the exterior house lights he suggests to son Rusty they check each bulb and the boy checks his bare wrist like he’s looking at a watch? This move is one of Chevy Chase’s trademark gags in other movies and Saturday Night Live (1975-present)!

Cousin Eddie drinks some festive eggnog out of a familiar-looking moose head! Picture credit to wideopentreats.com

In the scene during which Clark and Cousin Eddie sip eggnog together, they are seen drinking out of moose-shaped mugs. This is likely Marty; mascot of the infamous Wally World theme park which the Griswolds visited in their first movie: National Lampoon’s Vacation (1983)!

After Christmas Vacation, there came to be a term in North America and Australia for an over-decorated, visibly loud in Christmas style house: a “Griswold House”!

Walmart — aka: “Wally World” in common slang — makes an appearance in Christmas Vacation.

After Clark cuts down a replacement for his previous Christmas coffin-… I mean TREE… in a somewhat deranged state, armed with a chainsaw, he saws off a loose newel post on his staircase. This references the Christmas film It’s a Wonderful Life (1946) in which lead character George Bailey finds himself regularly at odds with a broken loose newel post on his staircase.

According to the trivia page at IMDb.com, we could have seen one last bit of holiday havok befall uptight Griswold neighbors Todd and Margo. In a deleted post-credits scene, we’d see Todd make a crack about Santa Claus before falling asleep in his bedroom. After which, the Santa and sleigh figure which went careening skyward at the end of the movie would have come crashing down through Todd and Margo’s roof! I can just imagine it now:

“Why is Santa in our bedroom, Todd!?”

Chris Columbus was originally to direct Christmas Vacation with John Hughes producing. However, Columbus found very quickly upon meeting the infamously difficult Chevy Chase that he just could not work with the actor… So, the director dropped out of the project; worried he had nixed his career. This worry proved false as Hughes again sought out Columbus to direct 1990 Christmas feature Home Alone! And of the two, let’s be honest, Home Alone won bigger box office and fame than Christmas Vacation.

Interesting tidbit: At one point in Christmas Vacation, Clark is seen wearing pajamas covered in dinosaurs… Cut to Home Alone in the church scene between Kevin McCallister and Mr. Marley where the former tells the latter about how he knew someone at his school who was beaten up over a rumor that the kid wore dinosaur pajamas!

Knowing this trivia about National Lampoon’s Christmas Vacation, you can never watch it the same way again. Admit it, now it’s even more fun! And there’s more trivia to be found on the IMDb.com page from which these factoids came; head over there to check out the rest! Check out even more from Nostalgia Critic! Also, give Christmas Vacation another watch this December… And get ready to laugh once again while Cousin Eddie empties his RV’s commode into the storm sewer whilst wishing a Merry Christmas in the silent majesty of a winter’s morn!

As the Star Wars Obi-Wan Kenobi series comes ever closer to coming out people are getting excited in their own ways. The trailer coming...