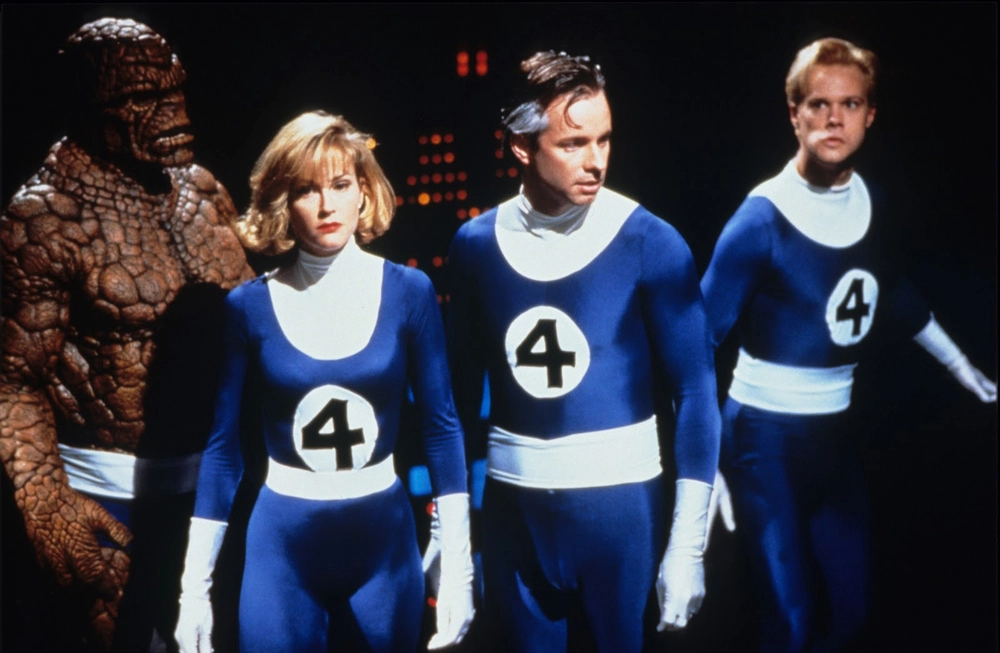 The Fantastic Four (1994)… What a fantastic flop! You may have been shaken by such notoriously bad works as The Star Wars Holiday Special (1978), but that was just a warm-up compared to this movie. Prepare yourself for terrible production quality as Geek News Now explores why The Fantastic Four, executive-produced by Roger Corman (king of cheap movie-making), is a real turkey!

Marvel tried to deny existence of The Fantastic Four over the years! Whether it was due to shame or something else is unknown; but deny this movie they did. When fans pressed that it existed, citing footage from a trailer and pictures from an early 90s issue of Wizard magazine (volume 1; #25) as proof, Marvel insisted at first it was footage from a T.V. pilot which was never picked up. By the time the internet became commonplace in every househould, bootleg VHS copy footage of the whole movie made itself known and Marvel could no longer deny the truth.

Watching The Fantastic Four is indeed like watching the pilot for a T.V. series of said team; this is not cinema-quality footage. For real, the reason you’ll laugh is not because the villain is legit named “Victor Von Doom”…

The Thing in all his rocky glory! Picture credit to IMDB.com

Let’s consider the very awkward romance between Reed Richards and Sue Storm. It begins when Sue, as an early-teenage child, calls a 20-ish year old Reed “dreamy”; at least Reed behaves more like a father figure at the time. But then, ten years later, 30-ish year old Reed becomes suddenly enamored with the now grown up Sue. Awkward! It’s instantly mutual attraction (lacking development) as Sue cuddles up with Reed the night after they (plus Ben Grimm and brother Johnny) crash from their orbital experiment.

For that matter, Ben Grimm/The Thing gets a rushed romance too! Blind artist Alicia Masters, having only met Ben once, falls in love with the memory of him. I say memory because apart from their introduction and reunion near the end, there’s so little about Ben which Alicia can base “love” from and vice-versa!

Human Torch speeds along to beat a death ray aimed at NYC! Picture credit to IMDB.com

Then there’s the big laser blast from Doctor Doom’s death ray; it’s aimed at New York from a far-off distance. But lasers beam in a straight line and don’t curve! What’s more, Doom’s weapon is aimed at an upward angle; the laser beam would shoot staight into space where Johnny Storm in flame form stops it seemingly in orbit. As for Johnny intercepting the laser, it doesn’t work either… Laser beams travel at the speed of light, and Johnny has whole minutes to catch up with it. None of this adds up, even for a comic book superhero movie!

Roger Corman produced $1 million in budget for The Fantastic Four and the majority of it went into achieving The Thing’s costume and animatronic face! Beyond this, the film has very few special effects; and what it does have is utterly poor quality… Embarassingly obvious, too. The fake look to Johnny Storm’s flame form racing after a big laser blast, for one. But the real kicker is the effect for every time Reed Richards stretches; they tend to stretch his clothes (sleeves and pant legs) for no good reason, making him appear like some sort of Dr. Seuss-style monster!

Doctor Doom in his plastic-… I mean metallic menace! Picture credit to slashfilm.com

German producer Bernd Eichinger’s production company Constantin Film bought the film rights to The Fantastic Four from Marvel in the mid 80s. The rights would have come to the point of expiration on December 31, 1992. The story goes that to keep those rights, Eichinger opted for co-producing a low-budget movie with Roger Corman. The latter man had loads of experience making such movies. It’s contentious as to whether Eichinger never intended to release the movie; but former Marvel guru Stan Lee insisted it was true.

The Fantastic Four together! Picture credit to slashfilm.com

The Fantastic Four is a movie riddled with low quality, awkwardness, and not much redeeming value. Even if it had made its way into the cinemas, it would have bombed in a huge way. Watch for yourself for the first time or the dozenth — copies are easily available via viewing websites like YouTube! The Fantastic Four is indeed a true turkey in the geeky/nerdy community!

Mandalorians have been fan favorites for decades. The Boba Fett story has spurred many conversations and debate about what happened from the time Boba...