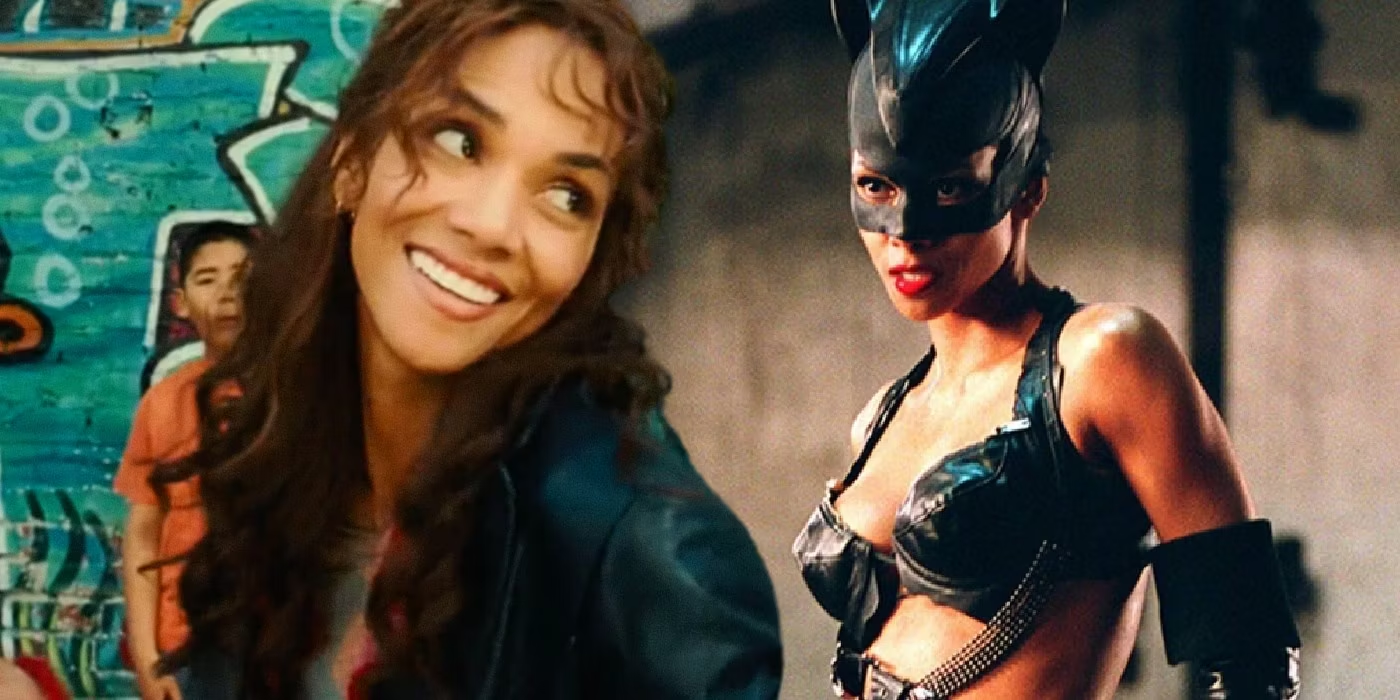 Catwoman (2004)… If this movie wasn’t already a turkey, it’d be a total hairball! Imagine a solo Catwoman movie where the frisky feline uses her wily, cat-like graces to steal what she wants and maybe outwit a few baddies in true anti-hero style… Well, we didn’t get that with Halle Berry’s one-time run in Catwoman! This movie, which should have been a solid take on a fan-favorite character, is a real turkey which Geek News Now looks back at and shares why it’s so bad.

To begin with, there is no focus on craftiness or catburglaring (not much, anyway) behind this Catwoman; just Halle Berry looking sexy in a cat-styled costume. When she’s not being that, she’s testing our patience as a woman named Patience — no, I’m not kidding — Phillips. Not Selina Kyle for whatever reason; but a whole new identity of a shy, sensitive graphic designer. Since her death and resurrection, Patience behaves in increasing cat-like behavior: falling on all-fours, gulping down cans of tuna, rubbing catnip against her face… It gets bizarre like this at times.

Patience (Halle Berry) looks over the history behind her Catwoman power! Picture credit to reddit.com

No longer is Catwoman a spectacular thief with a penchant for a cat or two. Here, Catwoman is one woman chosen to be the next in an ancient line of women gifted with cat-powers… Heightened senses and inhuman reflexes, and a cat’s sense of total confidence and independence.

Don’t get me wrong… Superhero origins, their powers, all that come from some pretty baloney things. Most people bitten by a radioactive spider would suffer radiation poisoning and die, for instance. And a good story promoting women who claim their power in themselves and take it into an uncertain world is just as awesome as when it happens for men.

That said, this movie is not one of those which delivers such. It’s a stereotype of “what makes a woman attractive” tropes… That’s the subtext, if not the point; shrouded in “women power!” They don’t even take Catwoman’s enemy possibilities seriously!

Consider the enemies Catwoman shares with Batman… Riddler, Bane, Scarecrow for example; not a one of them is utilized. Even Ra’s al Ghul would have been a phenomenal villain for this Catwoman! Her power descends from an ancient source; Ra’s gets his power from an ancient source and has lived for hundreds of years… Imagine if he heard of this “Catwoman” legend in his long lifetime; he’d try to steal it perhaps for his daughter Talia as a birthday gift! Shoot, if you really cannot avoid the “two women catfight”, woman vs. woman scenario, have Talia al Ghul be the nemesis of this Catwoman!

Instead, we get Sharon Stone as “Lady It-doesn’t-matter”; someone who will never live on in the annals of Catwoman (or Batman) rogues galleries. Stone is Patience’s former boss who owns a cosmetics company and plans to put a lethal product into the market. Yes, folks… Catwoman’s very purpose in her first and only solo movie to date is watered down to fighting an evil cosmetics baroness.

Because nothing says “we have faith in presenting a heroine to an audience” than reducing your heroine and her cause to stereotypical tropes: (1.) women fighting each other. (2.) the best lady friend who is meant to be less attractive than the leading lady (even when said lead is shy/mousey). (3.) pushing a “women power” message while also pushing Halle Berry in skimpy, sexy form-fitting attire you know will be ogled.

Catwoman creeps along the city rooftops! Picture credit to tvovermind.com

In the dawn of superhero movies pre Marvel Cinematic Universe, Catwoman falls extremely short. For crying out loud, it scored 8% on the tomatometer with an 18% audience score! It’s the character’s only solo film and they blew it. Don’t waste your time with this film. It’s not the empowering story they bludgeon into our heads; it’s a stereotype, but with superpowers. Because of this, Halle Berry’s Catwoman movie is a true turkey in the geeky/nerdy community!