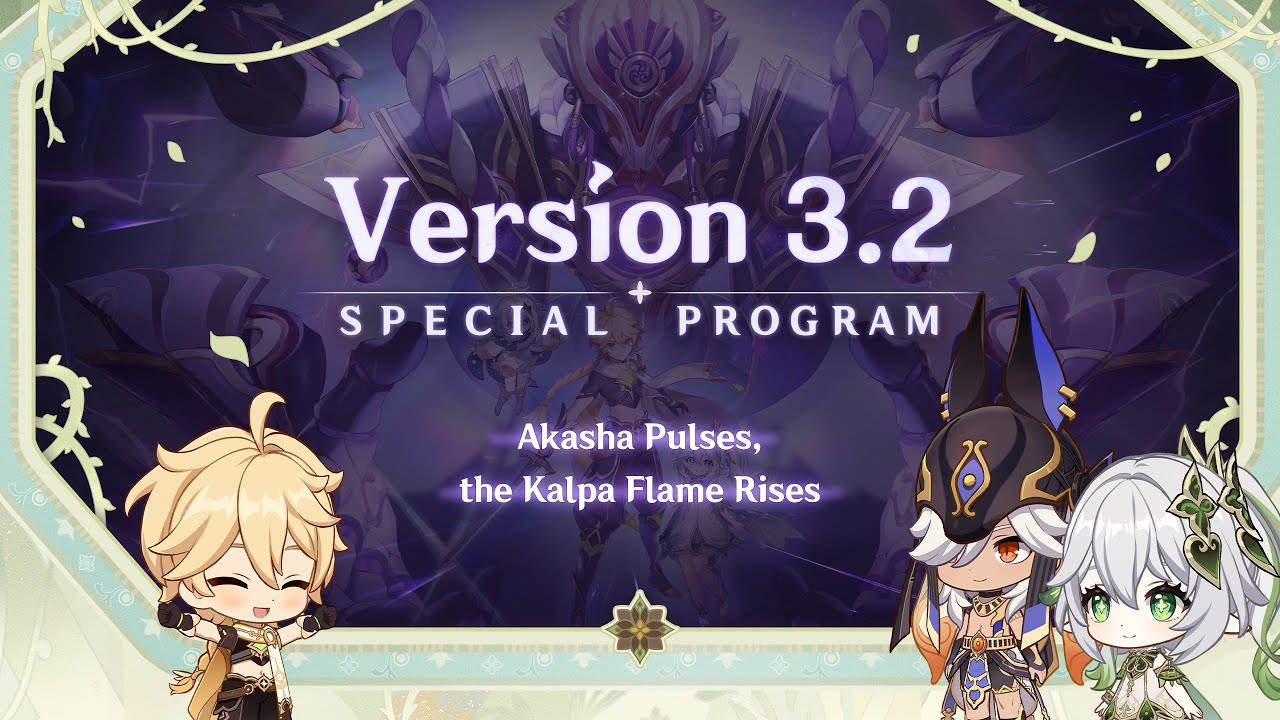 Genshin Impact 3.2 is finally here. On October 23rd, Zach (Aether), Kimberley (Nahida), and Alejandro (Cyno) hosted the 3.2 Special Program, showcasing many things. This included not only the final showdown between Scaramouche and the Traveler, but also new events to come. With so much to cover, and a lot to look forward to, let’s go over what we can expect to come with Version 3.2. Keep in mind if you haven’t already played Genshin Impact 3.1’s main storyline at this point, this article will contain spoilers for the journey ahead.

Scaramouche preparing for the Traveler. Image from pcgamesn.com

Travelers who played the Genshin Impact 3.1 Update also learned more about the situation between Lesser Lord Kusanali. By using the Dendro Archon’s power, the Akademiya, led by Fatui Harbinger Il Dottore (The Doctor), used the Akasha Terminal to control some of the people of Sumeru. In the meantime, Scaramouche plans to use the Electro Gnosis to turn himself into a god. Alhaitham, a scholar for the Akademiya, learned of this action, now joining the Traveler in the plan to free Nahida.

In addition, Tighnari and Nilou from Sumeru City also catch wind of the Akademiya’s actions, and join the Traveler on their mission. Accompanied by desert dwellers Candace and Cyno, and a clear indication of the Fatui’s plans, the Traveler and co plan to infiltrate the Akademiya, stop Scaramouche, and save the Dendro Archon. Will their plan succeed, or will the Balladeer become the god he plans to be? Only way to find out is to play Chapter 3 – Act 5: Akasha Pulses, The Kalpa Flame Rises.

With the arrival of Version 3.2, players are now able to also wish for the 5-Star Dendro Archon, Nahida (Lesser Lord Kusanali), to accompany them on their journey through Teyvat. 5-Star Pyro bow user Yoimiya will also be joining Nahida for a rerun during the course of the first half of 3.2.

Players can enjoy getting Nahida, as her elemental skill allows her to collect harvestable items from afar and read Sumeru NPC’s minds. In combat, her skill connects enemies and dishes out linked damage. In addition, her burst, Illusory Heart, creates a massive Dendro dome on the field. Secondly, the Burst allows one of three effects from her skill, All Schemes To Know:

Although Electro might be troublesome for Nahida, perhaps comining Pyro and Hydro could be useful.

During the second half of Genshin Impact Version 3.2, 4-Star Astrologist Layla, a Cryo sword wielder, will be accompanying Yae Miko and Childe during their banner reruns.

As an Astrologist of the Akademiya, Layla works hard every day to meet her teacher’s expectations. As a result, she began to work tirelessly and almost suffere from sleep deprivation. Deciding to rest before continuing she awoke one day to find her work completed. Realizing she must’ve sleepwalked, it can be determined that she does her absolute best while sleeping.

Even Tighnari and Candace often speak highly of her, giving her the nickname “Sleepwalking Eccentric”. Needless to say, she can be very useful both on and off the field. Her skill can generate a Cryo shield, and up to four stars that can strike a foe, dealing additional Cryo damage. Her burst even generates star slugs, dealing harsh Cryo damage. If combined with her skill, she can prove to be quite the DPS character.

Well, not exactly. In the event Fabulous Fungus Frenzy, players will be tasked with capturing Fungi enemies in Sumeru. In doing so, these Fungi will then be used to fight other Fungi, or defend a Ley Line in a domain. However, the player, themselves, will be unable to partake in the fight. Train up your captured Fungi, and utilize real-time combat strategies to win. As a reward, players will be given Dori as a prize should they succeed.

Partake in challenges and earn rewards. Image from gamingonphone.com

Amongst the events in 3.2, players can also participate in various challenges involving a variety of characters. In Adventurer’s Trials, players must complete specific objectives using characters that’ll provide useful during these tasks.

In addition, if challenges seem too challenging, feel free to have a friend join you and complete these challenges together.

Photos For The Canvas:

Asaragi, a travelling painter, is at a loss for inspiration again. A commission is sent out to find various locations, and take photos with specific requirements.

A new addition to this event apart from prior ones, includes being able to set new angles for better photo ops.

Entrance to the Serenitea Pot. Image from game8.co

The last piece of news regarding 3.2 comes in the form of the Serenitea Pot. A new feature will be added, allowing players to copy another player’s Teapot layout, so long as permission is enabled.

Basically, “Can I Copy Your Homework” is taken to a whole new level with this new addition.

That’s basically it. With the second half of 3.2 launching November 18th, players can look forward to a continuation of exploring Sumeru, and partaking in many events before the release of 3.3.

If you would like to share your experiences during your travels across Teyvat, be sure to leave a comment down below. Also, be sure to check out our Facebook page, as we keep our fellow geeks up-to-date on the latest news.

In this article:3.2, Genshin, Impact, Sumeru