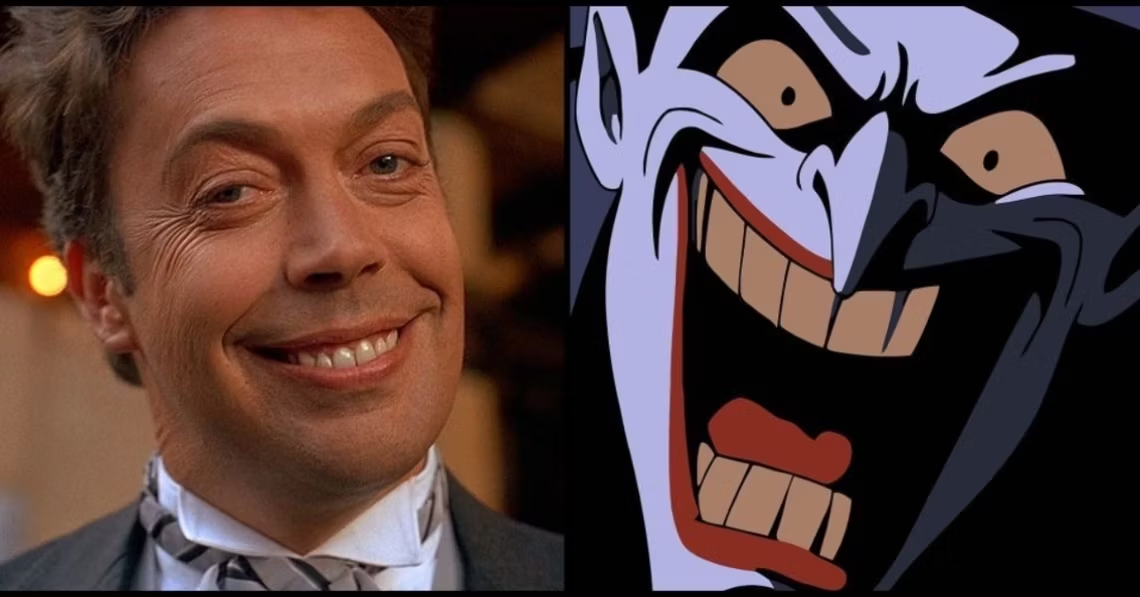 Tim Curry as The Joker… It almost happened! Legend in the geeky/nerdy circles had it that the reason Curry didn’t get the role is because production deemed his voice too scary. Recently, audio from Curry’s recordings surfaced and was put to some clips from Batman: The Animated Series (1992-1995). And… the legend is absolutely not true!

I too favored the story spoken in hushed tones by fans. It made sense: Tim Curry not only played the scary clown Pennywise in Stephen King’s IT (1990), we all knew he had range and could make himself sound menacing if the role called for it. But having finally seen the example of Curry’s voice set to Joker in action, it just does not work!

Instead of a sinister menace coiled like a cobra ready to strike, Curry provided a silly, cartoony voice! It lacks that same edge and villainy which Mark Hamill would come to give the role.

Tim Curry can certainly play amazing villains! Consider his Cardinal Richelieu in The Three Musketeers (1993)… His Darkness in Legend (1985)… Or a complicated villain like Long John Silver in Muppet Treasure Island (1996)! In each role, never menacing in an edgy sense, we always saw the man just ooze charming villainy out of his every grin. Listening to his take on Joker, however, is like listening to someone trying too hard and coming off as a cross between Bozo the Clown, a thug, and a supervillain.

From one outrageous makeup job to another for Tim Curry (left)! Picture credit to screenrant.com

Regarding the old rumor of Curry’s scare-factor, Drew Dietsch wrote for Fandom.com the following: “There were a number of unconfirmed reasons for this recasting, but the most widely spread rumor was that Curry’s performance was deemed ‘too scary’ for a show intended for younger audiences. This was later debunked by series writer Paul Dini in the excellent book Batman Animated. Dini explained that Curry’s take on the character was a little too straightforward in terms of his menace. The producers wanted to capture a more chaotic and playfully twisted version of the Joker, and Curry couldn’t quite bring that manic quality to his performance.”

It’s actually a bit disappointing that Curry didn’t use his natural voice for the role. Granted Joker isn’t British, and Curry did try to put on his best American accent; it doesn’t fly, though. And honestly, Curry’s oozing villain confidence in his voice for many other roles does not make a voice for the Clown Prince of Crime.

Tim Curry as The Joker… It wasn’t meant to be! Picture credit to cbr.com

The legend of Tim Curry’s scariness as Joker may be false, or maybe production did indeed find him too scary… But when it comes down to it and you listen to his performance, he isn’t scary whatsoever. So true or not, the legend is indeed a true turkey in the geeky/nerdy community!

Batman Legacy Up To Bat! Six Things “The Batman” Needs To Keep The Dark Knight Alive!

The Batman (2022) appears bound to be a smash hit! Both trailers released so far revealed peeks at an exciting, dark Batman tale… but...

Actor Sebastian Stan as the young Luke Skywalker… It’s something which Star Wars fans seem to want to happen! Fans of both Star Wars...

It looks like the joke’s on the Zack Snyder’s Justice League (2021); in a report from The Hollywood Reporter, multiple sources told the news...