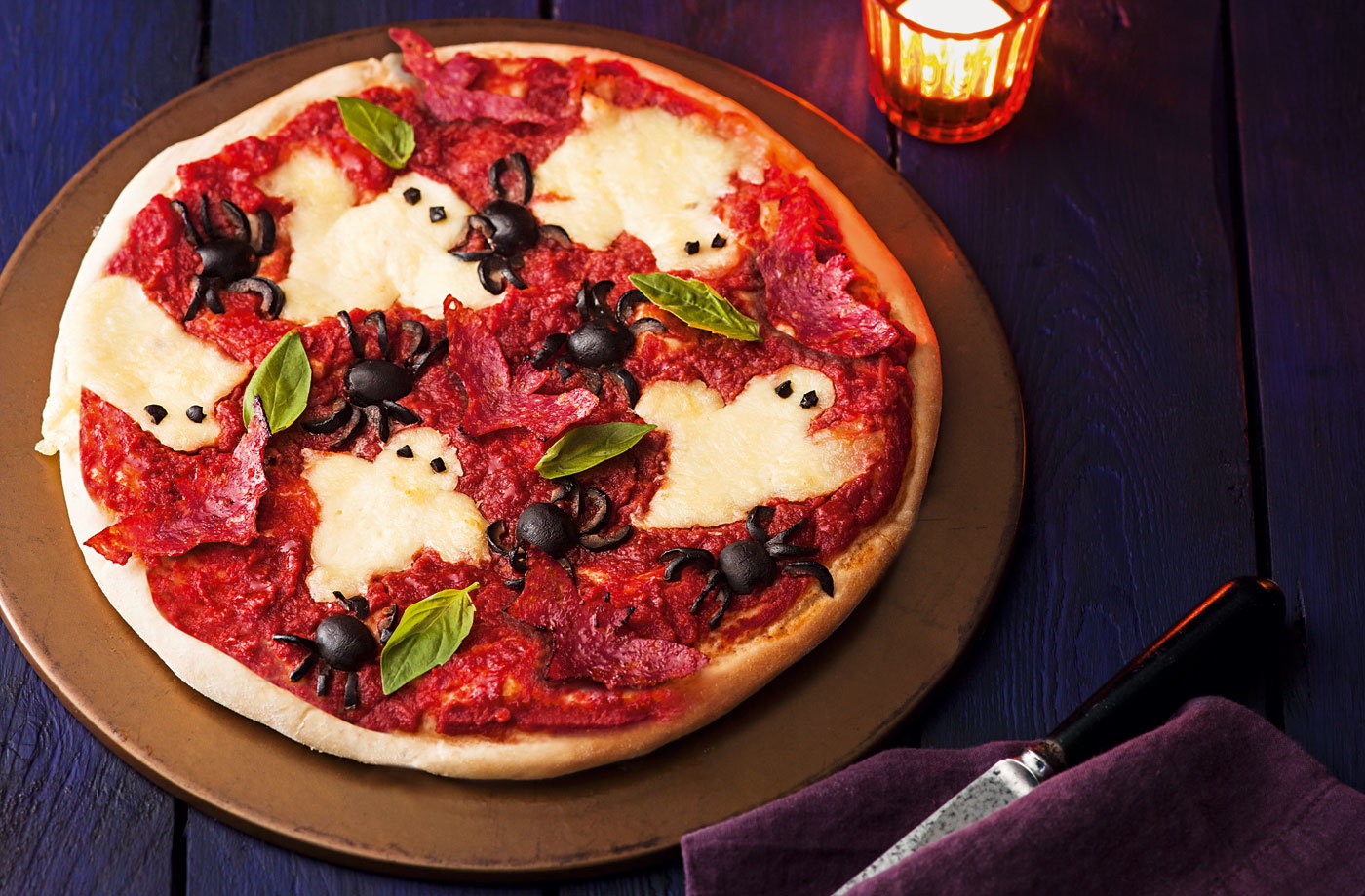 Pizza and Halloween; perfect excuse to chill at home! When spooky season comes round, it’s time for some Halloween-themed movies to get us in the mood. Not necessarily the gory, nudity-laden ones; but movies which say “monsters and sci-fi; cheesy and fun!” Couple these with your favorite hot, cheesy pizza and a cold drink, and it’s go-time. Read on for some top flicks and pizza types for a fun Halloween!

Of the many Frankenstein movies, this one truly stands out. It’s the same familiar story, more or less, but with a “man out of time” factor. It’s this factor which invites us to join lead character — Dr. Joseph Buchanan (John Hurt) — in imagining ourselves trapped in 1817 Geneva. Armed with knowledge of the future and the device which sent him back, Buchanan must find a way to stop Victor Frankenstein (Raul Julia) and the monster (Nick Brimble). Hurt’s performance is fine, but the real star is Julia as the troubled Frankenstein; a slave to his ego believing scientists are free of the concepts of God or sin. This movie is entertaining, but a touch hammy in places.

The Monster Squad (front) with monsters behind them in a movie as cheesy as a plain cheese pizza! Pictures credit to laist.com (left) and wpdh.com (right)

“The Goonies meets 80s horror” before Stranger Things (2016-present) claimed that honor! When a club of five young boys learn that monsters plan to take over the world, they band together — complete with an 80s-style montage — to save the day from the likes of Dracula, a werewolf, a mummy, and the Gill Man. It’s got a few holes in the plot: after all, who says the virgin speaker of the anti-monster spell has to be a girl? It also raises a few unique points about werewolves; their mortality and their very anatomy! It’s an awesome piece of 80s comedy horror you have to see! And remember: “My name… is *Horace*!”

3. The Lost Boys (1987)
Pizza of Choice: Garlic Crust (because vampires hate garlic… or do they?)

Whoever thought of loading Super Soakers with holy water to face vampires was a genius! This movie is brilliant like that; it is also humorous in its delivery of teenagers facing the undead. Poor Sam (Corey Haim) can only react fearfully but comically as his older brother Michael (Jason Patric), slowly turning into a vampire, accidentally floats outside the former’s window hanging for dear life onto a corded phone! Vampire lore changes slightly: vampires losing their powers if they’re invited inside, ditching coffins for hanging upside-down in a cave… The movie has blood, suspense, action, motorcycles, and comedy!

Ash wields his chainsaw and is as cheesy inside as a stuffed crust pizza! Pictures credit to bookofthedead.ws (left) and restaurantbusinessonline.com (right)

4. Army of Darkness (1992)
Pizza of Choice: Stuffed Crust (extra cheesy on the inside; just like Ash)

“Hail to the king, baby!” It’s time to revv up your chainsaw prosthesis and kick some Evil Dead butt with that macho braggart: Ash J. Williams (Bruce Campbell)! Picking up where Evil Dead II (1987) left off with Ash trapped in medieval England reluctantly saving the world from the Deadites as clumsily, yet awesomely, as possible. It’s got quotable lines, machismo, and dark comedy!

Survivors in Shaun of the Dead wandering, and Pub-style pizza from “The Isles Pub & Pizza” in Nebraska! Pictures credit to kpbs.org (left) and visitnebraska.com (right)

Zombie awesomeness before it was cool! Enjoy the zombie (don’t say the z-word!) apocalypse shenanigans of everyman Shaun (Simon Pegg); who, along with slacker bestie Ed (Nick Frost), navigates the undead hordes to get their friends to some semblance of safety. Whether it’s the survivors play-acting as zombies for safe passage, plotting Shaun’s step-father’s demise, or busting a zombie down to the music of Queen… This movie is a load of laughs! It can also have some sad tones too. It’s a fantastic comedy in a horror setting!

Love this list of Halloween movies and pizza? There’s more to come in part two next week! In the meantime, enjoy these classic flicks. They’re all awesome and bound to make you jones for a quiet, stormy night of entertainment and deliciousness!

The Best (Or Worst) Of Wrestling on Hallowe’en

Spooks and frights and pro wrestling go together like zucchini in a chocolate cake. You wouldn’t expect one to be in the other, but...

Pizza and Halloween; we flat-out love them both! It gets even better when they happen together! Spooky season movies get us in the proper...