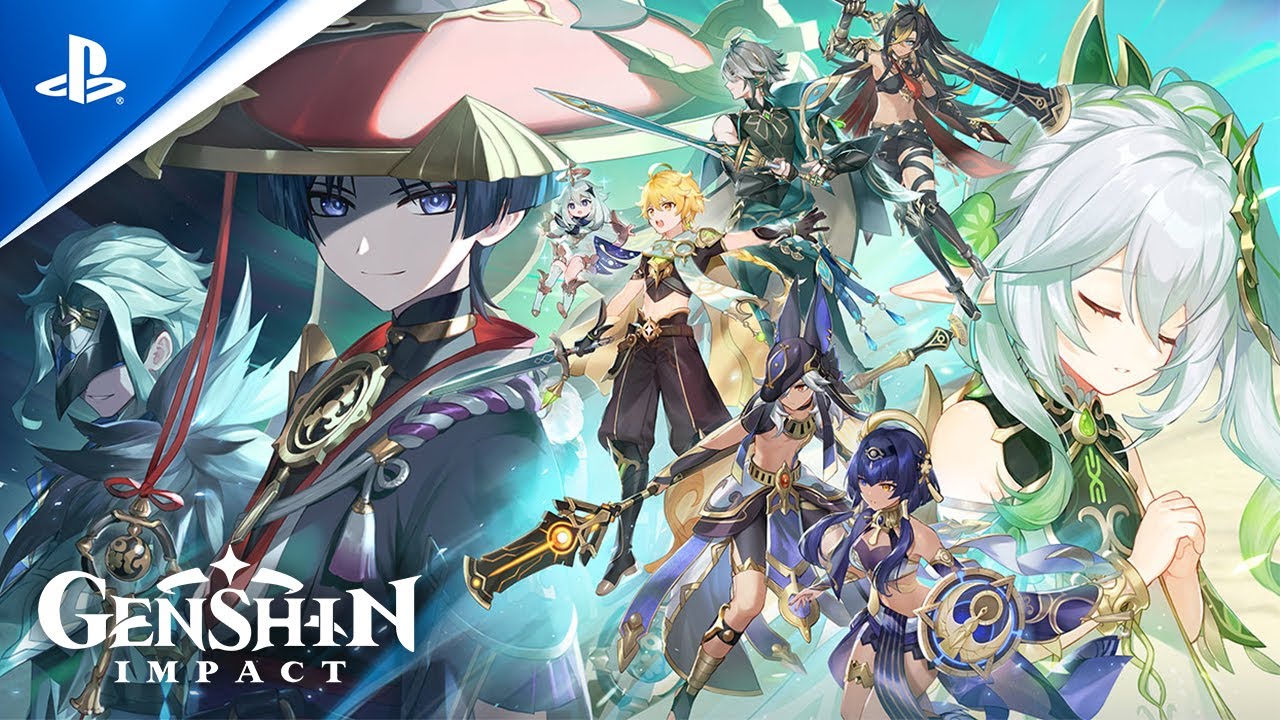 Genshin Impact 3.1 is coming to the F2P action-adventure RPG, and promised to be HUGE! This is large in-part due to Hoyoverse celebrating the Genshin Impact 2-Year Anniversary. New areas in Sumeru, including vast deserts and small oases, awaits us, hosting a variety of enemies and animals. Additionally, massive temples and structures contain secrets guarded by the inhabitants of this new, hidden world.

Following the official one-hour livestream on September 16th, Mihoyo also showcased new events, characters, and storylines to unlock and explore. With so much to cover, and the 3.1 update only a week away, let’s get started.

Archon Quest; Kusanali And The Akasha:

On August 24th, Mihoyo released the official Genshin Impact 3.0 Update. In addition to the new characters and events introduced, we were also greeted by the Dendro Archon, Kusanali. Although not much is known outside her official lore, she played a huge part in her small introduction.

During their journey within Sumeru, the Traveler meets Forest Ranger Tignahri, and Trainee Collei. Although she works really hard, Collei is limited to her duties as a Forest Ranger, as she is a host of a disease known as Eleazar. As the story progresses, the Traveler later arrives in Sumeru City to seek audience with the Dendro Archon.

After recieving a device called the Akasha Terminal, they later encounter their version of a ‘Groundhog Day’. With help from Lesser Lord Kusanali, they’re able to realize they’re in a dream loop through the Sumeru earpiece. However, through each loop, a befriended Dunyarzad, another host of Eleazar, seems to be getting medically worse.  Eventually, they find the host of the dream, Nilou, and break free before anymore damage is done. This revealed that the Akademiya may be plotting something big, though this remains to be seen.

Afterward, Kusanali briefly possess Katheryne of the Adventurers Guild in order to thank the Traveler in protecting the people. Although she was with us for a brief amount of time, Kusanali will possibly return in 3.1.

In the 3.1 Storyline, the Traveler recieves word of strange activity happening in Sumeru’s desert. Upon investigating, they learn that a group of Eremites, descendants of the kings servants, are plotting the return of the Scarlet King, one of Sumeru’s original rulers. According to Genshin Impact lore, the Scarlet King, Al-Ahmar, went insane after the death of his beloved, the Goddess of Flowers.

Additionally, the Eremites refuse to accept Greater Lord Rukkhadevata, after learning of her alleged betrayal to the Scarlet King. While what they’re planning is still unknown, one particular person of interest is sure to make waves.

That being said, let’s discuss those that will be making their grand appearence in Sumeru.

The Balladeer’s Return: Enter The Doctor!

You read that right, ladies and gentlemen. The 6th Fatui Harbinger, Scaramouche, will return to wreak havoc upon Sumeru. This time, however, he is not alone. Alongside him, Il Dottore, commonly referred to as ‘The Doctor’, will be making his debut within the next Archon Quest.

What really makes this man stand out, is that he, like Collei and Tighnari, originate from the official Genshin Impact Webtoon. Although he briefly appeared in A Winter Night’s Lazzo alongside his fellow Harbingers, he’ll be certain to take part in Sumeru’s forseen destruction. It should also be noted that he is seen in the latest 3.1 trailer, appearing to have succeeded in finalizing an experiment involved with Sumeru’s people.

As for Scaramouche, he appears to be planning on overthrowing the Electro Archon, Raiden Ei. In the trailer, he is shown to have given himself a gigantic, robotic exoskeleton, similar to that of Ei’s true form. Prior to this, the Fatui did mention that after the Balladeer came into possesion of the Electro Gnosis, he vanished. Therefore, it’s presumed that what we see in the trailer is Scaramouche’s attempt at becoming the new Electro Archon.

However, only time will tell. I, for one, can’t wait to see what the next Archon Quest has in store for us. With that being said, let’s now talk about the new characters we’ll be meeting upon the update’s release.

The Defenders Of The Oasis; Of Sabers and Dancers:

Genshin Impact’s newest update will also introduce another batch of characters. Although we already know Nilou, from teh Archon Quest, two new playable characters will also be joining the roster:

All three characters will be available for Wishing, with Cyno and Nilou being 5-stars, and Candace standing as a 4-Star. Though, as i’ve come to learn, always make sure you place your rolls correctly. Wouldn’t want to be on the same fund level as Mona.

An even more exciting event alongside the Cyno and Nilou banners are the reruns for both Anemo God Venti and Alchemist Albedo. According to Hoyovere’s official Twitter, Cyno and Venti will have their banners cover the first half of 3.1 (Sep 28th). Following after (~Oct 12th), Nilou and Albedo will cover the second half. In addtion, Candace, the 4-Star Electro character will be available for wishing alongside the first half of 3.1.

Speaking of special characters, if you missed your chance of receiving Collei during the Graven Innocence event in 3.0, don’t worry, as she’ll be available to collect until September 27th. Secondly, even if you miss that chance, Genshin Impact will allow players to dive back into the Spiral Abyss. Upon completing Floor 4-Chamber 3, players will be gifted the Dendro archer for free.

Ballads and Brews event in Mondstadt. Image from hoyolab.com

In addition to the release of Genshin Impact 3.1, players will also return to the fair city of Mondstadt. Here, we will be introduced to Mika, a Surveyor of the Reconnaissance Company of the Favonius Knights. The city of freedom is in full-swing celebration of the Anemo Archon. As such, players will be able to partake in one of many special events coming to 3.1:

Of Ballads And Brews: This event comes with four different games:

+ Autumn Crisis– Boars from the wilderness have taken up refuge close to Mondstadt homes. Its your job to clear them out. However, avoid using your elemental skills to avoid a ruckus.

+ Charity and Creativity– It’s time to open shop, and make tons of Mora. Have NPC’s help you sell well made merchandise, and receive rewards for completing customer requests.

+ Fecund Blessings– Scattered across Teyvat are numerous barrels containing special rewards. Use clues to find them, and you may even find some to help run your shop a little better.

What’s even better is that you’ll be joined by Razor, Venti, Klee, and Albedo in celebration of the Anemo Archon (Kind of ironic on Venti’s part, though). With these new festivities coming our way, i’m very excited to venture back to the city of Mondstadt.

Enter The Ring, Collect The Coins!

The Hyakunin Ikki Trials returns to Genshin Impact, once more. For those unfamiliar, this event allows you to send either your team or a set of Trial Characters into an arena to face off against powerful foes. Don’t worry, as the event will grant your characters certain buffs to improve combat efficiency. Gather enough energy to do even more damage and earn rewards for the most points you collect.

Additionally, the Wind Chaser event will also be making a glorious comeback. In this event, players must make their way across domains, collecting coins along the way. The faster you collect, the more rewards you’ll earn.

Written In The Stars:

During the Star Seeker’s Sojourn event, a child named Banu needs your help in seeking ‘Future Stars’. Similar to Lost Riches, players must use the clues given to them through the maps provided and locate said stars. Upon doing so will promise big rewards.

In addition to these events, Genshin Impact will also be giving players the Path Of Gleaming Jade. All that is required is for daily logins as you conitinue to enjoy the 3.1 Update. In addition, Hoyoverse also requested players check their in-game mail occasionally, as they promise even bigger rewards for your continued support. These rewards are as follows:

As far as we’re concerned, these rewards might come in small increments, so don’t get your heart racing right away. With everyone busy fighting new bosses and enemies coming to Genshin Impact 3.1, let’s look forward to the new adventures that await.

We’d like to hear from you, though, fellow reader! If you have something you’re excited about coming to the rather enormous update, share it with us in the comments below. Also, be sure to checkl out our Facebook page, as we like to keep our readers up-to-date on the latest info.

May the wind guide you, travelers! And, as always, Stay Geeky!