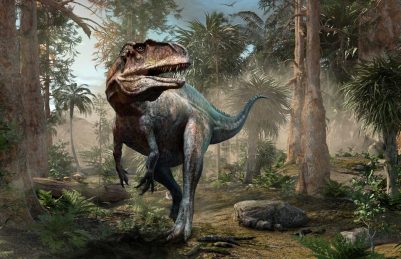 Image from the Houston Chronicle

It has recently been reported by mysanantonio.com that, Shark Tank cast member and owner of the Dallas Mavericks, Mark Cuban wants to turn a small Texas town that he owns into a real-life Jurassic Park. Hearing this news, I don’t think that he watched the same Jurassic Park movies that the rest of us have. This is the kind of news that should have us pondering this: Just because we have the technology and resources, doesn’t mean that we should use it.

Fortunately, the plan is not to clone dinosaurs to bring them to the 21st century. This idea cam to Cuban after he invested in a company called Dino Don that specialized it animatronic life size dinosaurs. Most of us are familiar with Dino Don even if we didn’t know him by name, he is the creator of many of Hollywood’s dinosaur creations including those seen in Jurassic Park.

Think about the Possibilities

Let’s stop and think about this for a minute, Jurassic Park is an amazing piece of science fiction aimed at teaching us the dangers of using science in a manner that is irresponsible. Like building a dinosaur park in the middle of Texas. Now in his defense. As mentioned, before he’s not planning on using actual dinosaurs, he’s planning on having the dinosaurs in town be animatronic. So, robot dinosaurs, what could possibly go wrong?

I’m beginning to question if he has ever watched a science fiction movie. Mechanical devices, software to make them move around, remote enabled. There may even be a component of artificial intelligence (AI) already in the software. Sophisticated AI software is becoming more advanced every day, this type of advancement can lead to a level of unpredictability. What happens if something unpredictable happens and they are unable to shut down the animatronic? This is thousands of pounds of metal, the liability risk for something of this nature is very high.

Many of you may be asking yourself what my problem is with the idea of a dinosaur park. I honestly love the idea. As a kid who grew up going to Sinclair, Wyoming every year specifically to go to the dinosaur museums and the fossil digs. I love dinosaurs.  My favorite part of trips to the Salt lake City Museum of Natural History was the dinosaur exhibits. But the thought of a Dinosaur town amusement park sounds like the twisted workings of a mad scientist and a rich guy who doesn’t know better.

Science fiction films throughout the decades have shown us that while technology can enhance our lives, if we’re not careful it can also cause problems. Would all of us dinosaur fans love to see our favorite dinosaur walking in the wild? Or course we would. Do we want to get trampled by a 3 ton machine if something goes wrong? That’s a No. I’m sure there would be safety protocols, Mark Cuban is a smart businessman. Alas, you can’t plan for every eventuality. I think it would be a shame for something like this to come to be and have somebody tragically injured which could result in closure of the park.