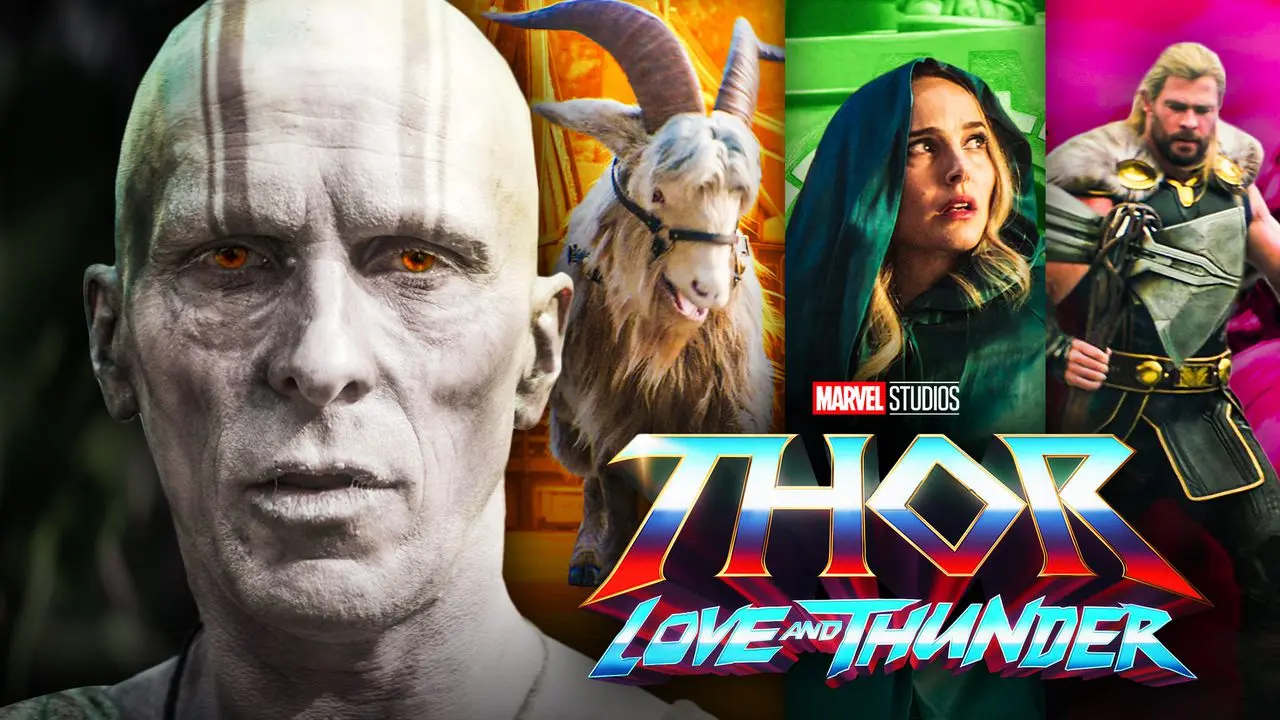 Thor: Love and Thunder (2022) isn’t a terrible Thor movie, but shows more “meh..” than a Shania Twain ballad about being impressed! Lots of people went to see it on its opening weekend; yet audiences and critics aren’t reviewing as favorably with this fourth film featuring that Asgardian hunk. It’s got plenty of action! It’s got a lot of color and jamming soundtrack like Thor: Ragnarok (2017) did; albeit focusing more on the works of Guns N’ Roses this time. It has a heck of a solid, relatable villain! But that’s about as good as it gets.

These are totes Thor’s goats! Picture credit to slashfilm.com

Joshua Vick, member of Geek News Now fan page The GNN Greats, didn’t enjoy the movie’s attempts at humor: “Meh, I feel they tried too hard to be comedic, honestly. The slapstick humor throughout was just slightly off-putting to me. I absolutely loved the goats, and I feel they would have carried the ‘Ragnarok‘ feel of comedy throughout the movie. Thor being overly childish in most cases, was just meh.”

The goats… Thor’s pets… Yeah, I laughed the first couple of times they let out those screams at awkwardly timed moments; then thought after the seventh or eighth time they used this comedic gimmick I felt very “okay, they scream, we get it…” And most of the movie feels this way; like director Taika Waititi trying too hard to make Ragnarok lighting strike twice!

Well, it did and it didn’t…

Thor in his third and fourth movies: Ragnarok and Love and Thunder! Picture credit to gamerant.com

Let’s consider a few facts: over its opening weekend, Love and Thunder raked in $302 million globally ($143 million in the U.S.; $159 million overseas). By comparison: Ragnarok opened in the U.S. to $123 million while the original Thor (2011) opened to $65 million. At a budget of $250 million, Love and Thunder made its money back and then some. The Thor movies have grown in popularity, and Love and Thunder looks to be a financial success.

A cheap joke everybody chuckled at! Picture credit to aroged.com

Some of those critics said:

“The film is an aesthetic and storytelling mess from beginning to end, never knowing exactly what it wants to achieve while hindering most of its emotionally investing moments in favor of unfunny and irritating jokes.” — Maxance Vincent of “Cultured Vultures”

Gorr in all his haunting glory! Picture credit to firstpost.com

***SPOILER ABOUT GORR AHEAD***

The big draw is the villain: Gorr the God Butcher (Christian Bale)… Gorr kidnaps Asgardian children (and scares the crap out of them) to lure Thor (Chris Hemsworth) out. He looks like an insane wraith of a figure as the Necrosword and his mission poison his very being. He goes to these lengths because his deity mocked his pain after the latter lost his daughter to starvation. The deity laughed at Gorr’s hope that he and his daughter will enter eternal paradise, telling Gorr there is no such thing. He concludes that Gorr’s death means nothing because others will provide worship.

And this part of the movie is easily the most intriguing point which should’ve been the focus! Exploration of what drives someone to go to impossible and dark lengths to seek vengeance on deities. Gorr is that part of us when we feel betrayed in our faiths. This could have tied in with Thor’s own quest in a wide universe seeking where he belongs!

Mighty Thor/Jane Foster (left) and Thor Odinson (right); will they or won’t they find love? Picture credit to editorial.rottentomatoes.com

Instead, the movie spends time having playfully awkward banter showing how Thor hasn’t gotten over Jane Foster (Natalie Portman). We also get joke after joke, colorful displays of CGI, and screaming goats… It could have been amazing and deep, but it tried too hard to be a people-pleaser.

Thor: Love and Thunder may be a financial hit, but it’s very “meh” as stories go. Expect nothing but colorful Marvel filler which doesn’t seem to connect with Phase 4 in any way. I don’t recommend it.

Taika Waititi found himself in the news recently, after throngs of clueless fans started sounding off angrily after he made an obvious joke.  This...

Thor: Love and Thunder star Chris Hemsworth recently confirmed filming for said movie begins in January. After speculation that the process would begin in...