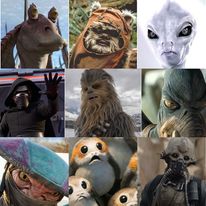 I recently started playing the Star Wars: The Old Republic MMO this past week and was looking forward to experiencing the game. When it came time to create my character I was a bit dismayed, but not surprised, to see so many of the alien races were locked behind the subscription paywall.

Fortunately I almost always play as a human in most of these games (Hume in Final Fantasy XIV Online as well) so I didn’t feel that bad about it. But this got me thinking; If I could be a race from Start Wars besides just a standard human, what would I be?

The red-eyed Chiss like Grand Admiral Thrawn are pretty cool and intimidating. A Nautolan like Kit Fisto with the cool tentacle head and being able to breathe underwater, that would be awesome. Perhaps a Twi’lek? So I did some digging and have come up with some insightful info. What about you? What race/species might suit you the most? let’s find out!

There are three races available by default, but ten of them are locked behind The Old Republic’s monthly subscription paywall. That’s fair I suppose, it makes sense for them to want you to subscribe.

Are you fiercely independent? Are you the kind of person who is self-employed because you can’t stomach the idea of working under an unappreciative demanding boss? Do you also prefer a nice juicy rare steak over a chef’s salad (whatever that is)? Then you would be the perfect Zabrak!

The Zabrak are a horn-headed humanoid from the Iridonia system. You might already be well-acquainted to the species through Darth Maul, who is a male sith Zabrak. The Zabrak are carnivorous, have two hearts, and are often covered in facial tattoos that have tribal/familial meaning.

Darth Maul, the most famous Zabrak in Star Wars.

They usually take up professions that have little managerial oversight or offer a degree of freedom such as being: Bounty Hunters, Jedi, Self-employed merchants/traders, etc. The Zabrak are so fiercely independent that many of them joined the rebellion when the Galactic Empire came to power, and the Resistance when the First Order came to prominence.

Are you an appreciator of fine art? Are you like Dominic Toretto and believe family is more important than anything else? Do you keep your word and break it for no one (like Tony Montana)? Then in an alternate reality (A Star Wars one) you may have been a Chiss.

The infamous Chiss Imperial, Thrawn (Left) along with his second-in-command, Pellaeon.

The Chiss are a blue-skinned, dark-blue-haired, and red-eyed alien humanoid race. They hail from the unknown regions and are so secretive that their existence is but a rumor to most of the galaxy. Perhaps the most well known Chiss of all is Grand Admiral Thrawn, a calculated military leader. Thrawn would study a culture’s art to understand their way of thinking, even their military strategy.

The Chiss are not known for being force-sensitive and it is quite rare for anyone other than the females of the species to possess the force in some way.

Would you consider yourself a colorful individual? Are you possibly bilingual or someone intimately familiar with sign-language? A lover of spicy food? A Twi-lek you may be! Twi-leks are one of the most common/plentiful alien species in Star Wars lore.

They have twin leks/head tails and their skin color runs the gamut across the spectrum. Green-skinned Oola from Return of the Jedi, Blue-skinned Jedi Knight Aayla Secure from Revenge of the Sith, even Red-skinned lady of the sith Darth Talon from the (Legends) Star Wars Legacy comics series. Even pale-skinned Garsa Fwip.

Twi-leks can use their lek appendages to communicate similar to sign language and even have their own language (Twi’leki) that implements the movement of their leks. The Twi’lek home world of Ryloth is harsh and unhospitable. The “exotic” nature of female Twi’leks has unfortunately led to many of them being trafficked and enslaved, just like Oola.

Are you someone who knows the limit of your own intelligence? Do you believe every problem is a nail and your mean right hook is “the hammer’? Is your hygiene low on the priority list? Do you swear like a drunken sailor and feel the need to lace every sentence with the F-word? Do you prefer to grunt and point when your significant other asks you where something is? I’m sorry to say it, but you are a Gamorrean.

Gamorreans are a green skinned alien species with hog-like features. To us they are infamously known as Jabba’s guards and later Boba Fett’s loyal guards. Male Gamorreans are especially stupid and live in clans lead by matriarchs. Their home world is Gamorr in the Outer Rim.

Gamorreans are said to respect profanity and vulgarity so much so that they don’t even mind being insulted to their face. Talk about having thick skin. They are fond of their brutish strength that they will almost always prefer to use melee weapons over blasters such as axes and vibroblades. Yeah, you’d be hard-pressed to find anyone who would say that Gamorreans are their ideal alien race from Star Wars.

When nature calls, do you answer? Do you dream of one day living in a log cabin high in the mountains? Enjoy feeling the moist dirt beneath your feet and in-between your toes? Do you think shoes are oppressive and want to get back to nature? Are ornate headdresses something you think are beautiful and cool? Fan of dangling leku but think that Twi-leks are too mainstream? Are you a fierce adherent of ‘castle doctrine’ and protecting your home rather than fleeing for your life? Then it is likely that you are a Togruta as these are all traits that they have!

Ahsoka Tano edges out Shaak-Ti for most important Togruta in Star Wars. Image from DorkSideOfTheForce.

Togruta are one of the rarer species in the galaxy but do have a disproportionate amount of Jedi members. As a result the species overall has a deep respect for the Jedi Order. They are known for being team players and banding together for survival. They have sharp teeth and are pack hunters as they do have natural predators, making isolation a death sentence for any individualistic Togruta.

They are also known to feel anxiety about isolation, which makes Ahsoka’s self-imposed Jedi exile a bit of a strange move. It is said that their montrals/horns, as sensory organs, enhance their affinity for the force. This could explain why they make up a sizable portion of the Jedi Order.

Fond of holo-chess are you? Do you think you would have a good relationship with Yoda? Do you like to work with your hands, whether it’s onboard a freighter or carving wooden instruments? Have an abnormal love of trees and like to grow out your body hair beyond what is socially acceptable?

Are loyalty, friendship, and keeping your word your most important traits? Do you simply enjoy letting out a guttural roar and always think with your stomach? Simply put, you’re a Wookiee (hairy).

The Wookiees fight to keep the CIS off of Kashyyyk.

Wookiees are known to honor life-debts, that is lifelong servitude/companionship in exchange for being saved from a terrible fate. So you could say they are the best friends you can have. Such is the bond between Han Solo and Chewbacca.

Wookiees have on occasion also ripped arms out of sockets of droids and others that have angered them. Please, don’t do that. They spend a lot of time in their treetop homes and are known to be remarkable craftsmen and weapon-smiths with just wood, metal, and stones/gems (yeah. we can substitute your Lego kits here).

Obviously we could go on and on about all the different alien species found in the Star Wars universe. But then I would be typing away for years. I may even return and amend this by adding more later though! Comment below which Star Wars species you feel you are, or which you would have liked added to this list! Personally I think I would be a great Chiss. Make sure to subscribe to GeekNewsNow and follow our socials all May-long as we continue with Star Wars month coverage leading up to Celebration Anaheim. As always, stay geeky out there!