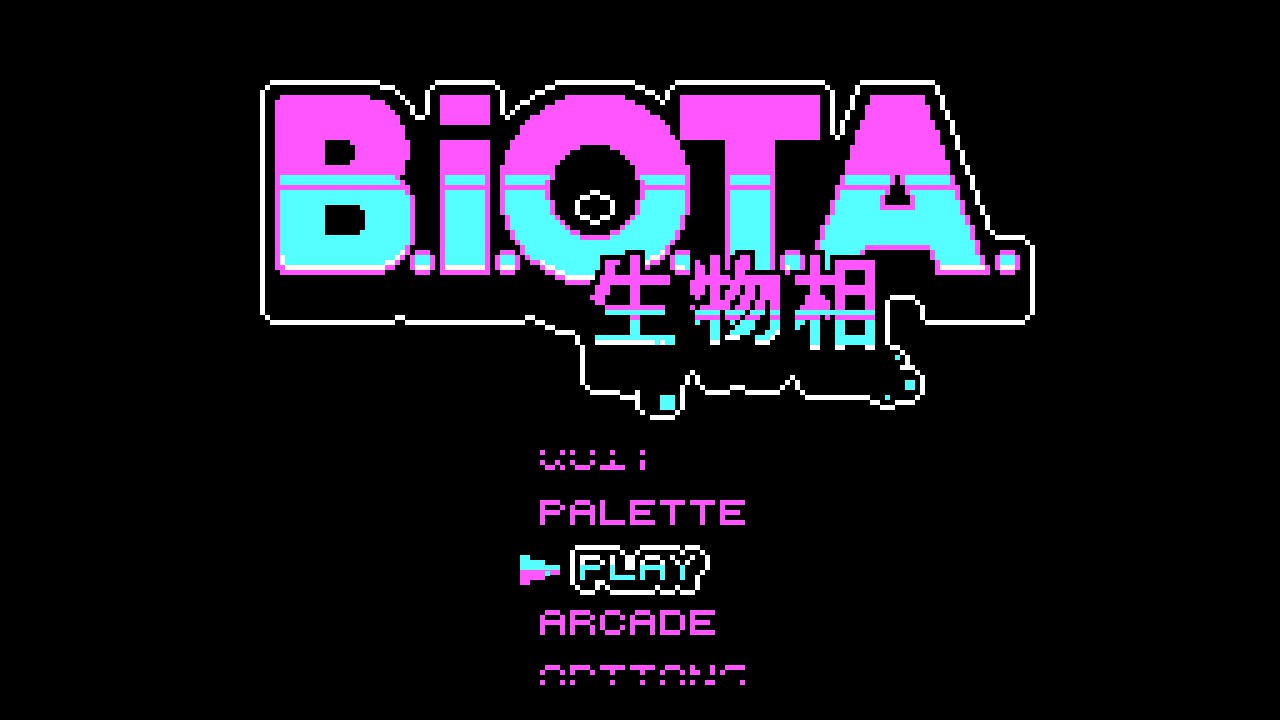 B.I.O.T.A. is a 2D Metroidvania-style game that puts it’s retro inspiration front-and-center! Developed by Small Bros and published by Retrovibe, B.I.O.T.A. is a retro side-scrolling platformer that takes me back to when I would play Contra on the NES and the Batman movie game on the ol’ fat Gameboy, and I appreciate that.

The game’s story begins with a crackshot team of mercenaries, Gemini II Squad, heading to an isolated mining colony that has stopped reporting back and is infected with an alien pathogen. The game very much wears it’s Aliens inspiration on the sleeve and it makes for a great pairing with the retro aspect. Real talk, before we get into the game more I was given a steam/review code for this game. As for now, B.I.O.T.A. is only available on PC.

B.I.O.T.A.’s pixel art is really simple, pretty, and is generally just nice to look at. You can unlock different palette/color-shades that replace the four primary color tones by progressing throughout the game.

The Gemini II squad, whose members serve as the different playable characters in the game.

B.I.O.T.A. initially gives the player five playable characters (you can unlock additional characters later) with different specializations (Sub-machine gun, shotgun, pistol, rifle, etc.). The different weapons / characters have different strengths (rate of fire and range) but I found the short-range sub-machine gun to be my favorite loadout. The game is challenging in it’s gameplay but pretty forgiving in other ways.

Coming into contact with an environmental hazard (spinning metal blades, acid pits, etc.) will be met with an instant game over and you will return to your last save point. Fortunately you do have a health bar and it takes about 6-8 hits before your character kicks the bucket. Furthermore you can manually save so you can technically save-scum an area but you have to be careful where you save if you’re only one hit away from death. There is a wide variety of alien enemies that behave and move differently and they will keep you on your toes.

The player can visit an in-game black market where one can spend currency acquired from killing enemies to purchase expansion slots for carrying more ammo, currency, refilling special weapon ammo, and teleporters.

Battling against one of the game’s major bosses.

My favorite mechanic is the wall jump that lets you gradually climb a wall by adhering to it. This feature makes for some very enjoyable platforming sections that feel like Celeste or Super Meatboy but  less frustrating. The title does a good job of replicating retro mechanics where if you leave the screen and return all the enemies have respawned. It can kinda be annoying when revisiting previous areas, but it does keep the game engaging rather than retreading a bunch of empty screens.

There are not many opportunities to heal, so the player will need to develop their platforming and combat skills if they wish to make meaningful progress throughout. Lastly there is an Arcade mode where you get to shoot targets and other shooting mini-games to try and rack up a high score. It’s a fun shooting-gallery distraction but not a substantial one.

Arcade mode is a different beast than the main campaign.

The game’s level design and layout is pretty plain. However you will be spending quite a bit of time wandering around aimlessly looking for that key or button, and that can feel frustrating at times. I know I’m going to put more time into it since it is a relatively short game, but it’s going to be slow going for a while. I can’t give it a score since it is a review-in-progress, I will come back later and do that. But what I can say is the game is charming and a bit nostalgic with a few rough edges.

For all things geeky make sure to subscribe to GeekNewsNow and follow our Twitter here. If you’re into videogames and videogame news in general be sure to check out the gaming podcast I host, DuoSense Podcast! Also check out all the other gaming opinion pieces and reviews I have done if possible. As always, stay geeky!