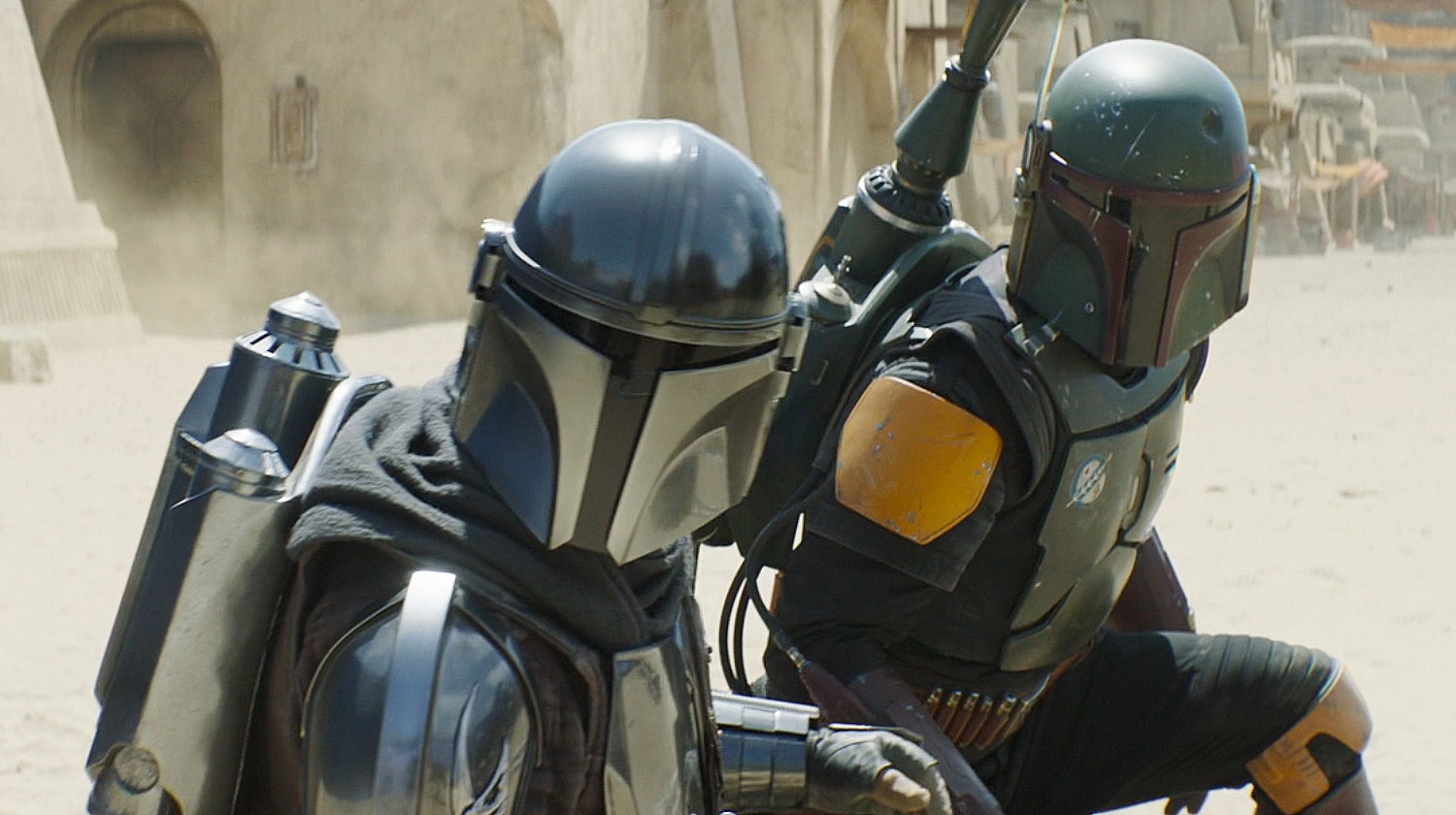 For a character with only three lines (two, if you don’t count the Wilhelm Scream) in two movies, Boba Fett sure has made a name for himself over the last forty-five years.

Since his first cinematic appearance in “The Empire Strikes Back” Boba Fett has become a fan favorite, due to his unique armor, and mysterious nature.

The mystery behind the mask.  The supercool weaponry.  The sleek, menacing movement of the Slave 1.  Boba Fett was the epitome of cool in the “Star Wars” Universe.  He was the most feared bounty hunter in the Galaxy, up until his unceremonious exit into the Sarlacc Pit.

The Slave 1 is one of the coolest ships created for the Star Wars Universe. It is severely underused in Boba Fett’s own show.

Then, slowly, the “cool” was stripped away.  First, it was revealed in Episode 2 that Boba Fett was just a clone. Nothing special, nothing unique, nothing to make him stand out against the hundreds of millions of clones just like him. A much cooler story would have been about him being a rebel Mandalorian that turns his back on tradition.  After which, he goes on to training to become a master combatant, and bounty hunter.

Instead, he is essentially a Clone Trooper. Just another face in the crowd.

Then, you have “The Book of Boba Fett” in which Fett fights his way out of the Sarlacc Pit.  For some strange reason he holsters his weapons, and becomes a borderline pacifist.  Sure, he refers to himself as a crime boss. However, one could say that he’s a crime boss in a way that is comparable to calling Homer Simpson a nuclear power plant employee.

Just because its technically true, doesn’t mean that it has to be taken seriously. The show was such a miss, even Temeura Morrison openly expressed his problems with the direction of the character.

Just imagine for one second… What if The Mandalorian, and Boba Fett switched roles as characters?  It would work on so many levels.  If you had Fett as the protagonist in “The Mandalorian” there would be so many things that would work for the story.

Luke Skywalker, and Boba Fett were engaged in battle, shortly before Han Solo accidentally knocked Fett into the Sarlacc Pit.

The philosophy of The Mandalorian character was much better suited for  the character that Fett becomes in his series.  The second show shouldn’t really even be necessary, had the first show been done right.  You could have a couple of episodes focus on him (Like they did anyway). Then fold him into the series as Fett’s moral compass. He would also act as a calm balance to Fennec’s fiery nature.

This formula would not only cut production costs on two versions of what is essentially the same show.  it would make the fans happy after the disappointment that they faced in the theaters with “Solo”  and The New Trilogy.  You would also still cultivate the new fanbase that came with Grogu.  Grogu is so popular, if this was the eighties; he would have had a hit song written about him bumping in the clubs. Move over, “Pac Man Fever”  it’s time for “Grogu Gets Down”.

With the focus on those characters consolidated into one show, that would allow Lucasfilm to expand the universe with a new character spinoff; giving us more variety.  Maybe give Bill Burr his own series. Do a series on the Hutts, or even have Fennec branch off, and do her thing.

What do you think, Star Wars Fans?  Would this have been a better path?  Are the shows perfect just the way they are? Or, would you do it another way?  I would love to hear some of your ideas.  So feel free to leave a comment, and let us know how you feel!

Thank You for reading.  When I am not writing, I enjoy my time with my wife Barbara, my two year old daughter Frankie, my Loyal Hound Dog, Marbles, and My Dedicated Ferret, Ms. Farrah Pawcett.  For More fresh, Geeky Content check us out at https://www.youtube.com/geeknewsnow  You can also follow me on Twitch.  My handle is insomniac_reader