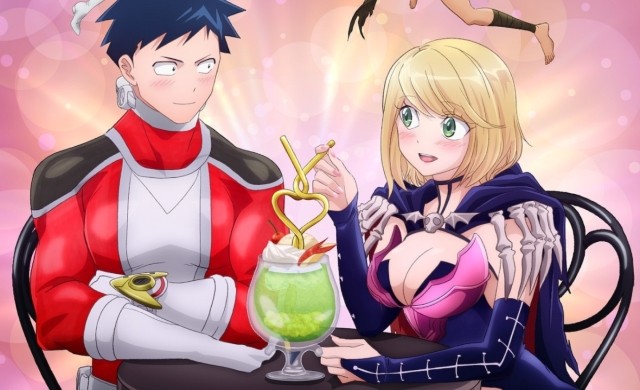 Love After World Domination arrived to Crunchyroll on April 8th. The story takes place in modern-day Japan, where an evil organization code-named ‘Gekko’ formed. Their goal is to burn the entire planet by forming monsters created by humanity’s negativity. To combat this, a hero organization named Freezing Sentai Gelato 5 banded together to stop this underlying threat. However, as the old saying goes, love really does bloom on the battlefield.

The story follows Red Gelato leader, Fudō Aikawa, and Reaper Princess, Desumi Magahara. Following a quick encounter on the battlefield, Red becomes smitten with her right away. After calling her to an abandoned warehouse, he confesses to her despite her doubt and disbelief. However, seeing how serious he is, the two begin to date in secret.

Hiroshi Noda wrote the original story, and Takahiro Wakamatsu worked on illustration for the manga. The original manga began serialization back in November of 2019. Although not wildly known, Love After World Domination has five novels published as of April 2022.

Following the publication of the manga, an anime adaptation, produced by Studio 9, followed soon after the release of Volume 4. Studio 9 produced works included Didn’t I Say to Make My Abilities Average in the Next Life?!, and Higehiro. Originally, the series was set to air on Funimation. However, following Sony’s purchase of Crunchyroll. the series moved to the latter streaming service.

Yuusuke Koboyashi as the voice of Fudō Aikawa. Image from myanimelist.net

You can’t have an anime adaptation without the cast, of course. And what better way than to cast Yuusuke Koboyashi as Fudō Aikawa, and Ikumi Hasegawa as Desumi Magahara.

Yuusuke Koboyashi portrayed a solid good number of characters during his voice acting career. These include Senkuu from Dr. Stone, and Subaru from Re: Zero.

Ikumi Hasegawa as the voice of Desumi Magahara. Image from myanimelist.net

Ikumi Hasegawa also obtained a well-rounded profile during her career. During her time as a voice actor, she performed a solid number of support roles. These included Mitori Tajima from Happy Sugar life, and Aisha Udgard from How a Realist Hero Rebuilt The Kingdom. However, her most famous role she acquired included Vladilena Milizé from the 86 series.

With such an interesting and amazing cast behind the scenes of an equally intriguing anime, perhaps Love After World Domination just might become one of the best adaptations out there.

Love After World Domination continues to air on Crunchyroll. Currently, there are three episodes, as the adaptation is still fairly new. The manga, on the other hand, published up to three volumes in America where available.

And, that’s all there is to it, folks. If you’ve seen this Power Rangers love story and want to share your opinion. feel free to leave a comment down below. Also, feel free to check out our Facebook page, as we keep up to date on the latest happenings. As Always, Stay Geeky!

Love In The Time Of LightSpeed

When we think of Star Wars many of us think of the Force, Jedi and Sith, space battles, lightsabers, and such. But perhaps one...