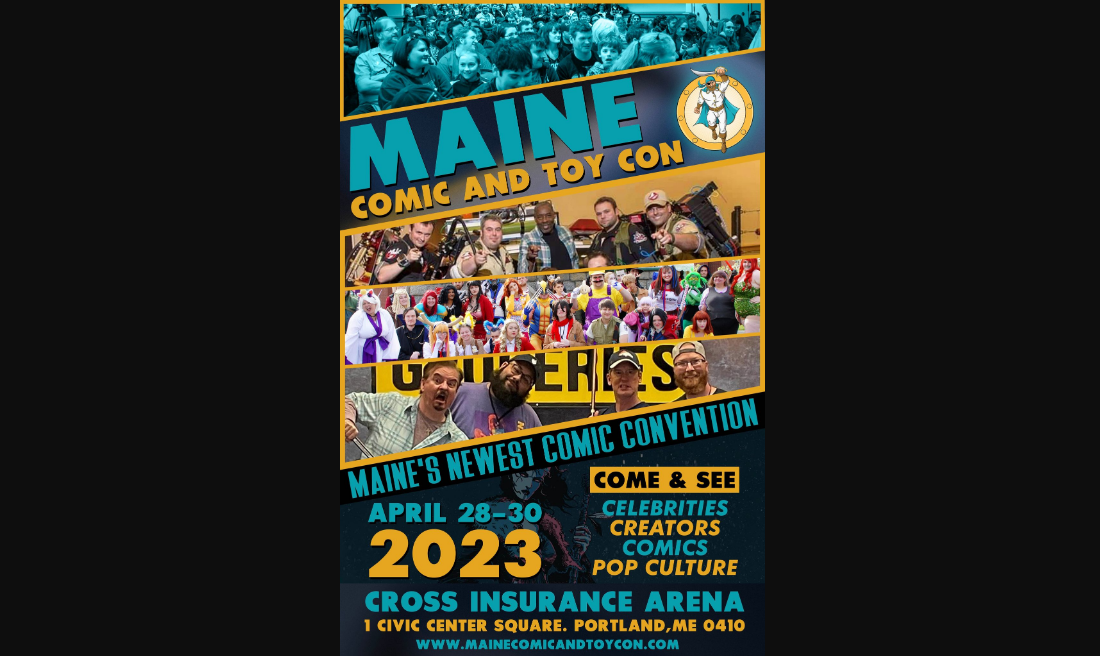 Feast your eyes on the latest con-going experience: Maine Comic and Toy Con! This event, announced April 23rd by the owners of the Bangor Comic & Toy Con (BC&TC), is to be a new and wonderful option for Mainers (and nearby states) to participate in one of the bigger types of cons! Meaning a bigger venue, and bigger names in the list of celebrity guests!

Will Hesketh, Jr. and Jay Cochran — co-owners of both the Bangor Comic & Toy Con and now the Maine Comic and Toy Con! Picture credit to newscentermaine.com

“We are very excited because it brings us a larger population, it brings us closer to other major city hubs, and just-… there’s so much going on and so many tie-ins!” said Hesketh in an interview with Geek News Now.

An example of the kinds of rooms where panels could be held at Portland’s Aura location! Picture credit to wbrcae.com

There’s the Aura music venue — right across the street from the Cross Insurance Arena — which Hesketh and Cochran will partner with to host the panel discussions. Even for the panels, it’s a whole bigger level than they’re used to. It’s a concert venue with staging, lighting, a twenty-five foot video board behind that can play clips of the actors’ films or having images scroll behind them.

Already, the Maine Comic and Toy Con has six guests lined up and Hesketh said “this is going to be a huge event as far as that piece goes!”

Sadly — but not unexpectedly — until the con gets closer, the guests and official schedule with a listing of events is not yet revealed. But if you’re patient, time will reveal awesome surprises; of that, I’m certain. This is Hesketh and Cochran taking their love of comic cons and wowing their attendees to a higher level!

The Cross Insurance Arena exterior in Portland, ME! Picture credit to wbrcae.com

“This is something Jay and I have wanted to do for years!” said Hesketh. “Portland’s really the next big step if we wanna continue to grow this. And for us, like, we need to get in and do this before somebody else does. Before somebody else big like, you know, Rhode Island or another major convention company’s like ‘well look, if they’re bringing six-and-a-half thousand people to Bangor of all places, what can we be bringing to Portland instead?'”

Hesketh shared that many artists and vendors associated with BC&TC feel left out of the handful of cons in Portland. Some of them live in Portland and yet their home convention is the Bangor Comic & Toy Con. He is happy to open up an avenue for these groups while having their support.

A wide view of the entirety of the floor space at Portland’s Cross Insurance Arena! Picture credit to crossarenaportland.com

“Portland has a lot of cool things happening down there, but none of those things are focused around what we are doing as far as convention style goes.” Hesketh also said. “And all of them are more summer/fall, you know, later in the year events. So for us to do this in the spring, it allows it to give multiple events down in Portland but not be right on top of those other events. And allow them to be able to also hopefully promote their events at our event.”

When asked about the fate of the Bangor Comic & Toy Con, Hesketh had this to say: “Bangor’s our home! Bangor’s the reason why me and Jay are even able to do the things we’re able to do. So there’s a very real calling, a very real love for it here. That won’t be going away! But yes, it will become more of a fall convention.”

This is the Cross Insurance Center Arena in Bangor, ME! Picture credit to ace-corp.net

Except for 2022, because this fall — September 30th, October 1st-2nd — the BC&TC is putting on Weekend of the Wicked! It’s a Halloween/Horror themed mid-way convention. This event marks the return of the BC&TC’s events to the city of Bangor’s Cross Insurance Center. It also marks the con company’s first event in the bigger arena instead of the grand ballroom!

“We’ve never even done the BCTC in the arena!” said Hesketh. “So to move this to an arena is just absolutely crazy! But we’ve got a lot of really cool things lined up; we went from two guests to now we’ve got, like, eight or nine in total!”

The co-owners of Bangor Comic & Toy Con have awesome things coming to any Maine (or New England) comic con goers! They’re taking their talents with the successes of BC&TC — which Hesketh said saw over 6,000 attendees in 2021 –to a whole new level and new convention: Maine Comic and Toy Con! I’m officially jazzed to go to this!

Maine Comic and Toy Con takes place at the Cross Insurance Arena located at 1 Civic Center Square in Portland, ME. on April 28th-30th, 2023! Check out their website and Facebook page! Also, subscribe to Geek News Now and give it a like on its Facebook page!