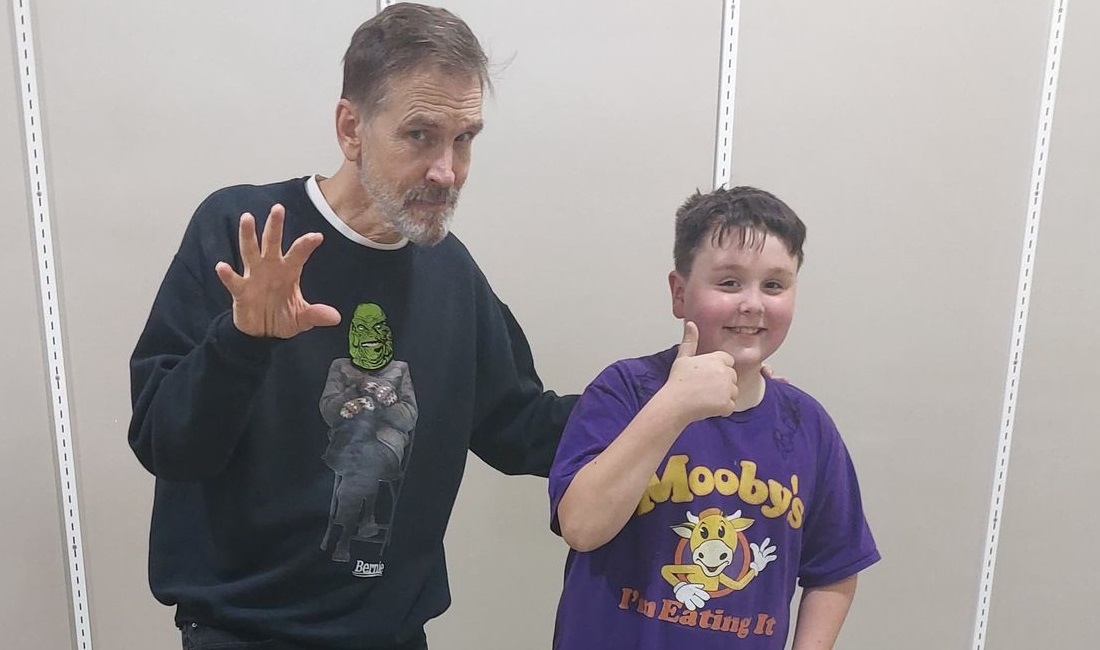 Nine year-old third grader Seamus Colby of Bar Harbor, ME had a tough time recently. Not only was Seamus originally unable to attend this year’s Bangor Comic & Toy Con (BC&TC), but he also endured disappointment of not being invited back to participate in his school’s Dungeons & Dragons (D&D) group. But Seamus’ luck changed for the better after all!

“Famous Seamus Colby” in the midst of one of his fundraiser events! Picture credit to Winter Colby

If you’re from the “down east” region of Maine (Washington and Hancock counties), you may have heard of “Famous Seamus Colby” and his fundraiser endeavors! He’s done work for animal shelters and providing supplies for kids at his school; making sure that no-one feel left out. He believes in bettering quality of life for man and animal kind alike.

“Every life should be supported; even dogs.” said Seamus. “Dogs have lives, bunnies have lives, everything has lives.”

Geek News Now tried to find why Seamus had been asked not to return to the after-school D&D group. Attempts to reach out to his school on April 7th and 12th were not returned as of this publication. Whatever the circumstances, Seamus’ story reached certain eyes and it changed for the better!

“If he can’t be part of their Dnd (sic) group then he is always welcome to be part of our BCTC family.” read a post on the BC&TC Facebook page. “Help us reach [Seamus] so we can get this little guy to the con. Will even get him in with our DND (sic) guys.”

The outpouring of support for Seamus came in! Not just from BC&TC, but folks who both had and had not heard of the lad shared a word or two of encouragement. Some mentioned they had family who would gladly paint Seamus a mini figure for when he does get to play D&D. Others noted his work as a local fundraiser.

“We agreed we would roll out the red carpet for him and invite him to join the BCTC family.” said BC&TC co-owner Will Hesketh, Jr. in an interview with Geek News Now on April 8th.

The two con owners — Hesketh and Jay Cochran — contacted Seamus’ mother Winter Colby and told her what they’d like to do for her son: get him four VIP passes’ entrance to their con. They even made a video each for Seamus to personally invite him to the con and the lad was quite pleased, as seen in the reaction video Winter took.

Not only will Seamus get the four VIP passes — which allow bearers to get ahead in the lines to meet celebrity guests and attend all three days — but the con owners arranged a few other surprises. An exclusive tour around the Bangor Mall where the con takes place, the chance to meet with some vendors which plan to give him surprise items, and meet and greets with some of the celebrity guests!

“I’m actually very excited for comic con! I went there last year and it was, like, literally the best!” said Seamus in an interview with Geek News Now on April 13th. “I think they’re really cool and they’re a good way so that, you know, people can interact with celebrities that they like, they can dress up as their favorite characters, and they can do a lot of cool stuff!”

One hopes Seamus will make new D&D gaming connections at this year’s Bangor Comic & Toy Con! If anyone’s running a game at the con’s gaming tables, Seamus would love to participate. His love of D&D is akin to love for the “choose your own adventure” styles of books: all the different possibilities and endings. Seamus shared his positive outlook that D&D adventures can last forever and you can still have fun “even when you’re 90 years old!”

Besides comic cons and D&D, Seamus loves horror movies! Whether they’re depicted in film, toys, games, Funko Pops, and more, Seamus digs them. He’s excited to hopefully meet the Friday the 13th saga’s Jason Voorhees himself — Kane Hodder; one of this year’s guests!

Seamus plans to take his friend Sloan, his mother Winter and her boyfriend Aaron to the Bangor Comic & Toy Con held April 22nd-24th in Bangor, ME! The owners of BC&TC can’t wait to meet this kid!

“He’s a great kid doing so much for his community he’s a mini version of us and we’re so proud of him.” said Hesketh.