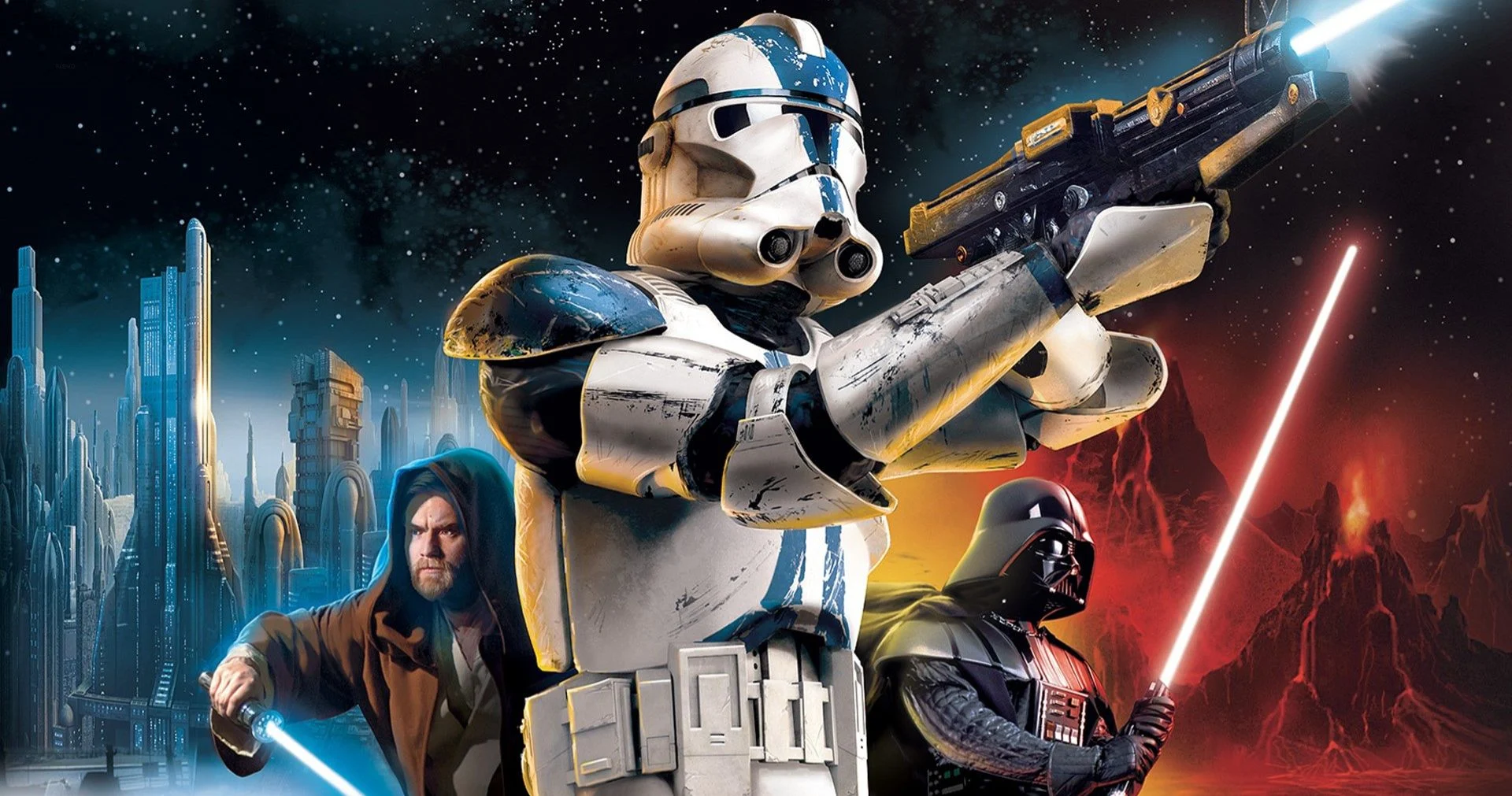 The original Playstation (PS1) and XBox era produced five amazing Star Wars video games! Each one of them was unique and worthy of replay time and time again. Nothing against current Star Wars video games — except the excess of DLC as opposed to complete games you buy only once… But let’s explore these top five games of the original PS1 and XBox to see what made them so special!

Villains available in the Heroes vs. Villains gameplay of Star Wars: Battlefront II (2005)! Picture credit to YouTube (via AdiGames channel)

Battlefront was good; Battlefront II was vastly superior! I’m talking the real deal Battlefront games; not the repeats from recent years. Here you fought within an army of heroes or villains set in the Clone Wars or Galactic Civil War eras… and it was so fun!

You captured enemy outposts and used tactics available to each type of trooper in your army, which was all well and good. But then in Battlefront II, you could have dogfights in space between ships and land within enemy ships in order to disable their systems! Oh, the battles were incredible! The graphics, dated but cool. The only thing which could make this game even more awesome was the inclusion of legendary heroes and villains if you racked up enough points mid-battle or played the hero and villain specific arena!

Your lead character whom you name (center), flanked by Canderous Ordo (left) and Bastila Shan (right) in Star Wars: Knights of the Old Republic (2003)! Picture credit to m.imdb.com

A true Star Wars classic in video game form. Navigating your lead character and a rag-tag band of heroes through the galaxy in search of star maps leading to a powerful weapon, you ultimately must choose the path of the Jedi or the Sith. It was a Star Wars “Choose Your Own Adventure” deal; and your actions had profound consequences good and bad alike.

This was pre-Skywalker Star Wars… So much new history to throw into the saga; the story of Revan who either saves or conquers the galaxy! It had a love story! It had plenty of action in an RPG-type situation! This game was never boring and merited replay.

The sequel to one of the hottest Star Wars games; a game which, sad to say, was not exactly complete by the time it released! While just as fun and intriguing as its predecessor — with a whole new story about a Jedi exile and a new rag-tag band of heroes — the most obvious thing about this game is that the whole ending chapter feels rushed and incomplete.

Beyond that, it is a worthy sequel! And this story was indeed awesome; though it ends suddenly and feels very down… It gets worse if you play the restored content mod through computer means!

In this game, you play as Jedi trainee Jaden Korr; one of the new apprentices to Luke Skywalker’s Jedi Academy on Yavin IV (remember, “Expanded Universe”). Over time, you grow your Jedi powers and walk further into a plot involving forces trying to resurrect the powerful ghost of Sith Lord Marca Ragnos. The big question: will you choose the light or the dark side of the force as your path?

I’ve never had a bad time playing this game. It’s action-packed, has a solid story, and it was awesome to be a part of the continuation for both Luke Skywalker’s story (sorta) and in rebuilding the Jedi Order! And in case you didn’t know… On that desert-terrain planet with “sandworm” beasts, you can distract them by firing laser blasts in the opposite direction of your intended destination as you scavenge for ship parts… Took me a few too many attempts before I figured that one out!

The Return of the Jedi (1983) duel… on Bespin? Gameplay of Star Wars: Masters of Teräs Käsi (1997)! Picture credit to YouTube (via RGLD Gamer channel)

An underdog among Star Wars games! Not exactly held in high regard by many fans, I think this game is a quiet work which deserves better appreciation. They said the graphics were bad, or the gameplay was choppy; I say it was fine and didn’t look too different from other tournament fighter games of the time such as “Tekken”! You had hand-to-hand combat, weapons, and special moves at your disposal — which you need, because Arden Lynn is a tricky fighter. Darth Vader… Even worse!

Is it tip-top? No; it really only has cool backgrounds and varying characters with unique fighting styles when it could have used some music cues from the Star Wars discography. Nevertheless, it was a fun little romp in Star Wars video gaming.

These five games will live on for many of us Star Wars fans; some in infamy, some for excellence, and at least one or two for nostalgia. When it comes to retro gaming and Star Wars, these are my go-to games! If you’ve never played them, go for it!

As May is Star Wars month here at GeekNewsNow it is only fitting to focus our thoughts on this 45-year old pop culture juggernaut....