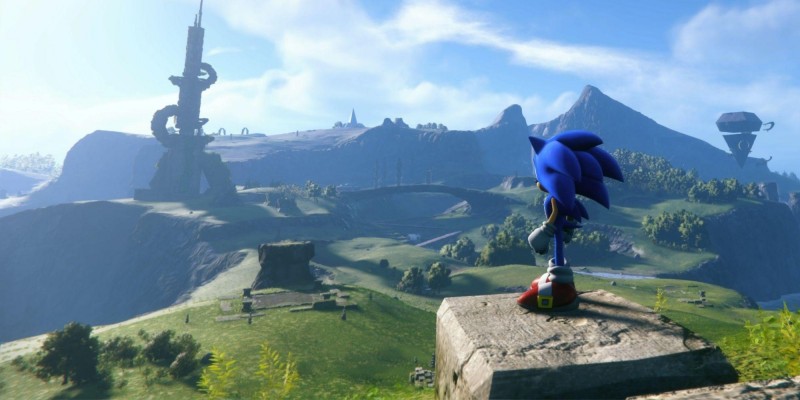 Sega unveiled exciting news on May 27th, 2021. Sonic Frontiers, their first open-world game, presents the little blue hedgehog in a brand new, open world adventure. The announcement trailer for the game launched on December 9th, just last year. However, not everything revealed itself quite yet. Therefore, we at Geek News Now did a little digging. And now, we’re proud to share with you all the latest info we gathered regarding Sonic The Hedgehog’s new adventure.

Sonic’s And The Starfall Islands:

Sega unveiled Frontiers following the 30th anniversary (June 23rd, 2021). The game was set for release shortly after. However, The company announced a one-year delay in order to ensure quality gameplay.

Frontiers will be produced by Takashi Iizuka and Sachiko Kawamura, who are known for their efforts in handling Sega productivity.

The music scores in Frontiers will be composed by Jun Senoue. Jun is the lead guitarist from Sega’s company band, Wave Master. During his time with the video game company, Jun worked on music for several Sonic games, including themes for Super Smash Bros. Series, and various Sonic works.

The Sonic Frontiers storyline will be handled by none other than Archie Comics Ian Flynn. Ian received work from Sega after sending in unsolicited proposals. Since then, he did numerous works for Sega, including IDW Sonic The Hedgehog, Archie Comics, and Mega Man.

Lastly, joining the Sonic Team will be Director Morio Kishimoto. Kishimoto is a long time, lead-game designer and director for titles such as Sonic and the Secret Rings, Sonic Colors, and Sonic Lost World.

With a valiant team behind the production of Sonic Frontiers, I’m looking forward to see how this game adds up in the end.

Sonic Frontiers will launch late this year. Sega will release the game across various platforms including Xbox, PlayStation and Switch. On the other hand, many followers and fans began comparing the game to other open-world platforms, such as Genshin Impact and Breath of the Wild. However, with the announcement trailer and team behind producing the upcoming open-world Sonic game, this could look to be an amazing adventure for our little blue friend.

That’s everything we have for Sonic Frontiers. Have an opinion on the upcoming platform? Be sure to leave a comment down below. We’d love to hear from you. Also, be sure to check out our Facebook page, as we always keep our viewers up-to-date on the latest info on the latest happenings! As always, Stay Geeky!