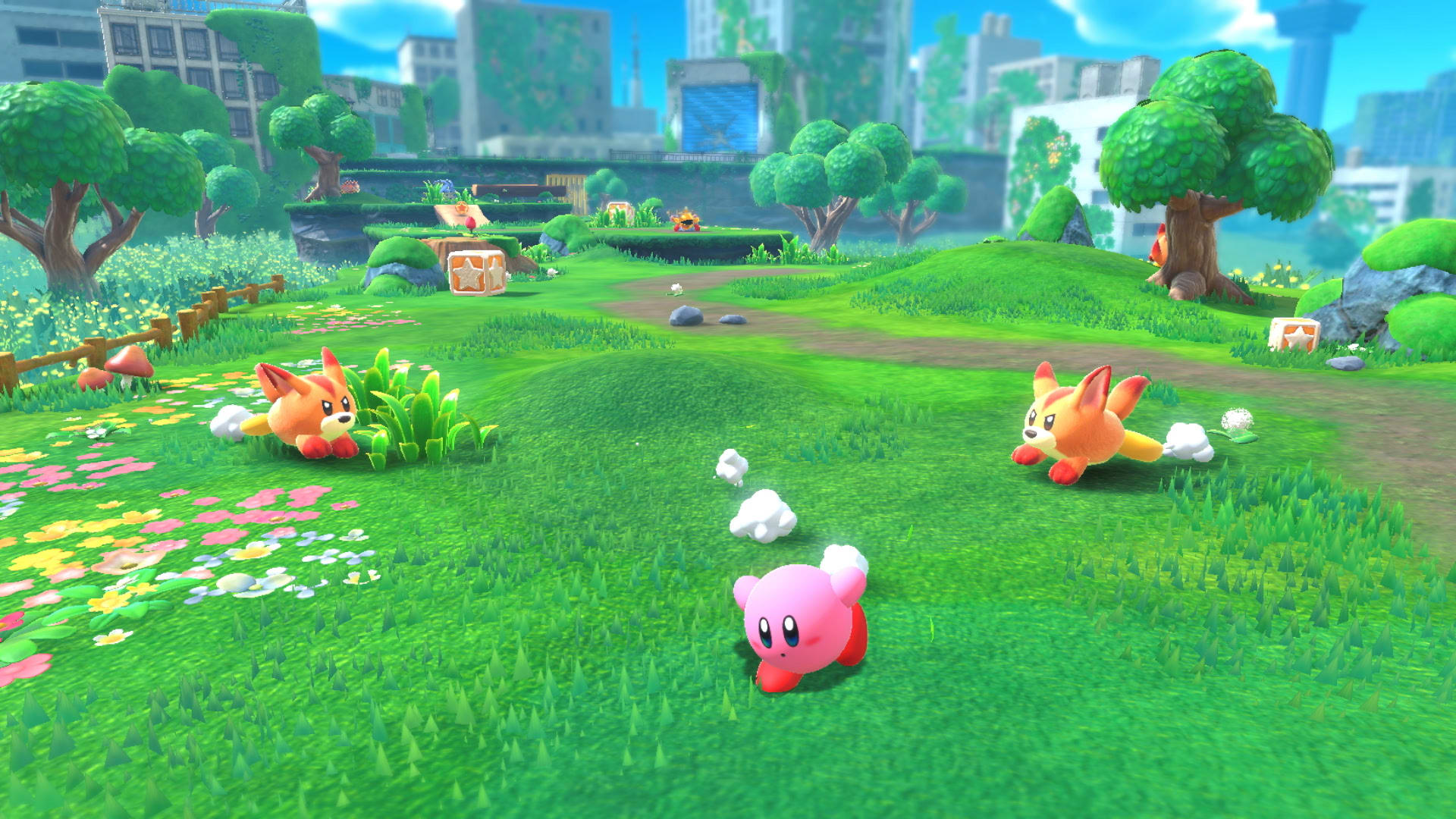 In the wake of gritty games such as Elden Ring and Horizon Forbidden West it is nice to play something cozy and cute like Kirby And The Forgotten Land. Forgotten Land is the 17th entry in the mainline Kirby series and the first mainline game to go fully 3D. The transition to full 3D is a strong choice that does a lot to benefit the overall package. The Kirby games have never been known for their difficulty, and this one is no different. Rather they are known for their charming art style, experimentation with powers, short completion time, and easy-going platforming sections. I can say, confidently, this is my favorite Kirby game I have ever played! And it is only available on Nintendo Switch.

The game starts with our favorite pink and squishy hero being sucked into a portal in the sky, along with many other denizens of planet Popstar, into a new and strange world. This appropriately named “New World” is full of abandoned ruins such as theme parks, factories, and abandoned cities ruled by a group known as the “Beast Pack”. It’s up to Kirby to find out what is going on, rescue the kidnapped Waddle Dees, and figure out how to return home.

a shopping mall with some environmental hazards is just one of the locations that Kirby will visit in the game.

This is the best Kirby has ever looked! The environments are so detailed (compared to past Kirby titles) that it truly feels like a fully realized take on what 3D Kirby should feel like. When the game actually begins we find Kirby on a strange beach and there is a seamless transition from cutscene to actual gameplay. It took me a couple of seconds to realize I finally had control of him.

Past Kirby games had floating platforms and ambiguous level layouts for the most part. Forgotten Land has a vast array of unique and pleasantly designed levels centered around different themes (The theme park world is a personal favorite of mine). Which makes sense since this is one of the few Kirby games that doesn’t take place on Planet Popstar.  There is a world that is an abandoned vacation resort that has been reclaimed by the desert around it. Dried up in-ground pools, abandoned motels, and sand-covered shipping containers help ground the feeling that this is a truly forgotten place.

Rescuing Waddle Dees, the main unit of game progression, also nets you some rewards. In the game’s main hub area, Waddle Dee Town, the rescued minions build facilities for Kirby to use including little minigames. You can heal up in between levels here, swap out powers for Kirby, and eventually fight optional bosses in the arena. The town is also where you will get to utilize one of Kirby’s newest additions, powered-up abilities. For example Kirby’s base bomb ability can be powered-up to chain bombs and finally homing chain bombs. Mouthful mode is also a welcome addition as well. Kirby can inhale traffic cones, vending machines, and even industrial pipes to change his shape and interact with the environment in meaningful ways!

Just This One Little Thing…

My only gripe with the game is relatively minor. The main issue is that the story only gets fleshed out in the last 30 minutes of the game. After a few final back-to-back boss battles we are treated to the full explanation behind the events of the game and it feels a bit rushed and half-baked. The story is a bit darker than what I expected (although Kirby is no stranger to dark story-telling) and it sort of clashes with the overall atmosphere of the game.

I wished the story unraveled slowly and consistently over time. I also would like the environmental story to be a bit more in-depth. The game does explain what happened to the game world, but not in a satisfying manner. I know we don’t play Kirby games for rich story-telling. I just think for Kirby’s 30th anniversary game they could have gave a better story treatment.

Ultimately this is one of the best Kirby games we have received in a long time and my new favorite. The new abilities, post-game content, minigames, and 3D worlds make it the best content-packed entry in the series. I didn’t even mention how tight the controls are and how well Kirby handles in full 3D! Kirby’s mobility and versatility is on full display here and it is solid! The ambitious story is a slight imperfection on an otherwise wonderful entry in a beloved Nintendo staple. The game took me about 11 or so hours to complete. But I think less is more in this case as it keeps it from getting stale. For that reason Kirby and the Forgotten Land is a solid 9/10!

In this article:Kirby, Kirby and the Forgotten land, Nintendo, Switch