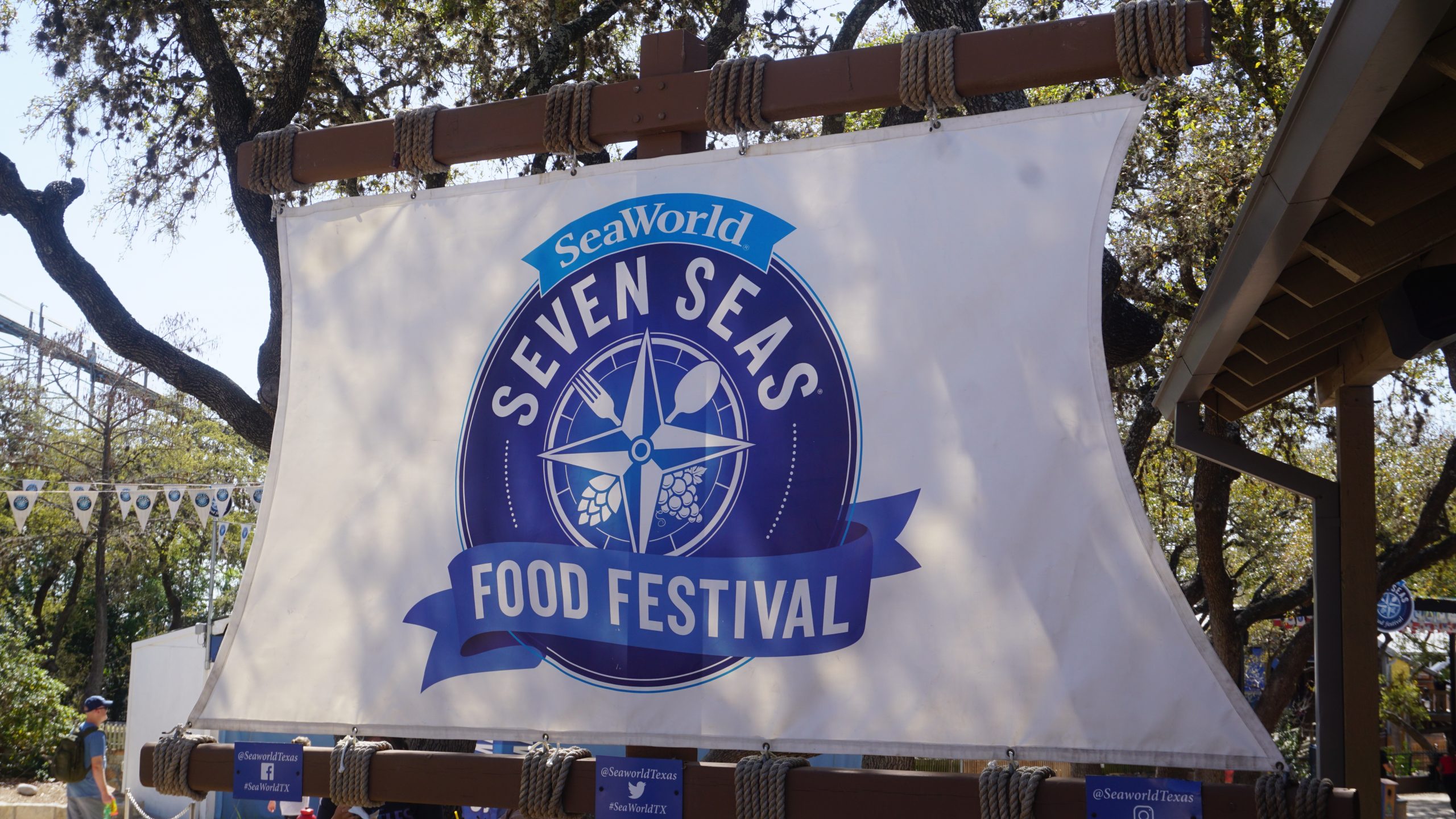 SeaWorld San Antonio hopes you have a big appetite.

March saw the return of the Seven Seas Food Festival that offered up a whopping 100 food and drink options from countries across the globe. This event will go on for an astounding 10 weeks, ending May 30th, and promises over 20 new menu items from the previous year.

My wife and I attended this event on opening weekend and we were delighted by some munchables, but not so much by others. This is “part one” of my review as we fully intend on going back to try additional foodies. After all, with 18 punches on our lanyard to burn, we couldn’t be expected to go through them all at one go. PLEASE NOTE I was not paid or given any special treatment by SeaWorld to write up this review. I’m just your Average Joe who skipped lunch on purpose in anticipation of what I would find in the park.

One of the many unique photo stops throughout the park.

We purchased two lanyards of 15 samples each and promised to try different menu items to really broaden our opinions. However, the first slip up at the park happened right when we got to the SeaWorld Seven Seas registration desk. As park pass members, we were supposed to get a bonus of three additional punches on our lanyard for a total of 18, not 15. The employee handed us the standard 15 punch lanyard and when we pointed out the error, he tried to transfer our lanyards.

My transfer worked. My wife? Not so much.

“But don’t worry,” we were told. “Just explain why the bar code won’t work. They should still punch the lanyard which means you can’t use that punch again. It’ll work out.”

Uh huh. Well that did work, but it also meant that we had to tell our story at every single stop and convince everyone that we weren’t trying to rip them off with a fake lanyard. It got a little tiresome after a while.

The weather was terrific and the park itself really looked good. It has been pretty dry down in South Texas but the landscaping was fantastic and the grounds well maintained. While a bit crowded, we never felt that SeaWorld was crammed with people. It was a nice walk on a sunny day. In addition to the food, each “nation” had their own unique “photo opportunity” with backdrops available to take pictures with.

The “Great White” is one of the many coasters throughout the park.

One of the more fascinating parts to this was that the lanyards themselves allowed for 18 punches. Why is that fascinating? Because there’s nothing stopping me from getting 18 small, but alcoholic, drinks. In the past, the lanyards would have separate food and drink punches to prevent you from getting pretty tipsy before riding SeaWorld’s epic roller-coasters, but not this year. In theory, I could have gotten Lion Lemonades, Jager Bombs, Honey Bee Hurricanes, margaritas, sake, wine and whiskey flights until my liver cried “Uncle!”.

With that being said, let’s dive into the review and hand out some, highly anticipated and slap free, awards!

“Ooh La La” Award – France. Hands down, no question, not a doubt in our minds, both my wife and I agreed that the crepes at the station in France were the best. I picked up the banana and strawberry crepes while she had the caramel apple. Both were an absolute triumph in taste and authenticity.

The crepes in France were outstanding!

“They’re the Same? I think?” Award – Jamaica. Two of the drinks we tried were the “Jamaican Me Crazy” (rum, orange juice, pineapple juice, and cranberry juice) and the “Caribbean Rum Runner” (rum, coconut rum, blackberry brandy, banana liqueur, orange and pineapple juice). Amazingly enough, these two tasted almost exactly the same. My wife and I traded sips back and forth several times and they were eerily similar, despite the ingredients listed above.

“Lookin’ For My Lost Shaker of Salt” Award – Mexico. The sopapillas were outstanding here. Not too doughy, not too crispy, and not drowning in honey either. The bonus was getting an extra margarita by mistake. My wife ordered one and, somehow, they passed me one as well without me ordering one and without a second glance. This won’t be the only time we got free food or drink due to mixups.

The sopapillas were well done.

“Bombs Away!” Award – Germany. Talk about a pick me up! While my wife had only the apple strudel with vanilla ice cream (which she said was passable, but didn’t compare to France), I snagged the beer braised bratwurst with caramelized onions. The chef, by the way, was terrific. Very engaging, fun to talk to, cracking jokes, he had a great time working. The bratwurst was passable as well, but for my drink I picked up a “Jager Bomb” which consisted of Jagermeister and Monster energy drink. That blitzed through my system pretty quick.

“Molto Caotico” Award – Italy. The low point of the SeaWorld trip, Italy was plagued with bland food, a poor system of execution, and the worst peach bellini I’ve ever had. While I could overlook the food (I was getting pretty stuffed by this point), the bellini was just appalling. As near as we could tell, there was no “fresh peach”, no peach schnapps, and was 99.9999% prosecco. That might be a conservative estimate on my part. What was odd was that at every other “nation” they had a very simple line system. Wait in line, approach an employee, make your order, get a receipt, hand the receipt to a cook, get your food, then go “om nom nom”.

But in Italy, once you made your order (and we told our electronic tale of woe again), you stood at a counter with other people. There wasn’t a designated receipt taker. Sometimes a chef took the receipt, sometimes the guy making the bellini did. Sometimes it was a random person just walking by. This meant that while several people patiently waited their turn, you could say “hey can you take this?” to an employee and jump in front of them. Yeah….that happened while I was there. No….it wasn’t me who did it. This chaos also produced a free meatball slider as my wife walked away with hers, but the chef handed me one as well, not realizing the error.

The food in Italy was…okay.

SeaWorld does put on a good show every year and my wife and I are no strangers to their various events including Seven Seas, Howl-O-Scream, and their Christmas Celebration. Despite the missteps in Italy I look forward to going back this weekend and writing about our visits to the Brazil, Hawaii, Japan, Korea, and oh yeah we’re soooo going back to France.

If you haven’t subscribed to our website, now is the time! Make sure to personalize your news so you get what you want and stay spam free!

In case you’ve been living under a rock, or you’re Down Under, it’s brutally hot this summer. Thankfully, the Aquatica Water Park at SeaWorld...