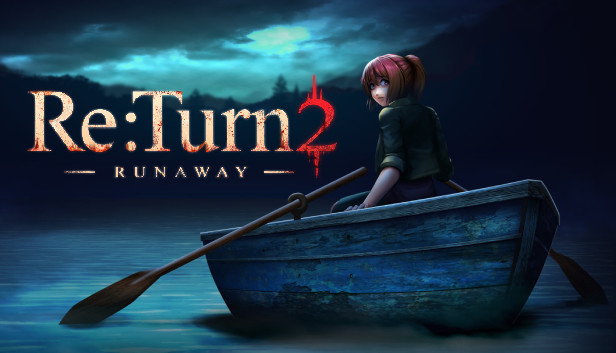 Following in the large footsteps of horror pioneers such as Clocktower and Haunting Grounds, Re:Turn 2-Runaway is mostly about sheer survival and interacting with everything in everyway. Developed and published by Red Ego games, Re:Turn 2-Runaway is a direct sequel to Re:Turn -One Way Trip, the developers’ first game. I was kindly provided a steam key for this review by the publisher. I played it on PC but the game is available on Switch and Xbox Series S/X. Before we get into it allow me to preface with this, I never played the first game so I came in blind. Just keep that in mind.

The game doesn’t use cheap jump scares but it can still be a bit unnerving.

Re:Turn 2-Runaway is essentially a 2D side-scrolling pixel art survival horror game that pits the player’s character, Saki, against supernatural elements to save her fiancé Sen. The game does an ok job of catching you up to speed on the plot, but at times it does feel like you are missing some semblance of context for certain bits of dialogue.

The main antagonist isn’t fleshed out very well and the logic behind some of the items and how they are supposed to work is a bit lacking. Also some of the items found hidden behind the UV flashlight lens were pretty hard to find as they barely shined at all, resulting in a lot of padding and time spent wandering around aimlessly.

The core gameplay loop breaks down to this: Saki wanders from place to place looking for the next item needed for story progression. That’s perhaps a rather reductive way of putting it, but it’s pretty true. You can try to figure out what item goes where, but after a certain point you’ll just start trying to use every item you have on every unique piece of environment. That’s largely how these side-scrolling adventure games play out.

Some of the environments in the game are pretty grim.

On The Brighter Side…

That’s not to say the game doesn’t have some positive things going for it. The majority of the game takes place on train cars and a forest, so the side-scrolling nature of the game makes a lot of sense and definitely helps with immersion. All of the visual effects and 2D pixel art style look really great and I found the game to be pleasing to look at overall.

The game recommends playing with headphones and for good reason; the game’s strongest attribute is it’s sound design. The sound effects and music are very well done and polished. I got literal goosebumps when I heard the rending and squishing of flesh at one point, it’s quite visceral. The voice-acting (except for one very particular character) is great and well-produced.

The combat aspect of the game is pretty simple. When a monster spots you you have to manage your stamina and flee to a hiding place and let it pass by as Saki has no weapons or real means of self-defense. It becomes a dangerous game of hide-and-seek. With vibration enabled you feel as the creatures get closer and eventually pass you. Failure to adequately get away results in an instant game over.

Lastly the game has a couple of different endings based on what choices you made near the climax. This does contribute to the overall replayability as the game is about 3-4 hours long.

While the game does have terrific audio and passable gameplay it’s hard to really recommend it for anything beyond that. The gameplay loop of using and finding items to interact with the environment is nice but ultimately nothing groundbreaking or deep. At times, especially early on, it can be frustrating to find that one thing you missed simply because it didn’t shine long enough under the UV light.

The frequent save points make the chase sequences feel inconsequential and provided low stakes. The plot is chilling at times but a bit nonsensical even when it tries to be serious. Fortunately the game’s short run time makes sure it doesn’t wear out it’s welcome and can be completed in a single evening. Overall I give the game a 5.8/10.

For more reviews, opinions, news, and other geeky pieces be sure to subscribe to GeekNewsNow!

In this article:Re:Turn 2, Red Ego, Steam