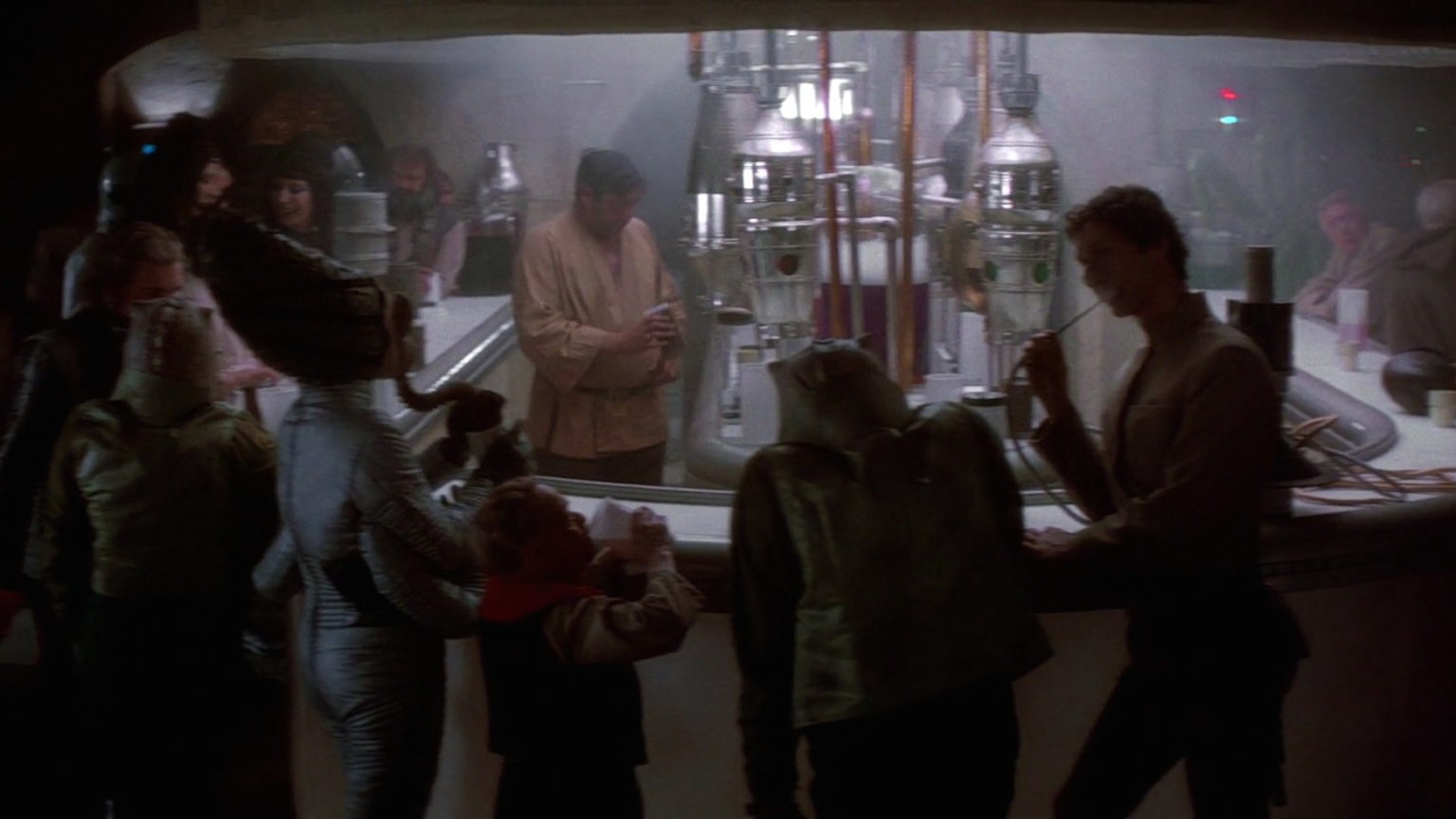 As the Star Wars Obi-Wan Kenobi series comes ever closer to coming out people are getting excited in their own ways. The trailer coming out had many people interested or upset with the look of certain elements, or intrigued with the plot. I’m not one of those people. The shot that got me most excited was Kenobi watching Luke from a distance on Tatooine. However, because my brain thinks in weird ways. My mind got caught up on on dairy drinks.

For some reason the idea of blue milk really made child-me believe the Star Wars galaxy was completely alien. Whenever fantasy or sci-fi every time fiction invents food & drink, the first thing I want to do is try it. I’m not the only one as many different recipes are available online. The actual recipe on set appeared to be mostly additives and food colouring that made you retch though. We will never truly know, as reality is it comes from a bantha, and there aren’t many of them walking around.

But what about other Star Wars drinks?

Star Wars’s galaxy is so big writers have either thought about details already, or are going to think about it soon. There are plenty of patrons in the cantina, and we know what each species is by name. However, we probably also know what they were drinking. Across the decades there’s been cookbooks, side-gags or just random notes that have informed us about a society long dead and miles away. There’s even laws about operating machinery after drinking on Tatooine. When you’re dealing with something as fantastical as Star Wars you can make whatever drink you want. Some are just “tastes like X drink you know” but some have a bit more effort put in. I live off of trivia like this so here’s some bits I happen to love.

Have to destress somehow

The most popular drinks referenced in Star Wars media seems to be those enjoyed by scoundrels. The thieves and low-lifes that fill the many alien bars and speakeasys. Because of the weird way that Star Wars has two continuities our favourite criminal Han Solo has two faves. In the old Legends continuity Han was a beer drinker, specifically Alderaanian ale. In the new canon his taste has gone a little bit more up market. According to the canon comics Han and Chewie love to kick back and drink some Corellian wine. This brings to mind lovely evenings where the two best friends share a bottle under the stars after a job done. Of course we have no idea what either of these taste like. However, given what happens to Alderaan it’s safe to say Canon Han will be able to keep a better supply.

Another underworld drink I think is fun to think about is the Rhodian Splice. Another Solo fave this one comes with added danger. To most species if it isn’t mixed in exactly the right way, it’s essentially drinking poison. This one does have a recipe we can make, all though it’s nowhere close to the original. Most Publishers and PR firms take issue with suggesting the public drink toxic ingredients. This comes from the Black Spire Outpost Cookbook. The recipe of equal parts coffee liqueur, cream liqueur and bourbon is nice… But it’s no where near as fun as a drink for the brave and the desperate, as likely to kill you as kill your thirst.

The other end of Star Wars drinking is the far more expensive, exclusive brews. These are the kind you see in fancy Coruscant apartments in shiny glass bottles. With trade blockades and laws being a constant of the galaxy, these often find their way into unscrupulous hands. One that immediately pops to mind is Merenzane Gold, mainly because of it’s cool name. This is that one rare bottle of liquor someone’s grandad got as a gift but very rarely opens. It’s been used as shorthand in the franchise, if someone’s drinking liquid gold, they’re probably loaded. It’s so well known that there are tales of dodgy bartenders selling a cheap imitation as a way to make their business classier.

There’s also Whyren’s reserve, something with a different shorthand. This is a drink so exclusive that if someone where to have a bottle knocking around, it probably meant they were into some darker dealings. it’s one of the few drinks in Star Wars that we have a description for, at least in Legends. There it’s described as “crisp and woody” which puts it in a class similar to something like a vodka or gin. The price is no joke either, when thinking about it Han Solo (Who keeps appearing when talking about booze) says one case is more expensive than the entire Millenium Falcon. Also it’s a favourite of the best wingman in sci-fi Wedge Antilles. That’s one of the few characters to fight a Death Star twice and win, I’d take his word on good taste.

And Here Ends a Taster Session of Star Wars Trivia

Star Wars is a franchise so dense that there’s a near infinite amount of little details. The idea that if you dig deep enough there’s an entire drinks culture is insane. This doesn’t even cover times when writers use drinks to make fun references. For instance there’s “Old Janx Spirit” from Hitchhikers Guide to the Galaxy or the “Red Dwarf”from… Red Dwarf (They’re not all subtle). This is only a part of a wider piece of small Star Wars lore. While knowing any of this is probably only going to help on the most difficult of pop-quizzes, it does show how much care and love is put into even the tiny bits of this galaxy. To me that’s what makes Star Wars special. From milk on Tatooine being blue, to booze being more expensive than spaceships, it all adds to that lived in feel.

If you liked this dive into Star Wars drinks but are thirsty for more far far away info, here’s our latest news drop on the upcoming LEGO Star Wars: The Skywalker Saga.