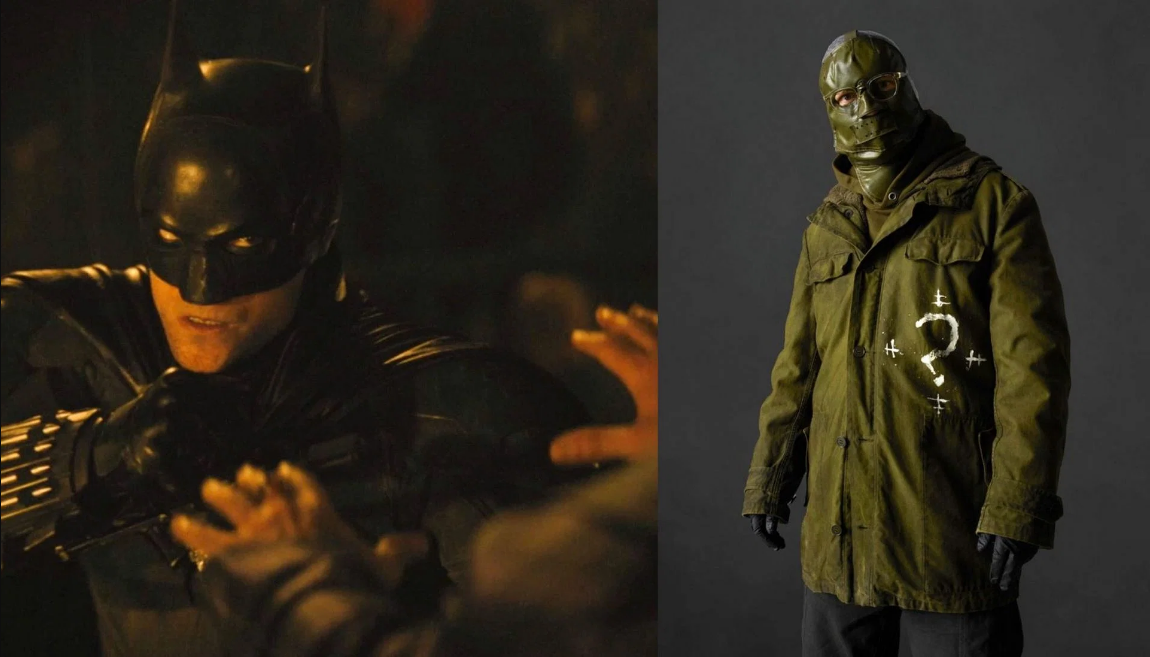 The Batman (2022) has two major strengths: the suspenseful layers of the mystery for Batman to solve, and the villains. The rest is fine; it was never boring, but the beginning does drag a little. But as much as one might want the satisfaction of an average “Bang-bang! Ka-pow!” action blockbuster usually seen in summer, this isn’t that kind of movie. It’s a slow ride at nearly three hours long, but it’s never without suspense or satisfying Batman villains.

What isn’t a strength: the lack of lighting. I cannot emphasize this enough in my deepest declaration to Warner Bros.’ DC Comics films of late… Learn to use lighting! That was the major drawback to this movie: you can hardly see anything that’s happening. I get it! It’s a dark city with dark elements; that doesn’t mean you make it so hard for your audience to make out what’s going on.

Bruce Wayne considers the clues left by The Riddler! Picture credit to theringer.com

Speaking of what’s going on within the movie, there’s a big conspiracy which The Riddler (Paul Dano) knows of that connects a significant amount of the corrupt forces in Gotham; all hiding behind not only trusted public figures and crime bosses like Carmine Falcone, but within the city’s renewal fund established by former mayoral candidate Thomas Wayne.

No, Thomas Wayne is not corrupt… This was something which most of us probably expected after a trailer showed Bruce saying to Alfred how the latter lied to him about his father; also given the “sins of my father” written in Bruce’s clues circle also seen in a trailer. Thomas’ secret: he was a good man who made a bad choice. He asked Falcone to lean on a reporter who wanted to expose Wayne’s wife Martha’s history with mental illness; only Falcone had the reporter killed so he could get Thomas in his pocket owing him a considerable debt. Alfred thankfully clears it up for Bruce that Thomas, upon the reporter’s death, was going to go to the police and tell them everything… and then Thomas and Martha were killed.

But the pace leading up to this is suspenseful. The slow ride is worth it in the payoff of both the truth of Thomas Wayne and of the corrupt conspiracy behind who runs Gotham City. You’re constantly wondering how deep the rabbit hole goes each time another layer of the conspiracy is revealed. And we get one heck of a villain leading Batman (and us) down the path of clues.

The Riddler (Paul Dano) sets the scene of his crime! Picture credit to denofgeek.com

As said, one of the big strengths of The Batman is the villains; specifically The Riddler (aka Edward Nashton)… He is so unsettling; before and after you finally see his face! Whether it’s how he talks, makes noise like a caged animal, or even in the facial expressions he gives it is all very unsettling. One wants him be a simple supervillain Batman can confidently get the upper hand on; but he truly is focused insanity playing a game with our caped crusader.

“Paul Dano has always been a great actor but seeing him really give his all to a villainous role was wonderful to watch.” said Batman fan Cam Fischer. “It was menacing, subdued, and hammy all at the same time. He was given just the right amount of screentime for his big reveal to really hit hard.”

Did I say The Riddler was the only villain who helped set the uneasy, eerie tone of focused madness? No…

Actor Barry Keoghan (left) makes a cameo in The Batman as none other than The Joker (right)! Picture credit to fictionhorizon.com

While I’d normally call a movie for blatant sequel-baiting, this one was not without merit as it showed someone else as insane as Riddler stashed away in the recesses of Arkham: a certain clown who feels Riddler’s approach is a nearly-perfect one and undoubtedly, after making friends with the puzzler, is on the road to causing Batman trouble in a future tale set in this film universe. It was pretty cool seeing the two villains interact with matching levels of madness and mutual “love” for Batman.

Batman navigates his way to getting the info he wants! Picture credit to vervetimes.com

The Batman is not your average Batman movie; while grounded in reality a la Christopher Nolan’s The Dark Knight trilogy, The Batman is not high octane action with explosive music backing it up. It’s a slow ride from start to end, but most of the contributing factors make it interesting. We see a Batman who is still figuring how to approach his path; especially what he hopes to inspire as he tries to save Gotham: hope and justice, or vengeance. It’s worth the sit-through and I recommend it to all Batman fans!

What did you think of The Batman? Comment below! Check out this month’s Geek News Now free giveaway contest for awesome Batman-related items! Also, subscribe to Geek News Now and give it a like on its Facebook page!