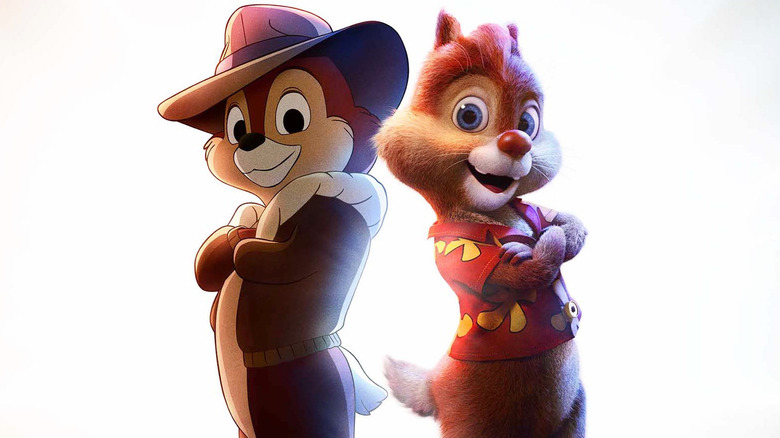 Chip and Dale: Rescue Rangers is making its way to Disney+ streaming services. However, it’s not the Saturday morning cartoon we all grew up with. This time, our favorite chipmunk duo will be taking on a more live-action approach. Today, we’ll be taking an inside look into the upcoming Rescue Rangers film, and what’s in store.

Chip And Dale; Reunion of the Rangers:

Set 30 years after the success of the Rescue Rangers cartoon, the two brothers have long since made lives for themselves. While Chip works as an insurance salesman, Dale works the convention circuit in order to relive the glory days. However, things take an interesting turn when one of their old colleagues goes missing. Whisked away by the call to adventure, the two brothers must reunite and work together to save the day.

The trailer for the film, which can be viewed here, dropped on February 15th by Walt Disney Studios.

With the film only a couple of months away, it should come to no surprise that a casting is in order. Voice talents include John Mulaney as Chip, and Andy Samberg as Dale. Mulaney’s career centered mostly around stand-up comedy. Although, he did perform his role as Spider-Ham in Spiderman: Into the Spiderverse (2018) exceedingly well.

Andy Samberg, on the other hand, had a more extensive voice acting career. Samberg voice acted for films for the Hotel Transylvania (2012) film series as Johnny, and Junior in the animated film Storks (2016). Samberg also has a main role as Jake Peralta in Brooklyn Nine-Nine (2013-2021).

In addition to Samberg and Mulaney, Tress MacNeille will also be joining the crew. Although it hadn’t been specified who she will be starring as, MacNeille was the original voice of both Gadget Hackwrench and Chip from the original series. She had also shared her voice talents as Daisy Duck (Ducktales 2017), and Dot Warner (Animaniacs 1993-onward).

And, lastly, Corey Burton. Burton will be reprising his role as Zipper the House Fly from the original Chip and Dale series. Conducting a background search on Burton revealed a prior role as Cad Bane from both Star Wars: The Clone Wars (2008 – S2 Episodes 1-3), and The Book of Boba Fett (2022 – Episodes 6-7).

Thoughts on Chip and Dale;

With so many voice talents joining the film, I for one am definitely expecting to see some great things. Considering Chip and Dale dropped the high-pitched voices in this adaptation, I would consider this a smart move on the studio’s part. Since similar films such as Alvin and The Chipmunks (2007) existed, I can see why this had to be done, in order to avoid comparing the two.

Chip and Dale: Rescue Rangers (2022) airs on Disney+ services May 20th. If you would to share your thoughts on the upcoming adaptation, be sure to leave a comment down below. We’d love to hear from you! Also, be sure to stop on by our Facebook Page to see more content from Geek News Now. As always Stay Geeky!