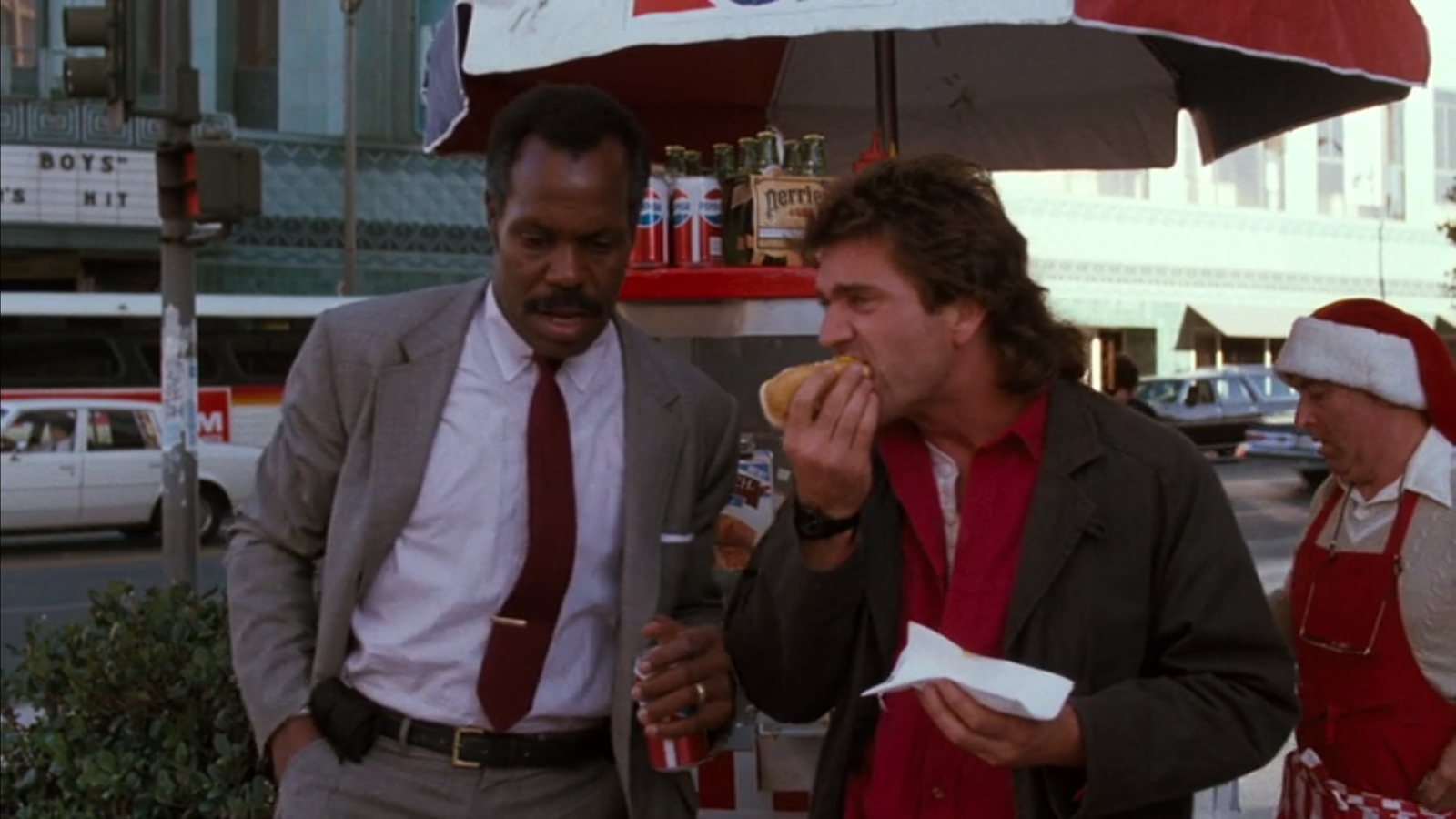 Lethal Weapon (1987), much like Die Hard (1988), is a Christmas movie! An unorthodox Christmas movie, for sure; but Christmas in many forms is present. It’s not incidental to the story; it impacts a fair amount of the world within. In time for the 35th anniversary of Lethal Weapon, let’s explore how Christmas circulates within the film and sets much into motion!

I know, I know, “we’ve heard this before with Die Hard“… But just because either movie isn’t light-hearted fare with snow all around does not equal “you can’t call it a Christmas movie just ’cause someone says ‘Christmas’ once” as a legit point of argument.

First, consider the following statement from the movie’s script writer Shane Black — who often set his movies at Christmas-time. In a piece written by Den of Geek, Black says: “At Christmas, lonely people are lonelier, seeing friends and families go by. People take reckoning, [they take] stock of where their lives are at Christmas.”

Riggs yearns to be reunited with his deceased wife! Picture credit to bamfstyle.com

This idea of Christmas highlighting these very things becomes all-too-obvious when we meet Martin Riggs (Mel Gibson). Riggs is a police sergeant who, after the death of his wife a few years prior, lives a very lonely life. He suffers daily, slipping into fits of rage or deep depression to the point of attempted suicides. He feels life is miserable but can’t seem to make it change for the better or just plain cap it off for himself.

When fellow sergeant Roger Murtaugh (Danny Glover) enters his life once they’ve been partnered, Riggs gets a glimpse into something better. Riggs gets to know Murtaugh and the latter man’s family; seeing them happily interacting. Christmas highlights Riggs’ loneliness, but also inspires him to see and appreciate what his partner has. By the end of the movie, Riggs becomes a sort of member of the Murtaugh family in time for Christmas dinner.

From there, the fare is very action/comedy buddy-buddy cop stuff. Riggs and Murtaugh uncover an ex military general’s plot to bring in heroin and set out to take him down; especially when the man has Murtaugh’s daughter kidnapped. Riggs proves his toughness in a one-on-one brawl with a mercenary who feels no pain. Murtaugh laments his getting too old for this stuff. And all is wrapped up in a neat little bow by the end.

Yet there is more to this seemingly simple action flick which makes it a Christmas movie.

Riggs holds up the bullet he intends to someday use on himself! Picture credit to screenrant.com

As perfectly stated by writer Erin Keane in her piece for Salon indicating that Lethal Weapon is indeed such a movie: “the power of the Christmas story lies in its message of hope for renewal, which conveniently coincides in the Northern Hemisphere with the darkest days of the year.”

Keane also states, and I happen to agree, that another Christmas movie features a suicidal character and didn’t start out as a traditional Christmas movie: The character, George Bailey… The movie, It’s a Wonderful Life (1946)! And yet ultimately it tells a tale of one man’s renewal during Christmas-time and has been hailed as a Christmas classic since it began running yearly on TV.

A film version of “A Christmas Carol” plays in the background as someone reads the note left on Murtaugh’s Christmas tree! Picture credit to itsastampede.com

Or for that matter, consider the old classic tale of one man who carries a hardened heart being renewed by the spirit of Christmas in its many loving and giving forms just in time to celebrate… I’m speaking of course of Ebeneezer Scrooge in “A Christmas Carol”!

While Riggs will always have the characteristics of a grizzled tough guy his world is made warmer and alive again. This is thanks to his involvement with, and essentially welcome into, Murtaugh’s family.

Still not convinced? Well then consider the fact that traditional Christmas elements are littered throughout Lethal Weapon!

We’ve got a Santa Claus on the street during the jumper scene, Christmas trees here and there (let alone a whole scene which occurs in a tree lot), traditional decorations like lights and ornaments and wreaths, eggnog beside Murtaugh’s old friend Michael Hunsaker when the latter is killed, presents under the tree at Murtaugh’s house, Riggs watching a Looney Tunes parody of “A Christmas Carol” as he contemplates suicide, and caroling at the police station. Shoot, even the opening and ending of Lethal Weapon are done with Christmas songs!

Fight it all you like, but there are many out there who consider Lethal Weapon to be worthy of inclusion as a Christmas movie tale. While not traditional light-hearted stuff, it brings the same feeling of renewal after suffering some dismal grey that is highlighted at the holiday season. Watch Lethal Weapon again and consider the evidence!

Do you think Lethal Weapon is a Christmas movie? Comment below! Check out this month’s Geek News Now free giveaway contest for awesome Batman-related items! Also, subscribe to Geek News Now and give it a like on its Facebook page!