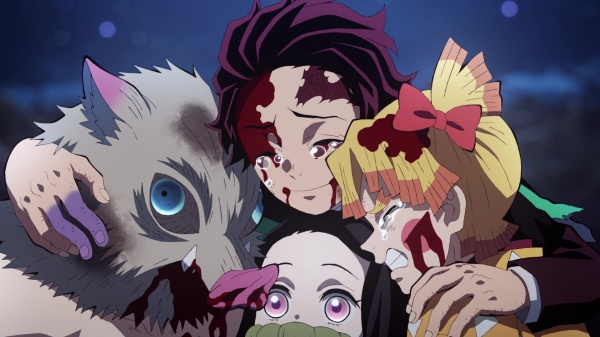 Demon Slayer: Entertainment District released their final, eleventh episode on February 13th. This is quite the surprise, considering the prior season held a whopping twenty-six episodes. Although the second season bore only 11, each episode constantly left us with a cliffhanger surrounding the final battle. Today, we’ll be taking an in-depth look at the battle against Daki, and the genius of the seven episode fight.

As a heads up, this article will contain spoilers for the finale of Season 2. The Entertainment District Arc is currently available to watch on Crunchyroll services, where available. Without further ado, let’s get started.

What had really popped things off for the start of the battle wasn’t Tanjiro’s determination. Instead, when it seemed like our favorite slayer was on the ropes, Nezuko jumped in last minute, flooring Daki instantly. Secondly, Nezuko unleashed what had appeared to be a long-awaited transformation. Accompanied with instant regeneration, rapid healing, and immense power, Nezuko became a powerhouse.

However, this came with a flaw. Once Nezuko unleashed this form, she began to spiral out of control. What made it worse had been when she smelled human blood, and almost attacked a civilian. Fortunately, Tanjiro stopped and subdued her with help of an old lullaby from their childhood. This had snapped Nezuko out of it, and reverted her to her prior form.

Had Tanjiro not jumped in when he did, she would’ve been next on the Demon Slayer Corps chopping block.

Gyutaro carrying Daki, the two protecting each other. Image from sportskeeda.com

Although Uzui managed to behead Daki, it came to everyone’s shock when Gyutaro, Daki’s older brother, formed from her neck. The poisonous demon quickly became a threat once he saw the situation his sister was in. Equipped with dual-sickles, Gyutaro had not only began administering poison to Uzui, but the Hashira’s true strength began to shine.

During their bought, Tanjiro and his friends fought Daki, but this proved futile to separate the siblings. Combining Daki’s sashes and Gyutaro’s slashes, the two proved to be absolutely formidable. It wasn’t until later on that the poison had really affected Uzui, with the reveal that he had lost both his left eye and hand during the battle against Gyutaro. On the other hand, one of Uzui’s wives, Hinatsuru, managed to strike the sickle demon with a single kunai.

This, coupled with Tanjiro’s efforts, gave our heroes the upper hand.

In one last stand, Tanjiro managed to hold off Gyutaro long enough for his fellow demon slayer, Uzui, to recover from the poison. Together, they took on the brother demon, while Inosuke and Zenitsu began to behead Daki. In one final push, all four demon slayers successfully beheaded the sibling demons. However, because Tanjiro surpassed his limitations, along with broken fingers and no stamina, the young Kamado found himself to the point of near black-out.

What was truly special about this scene had been the fact that Zenitsu used Thunder Breathing First Form: T&F God-Speed. In addition to Inosuke revealing that poison doesn’t effect him thanks to his wilderness life, and his ability to flex his organs, both swordsmen helped in simultaneously decapitating Daki and Gyutaro. Had this not been done in that manner, there would be no telling what would happen if they failed.

The Tale Of Two Demon Siblings:

Upon dying, both Daki and Gyutaro shared their resentment toward one another. However, before more harsh words were shared, Tanjiro intervened, expressing the two should just stop fighting. Once they had disintegrated, the two met in the bridge between heaven and hell. Here, it was revealed the two lived a horrid life in the District, with Daki (real name Emu) dying from being burned alive and left in a ditch to die.

Upon discovering the horrid act, her brother sought help, but grew tired and furious no one would aid them. Upon collapsing, an Upper Rank demon by the name of Doma approached the pair, giving them a chance at a new life by turning them into demons. After accepting, this began the story of their new life at the Entertainment District, and Daki managing to consume up to twelve Pillars (Hashira).

With the reveal of Doma, and the story drawing to a tearful ending, Demon Slayer: Entertainment District Arc finally came to a close. Uzui and Inosuke were both healed due to Nezuko using her Blood Art to burn the poison out of their systems. However, the Serpent Pillar Obanai Iguro arrived, stating his disappointment. After stating his retirement as a Hashira, Tengen felt that Tanjiro would one day become a Hashira, himself.

A question I asked myself once Season 2 had completed. However, if you’ve already read the Manga by now, I’m sure most of the series’ fans already know the answer. As far as I was able to tell, it would seem that the Infinity Castle will be the next stellar arc in the Demon Slayer series. The biggest clue would be Doma, considering he’s one of the major antagonists in a future arc.

However, this is just hypothetical. As for the series, I can’t wait to see what comes next for Tanjiro and his friends, as they continue their career as demon slayers. If you have an opinion on the season finale, and would like to make your guess as to what’s next, be sure to leave a comment down below. We’d love to hear from you. Also, be sure to check out our Facebook page, as we continue to keep our fellow geeks up to date with the latest information.

Digimon Adventure: 2020 finally comes to an end. The finale for the series aired on Crunchyroll, September 26th. Drawing its conclusion, it ended with...