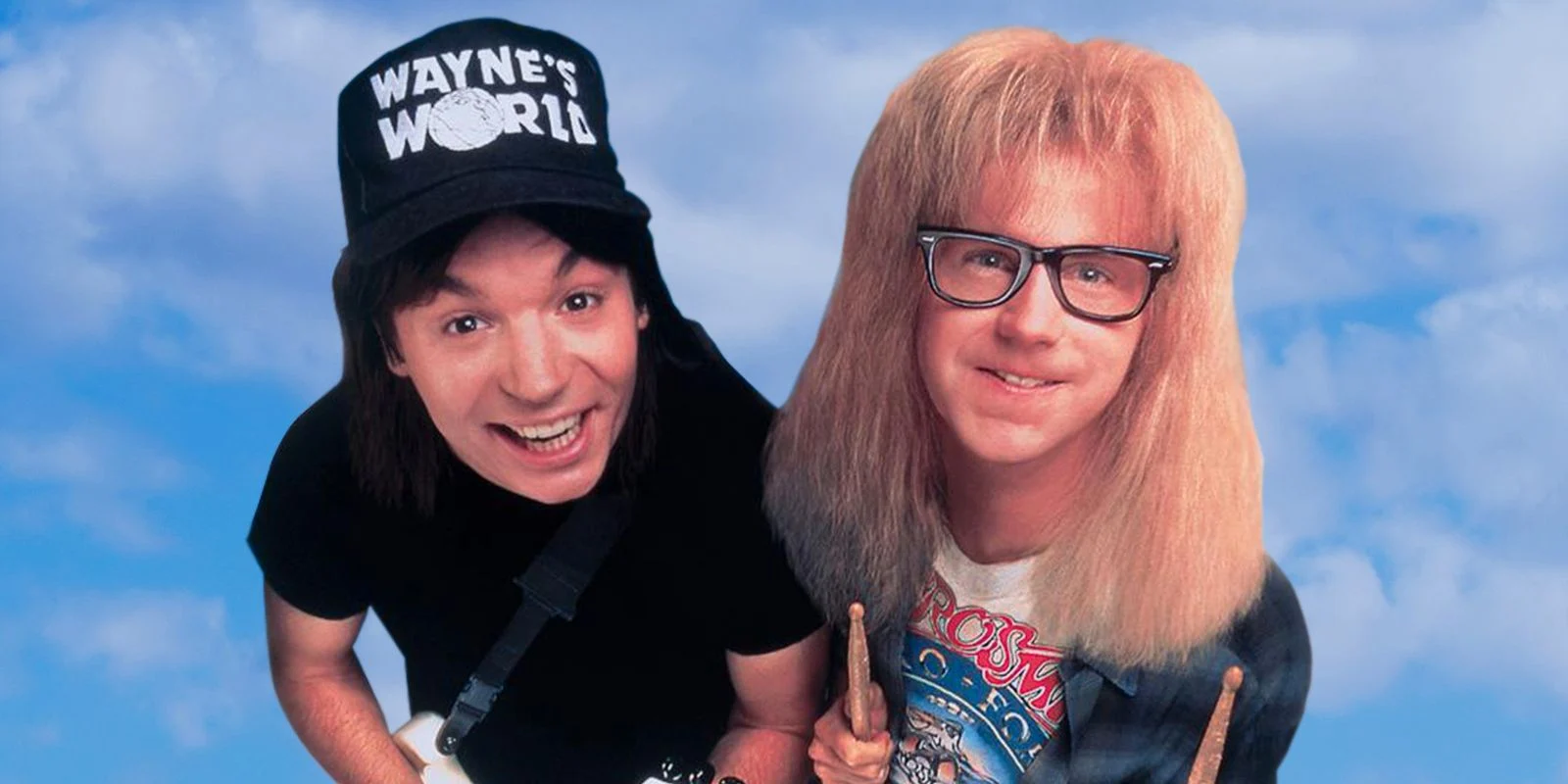 Wayne’s World is still excellent! It’s officially been thirty years since that comedic rocker duo — No, not Bill and Ted! Schyea! — Wayne Campbell (Mike Myers) and Garth Algar (Dana Carvey) graced movie theater screens on February 14th, 1992 in their first motion picture outing. We laughed at the jokes; we cried at the ending(s); we didn’t hurl, though. In celebration of the movie’s anniversary, check out this non-bogus collection of trivia from IMDb.com for all us fans of Wayne’s World!

Garth about to rock out! Picture credit to screenrant.com

That epic drum solo that Garth did at the musical instruments store… That was all totally Dana Carvey himself laying down his skills! I always figured that would be too difficult to mime.

The head-bangingly great song from British rock band Queen almost didn’t make it into Wayne’s World! In a potentially heinous move by the studio — Paramount Pictures — they planned to use a Guns N’ Roses song instead. But Mike Myers went all-out for “Bohemian Rhapsody”; even going so far as threatening to walk out of the production if the studio wouldn’t use it. In the end, we got a great scene which anyone would want to rock out to and it helped revive public interest in the song again!

Wayne (left) stands aghast as a clerk (right) informs him that the store doesn’t allow “Stairway to Heaven”! Picture credit to digitalmusicnews.com

Remember when Wayne was stopped from playing “Stairway to Heaven” in the instruments store? This may come from a point in the 1970s in which some British music shops totally banned (or even fined) patrons if they played the song on their instruments. Why? Because apparently at the time the song was played a lot for the public and these shop owners were sick of it.

4. From Ravi Shankar to Elvis Presley

In Wayne’s World, Wayne asks his girlfriend Cassandra “Will you still love me when I’m in my ‘hanging with Ravi Shankar’ phase?” He follows this asking if she’ll still love him when he’s in his “bloated, purple, dead on a toilet phase”… For those who wonder what these might mean: both are references to musicians.

“Hanging with Ravi Shankar” alludes to when The Beatles band member George Harrison spent time with Indian sitar musician Ravi Shankar; this lead to an Indian musical influence on future The Beatles albums like “Rubber Soul”. The “dead on a toilet phase” unfortunately refers to Elvis Presley who died of a heart attack while on the toilet. Basically, Wayne really counts on his becoming a big-time celeb with notable points in his story.

Mike Myers can be funny; but can he behave on set? Picture credit to spotern.com

Over the years, Mike Myers has earned something of a reputation for being quite difficult to work with when it comes to film productions. As mentioned before, he threatened the studio that he’d quit Wayne’s World if “Bohemian Rhapsody” wasn’t included; while this saved the scene, it was just one contributing fact of Myers’ difficulty. He often clashed with director Penelope Spheeris; even going so far as to block from returning to direct Wayne’s World 2 (1993). Another on-set story goes that one day Myers grabbed a bagel from the food table and found there was only butter — not margarine — and he got angry, flipped the table, then went to his trailer where he wouldn’t come out for hours.

What totally non over-dramatic attitude… NOT!

6. Saturday Night Live At the Movies

Wayne’s World isn’t the only movie based on something from original sketch comedy TV series Saturday Night Live (1975-present)… It’s actually the second; the first being The Blues Brothers (1980) starring John Belushi and Dan Aykroyd.

The three movie endings — unhappy, “Scooby Doo”, and mega-happy — were a satire of when some movies’ endings don’t work with test audiences and then the endings are reshot into something new; almost completely changing the point or lesson of the story.

Wayne and Garth; always up for a party! Picture credit to usatoday.com

Thirty years since its release and Wayne’s World still cracks us up with the antics of Wayne and Garth: Wayne’s cheeky and on-the-nose jabs at corporate sponsorships, Garth’s “Foxy Lady” dance, and both dudes navigating life with the urge to party. We at Geek News Now hope you found this celebration of Wayne’s World interesting — informative-yet-amusing — with an underlying geeky nostalgic conceit which shared the impression of the writer’s nostalgic attachment to the movie! For another thirty years: party on, Wayne and party on, Garth!

Any fond memories of Wayne’s World? Comment below! Check out the awesome Geek News Now giveaway for the Lego version of the Razor Crest from The Mandalorian (2019-present)! Also, subscribe to Geek News Now and give it a like on its Facebook page!