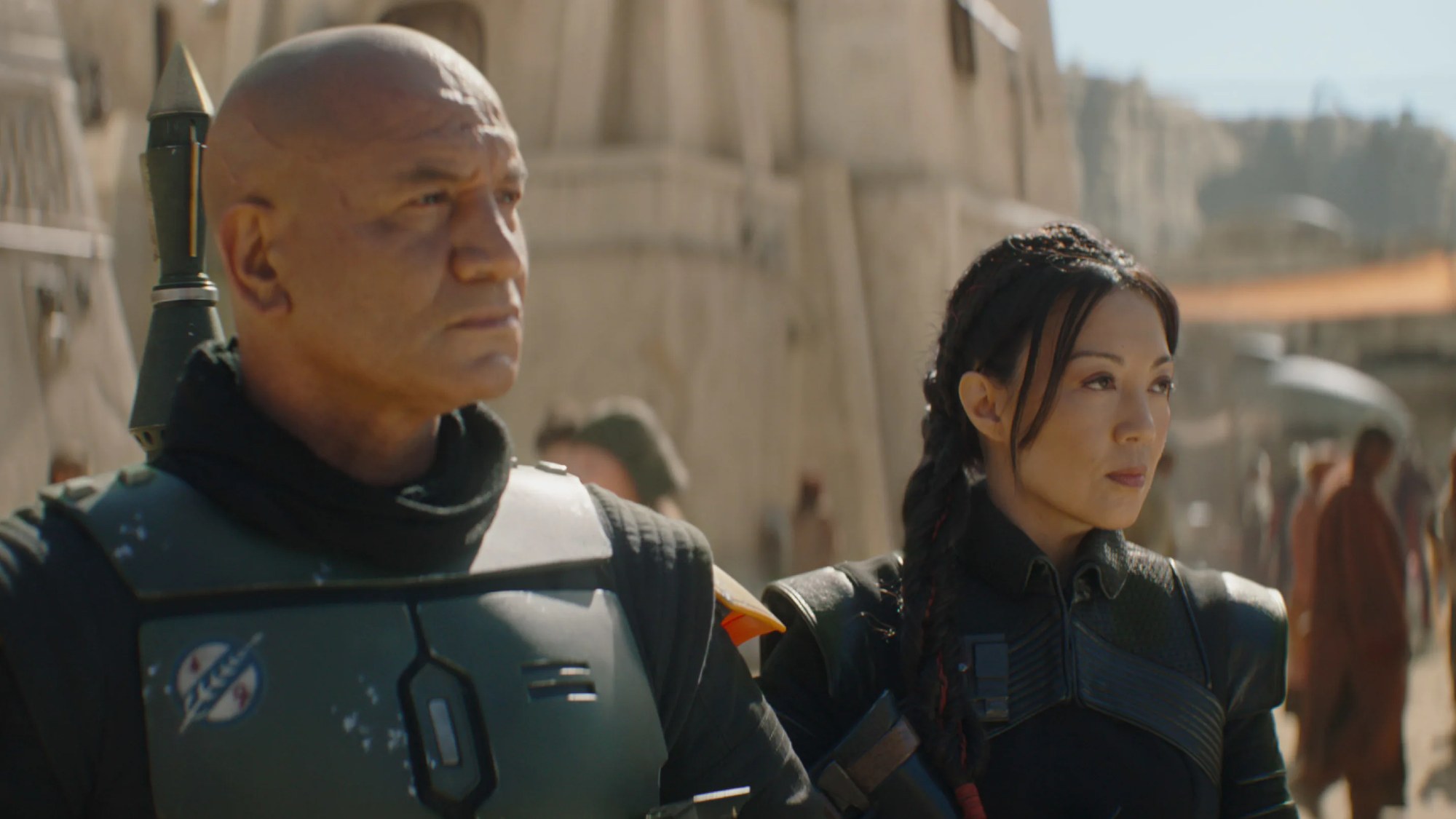 Boba Fett lives to fight another day, which was a safe bet overall. Let’s face it, Book Of Boba Fett has been a mixed bag sprinkled with nostalgia. It has an issue with what many call “small galaxy syndrome”, and many of us will feel conflicted about the finale. But we shall have that conversation another time. Let me just issue one stern warning before we proceed any further: SPOILERS ahead!

The miniseries finale sees Boba Fett join forces with the people of Freetown, Din Djarin, one ferocious rancor, and the rest of his motley crew of strays fighting off the Pyke Syndicate (along with Cad Bane). The people of Freetown show up at the episode’s climax to save the day. Boba Fett expresses his gratitude and laments the loss of Cobb Vanth. The rest of the finale plays out and our heroes successfully eliminate the Pyke Syndicate’s presence on Tatooine.

Boba Fett and Din Djarin team-up to save Tatooine.

As Boba and Fennec go for a victory stroll through the streets of Mos Espa Fennec mentions that Boba would do well to take another bath in the bacta tank. Boba states that the tank is currently in use and that’s the end of that. Immediately I think Boba is referring to Black Krrsantan, as he promised him a session on the tank earlier in the episode, but we see him stroll on up just a minute later. So who is in the tank? Well…

He Shot The Sheriff

That’s right, Timothy Olyphant’s Cobb Vanth is seen in the bacta tank in the mid-credits scene. But it seems like the bacta alone won’t be enough to pull him back to safety. As we see the camera pan up we get a quick shot of The Modifier (Thundercat) from Episode 4 looking ready to make some life-saving modifications for Cobb. This makes sense as we see Cobb take a rather nasty shoulder shot in Episode 6 from Cad Bane that looked lethal initially. However upon close examination, scene-by-scene, it is clear that no major organs were hit as seen below.

Vanth gets nicked in the shoulder area and makes the smart choice to not get up. Image from Fiction Horizon.

What I am curious about is what will Vanth’s role be going forward? Will he return to Freetown as the Marshal? Perhaps he will serve directly or indirectly under Boba? What modifications will he receive? Is he going to be some cyborg law keeper? The fact that they put a focus on him surviving makes me think he will return in The Mandalorian season 3 (or 4 depending on how you look at Book of Boba Fett). Vanth’s first appearance comes from the book Star Wars: Aftermath (Chuck Wendig), so we may possible see more of his adventures in the books. Honestly I was pretty bummed when I thought he died last week. Seeing him in the mid-credits sequence made me ecstatic about an otherwise so-so finale. Timothy Olyphant just oozes charm and charisma as Vanth and adds plenty of western flavor to these Disney Plus shows.

Are you glad Vanth is alive or do you feel Star Wars is playing it too safe by not committing to character deaths? Comment below.

Be sure to subscribe to GeekNewsNow. Also check out my Star Wars centric show called “My Star Wars Show” that I do with my cohost. We just put out our episode about the 2003 Clone Wars micro-series, check the episode out here. As always, stay geeky!