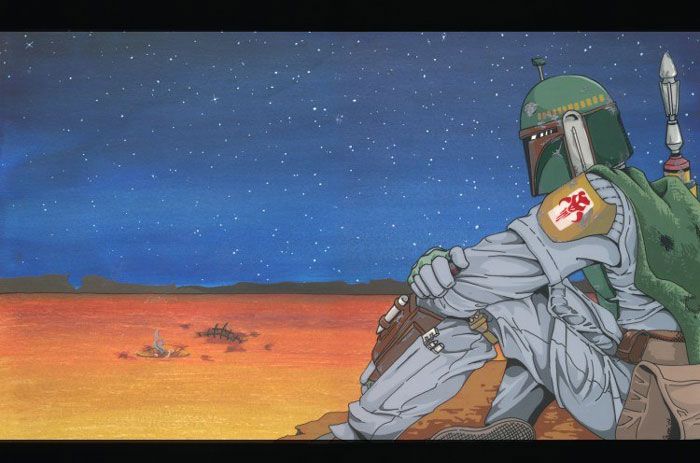 Like many Star Wars fans, I watched the latest episode of “Book of Boba Fett” earlier yesterday. I didn’t watch it as early as some fans, who popped open Disney+ the instant the app updated with episode five. Some of us need our coffee to kick in so we can function.

The episode was funny, well-written, had some good action, charming moments, plenty of the fabled Darksaber, and at the end of it all was one of the better episodes of The Mandalor…

Wait a minute. What did I just watch?

Up until now the “Book of Boba Fett” series had been just okay for me. Much like the narrative in an actual book (remember those?), it was slow, built some character, had a couple of twists and turns, and was gearing me up for the end in just three episodes. I have, so far, found it to be a bit plodding and dull. It’s not terrible by any means, but certainly has issues and is definitely no “Loki”…or “Hawkeye”…or “WandaVision”…or “The Mandalorian”. It’s not a terrible series by any stretch and I was interested to see how they would end the first season in a satisfying manner.

Boba Fett is a reactionary character, not one who has a grand plan and executes that plan with gusto. Instead, he mostly just waits for things to happen. That’s not the most exciting thing to watch. Star Wars fans crave action, explosions, and high-speed events. They don’t want to root for someone who spends a good deal of time chilling like a six pack in an ice chest.

But I’m a patient guy who believes in not judging a series by a few episodes.

Episode five changed my perspective. Spoilers ahead so you better feed the Disney Machine before reading any further! Ready?

So this episode of the “Book of Boba Fett” has exactly zero Boba Fett in it. I mean it, absolutely nothing about our Daimyo other than one reference at the tail end just before Bryce Dallas Howard’s name appears in the credits. That’s okay, I don’t mind following his wind-up toy, Fennec, around. Oh…she’s just barely in it? Okay what about following around the Mighty Morphin Tatooine Rangers and explore the seedy underbelly of the Tatooine Cyberpunk scene? Maybe they learn something sinister and we learn more about them as well? How about pushing some character development onto the fascinating wookiee Black Krrsantan?

A great time to learn more about….oh. I guess not.

No? Not even that?

Instead, we are treated to “The Mandalorian Season 2.1” in which we see what our beloved hero is up to as he travels without Grogu for the first time. He fights, he learns, he gets a sense of purpose again, we sew up a few unanswered questions from this show…I mean his show…and he spends a good deal of time fixing a ship that is 95% impractical for a bounty hunter.

Sure it’s fast, but in the pilot episode of “The Mandalorian” he had five or six bounties encased in carbonite on-board his Razor Crest, plus living quarters, a spot for Grogu, and a small armory. Where is he supposed to stash those bodies now? Or at least stash a pizza for those long trips across the galaxy? Is this the end of his bounty hunting days?

You might say that I’m nitpicking here and perhaps I am but by the end of the day there is one undeniable fact. Star Wars fans went nuts for an episode of the “Book of Boba Fett” that didn’t show the main character and barely even mentioned him.

I don’t mind crossovers, I don’t mind bringing in characters from other shows (Dave Filoni practically made that a common trope.), and I don’t mind references or subtle nods to other parts of the franchise. This episode made one thing absolutely clear to Lucasfilm leaders. To quote the great Selma Hayek:

“The Mandalorian is King, and you’re a schmuck!”

Okay she didn’t put it just that way, but you get the reference. Imagine having an episode of “FRIENDS” (yeah I’m getting nostalgic here) that followed around Jerry Seinfeld.  Instead of those crazy antics you’re used to seeing from characters you like, it’s just Jerry doing…well, nothing. He talks with Kramer, mutters “NEWMAN!” under his breath, before wandering down to a certain coffee shop 22 minutes into the episode where Phoebe sits down next to him and says “would you mind joining my friends and I? Rachel and Ross will be here soon.”

Then you see “Directed by Bryce Dallas Howard” and you’re wondering the same thing I am.

What did I just watch?

You’re more than welcome to drop a comment on this article or head over to our Facebook page and sound off there too!