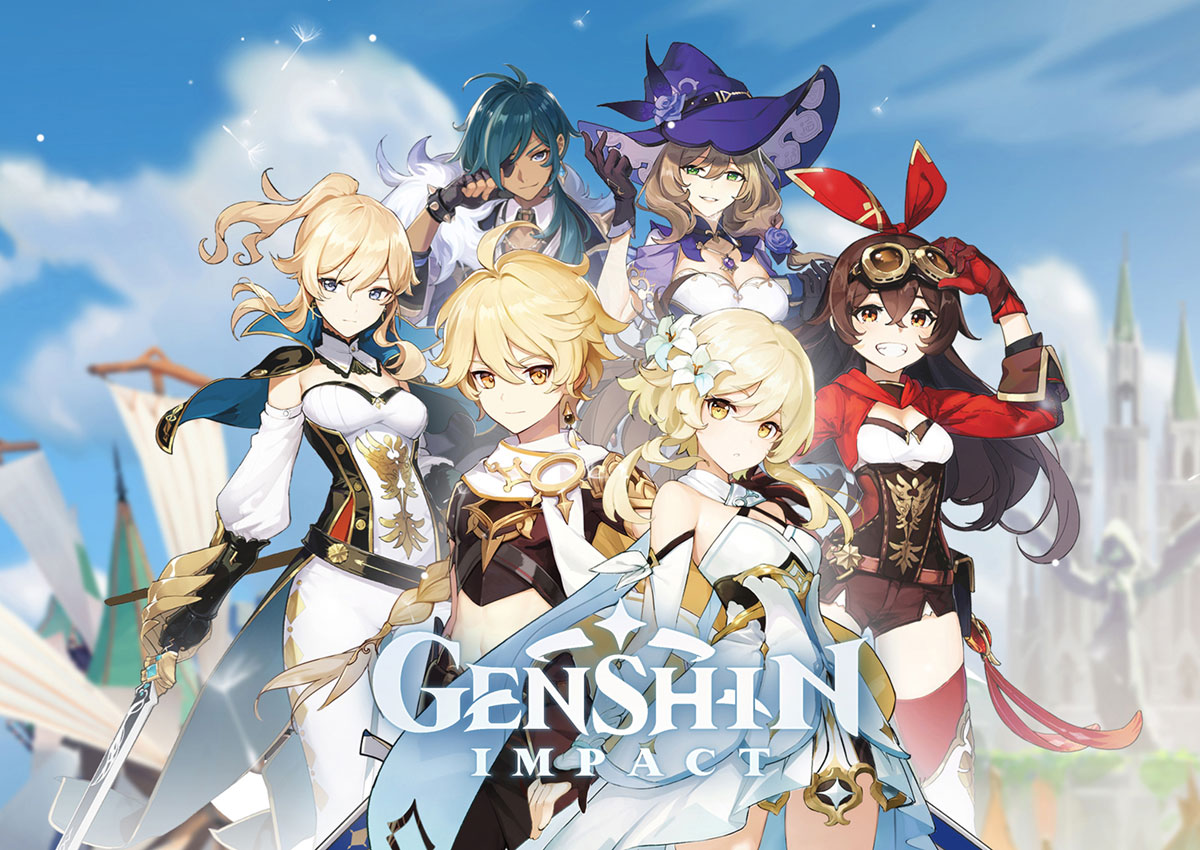 Genshin Impact released on September 28, 2020 across various platforms. And, I must say, this is quite the JRPG. Although this game contains a simple, yet complex, gacha system, it had quite the story to tell. Indeed, I was rather enjoying myself as I traversed the various continents, fought fierce opponents, and skirmished for amazing artifacts. Which is why, dear reader, I will share with you the exciting story of two siblings, Archons, and a world of danger and adventure!

Our story begins with twins Aether and Lumine. They arrive to the world of Teyvat, set 500 years in the past. During this time, they find the land to be in the middle of a cataclysmic war. Before escaping, an unknown goddess appears and uses her power to kidnap one sibling, and seal away the other. After much time had past, the sealed sibling reawakens in Teyvat and begins their quest to find their family.

Upon adventuring, they encounter Paimon, a small floating elf. Paimon listens to the Travelers story, and aids them in their search for their lost sibling. Thusly, the story of the lost Traveler and their somewhat-helpful tour guide begin.

Let The Wind Guide You:

We begin our journey in Mondstadt, the City of Freedom. Here, we get a chance encounter with Amber, a member of the prestigious Favonius Knights. After arriving to Mondstadt, a dragon named Stormterror appears, causing the winds to go berserk. A mysterious voice aids the Traveler, and allows them to combat and fend off the dragon. Afterward, Grandmaster Jean requests the Travelers  help in restoring order in Mondstadt.

Afterward, they encounter the towns local bard, Venti. The bard comes up with a plan to stop Stormterror by using an artifact called the Holy Lyre. Upon retrieving the Lyre from the Fatui, a secret organization of mercenaries, they attempt to use it to calm Dvalin. However, the party discovers that another group, The Abyss Order, is controlling Dvalin by poisoning his mind. After Venti’s true identity as Barbatos is revealed, they then proceed toward Dvalin’s lair.

There, they manage to quell Dvalin’s rage, and free him from the Abyss’s control. Returning to Mondstadt, a Fatui Harbinger named La Signora attacks Venti, and steals his Gnosis. Venti leaves and recovers at Windrise, advising the traveler to head toward Liyue to find the Geo Archon, Rex Lapis.

The Writing Set In Stone:

The Traveler’s next destination takes them to the continent of Liyue, the City of Contracts. There, they plan on meeting the Geo Archon, Rex Lapis. Arriving to Liyue, The Traveler witnesses Rex Lapis’ assassination. Childe, a citizen of Liyue, meets the Traveler and advises the visitation of the Adepti, creatures that also act as gods of Liyue.

After hearing of Rex’s assassination, the Adepti began losing faith in its people, after years of working together. Returning to Liyue, the Traveler and Childe meet Zhongli, a funeral parlor consultant overseeing Rex Lapis’ funeral. Going to the location of Rex’s body, Childe reveals himself as Fatui Harbinger Tartaglia, and attempts to steal Rex’s Gnosis. However, the Gnosis isn’t there, revealing Rex still lives. Childe, in a fit of fury, attacks the Traveler, but loses. However, using Sigils as a back-up plan, Childe summons the ancient god of destruction, Osiel. In response, the combined efforts of the Traveler, Adepti, and people of Liyue manage to defeat the ancient beast.

After the defeat of Osiel, Zhongli reveals his identity as Rex Lapis. Back at Northland Bank, Zhongli reveals he made a contract with La Signora to surrender his Gnosis. Seeing as how Liyue would be safe without him, he takes his leave.

Upon returning to Mondstadt, the Traveler meets a mysterious man by the name of Dainsleif. He asks for the Travelers’ help to uncover a plot by the Abyss Order to create an artificial god, toppling Celestia. During the investigation Dainsleif suddenly turns on the Traveler, sparking a duel. Suddenly, the Travelers sibling appears, revealing them to be the leader of the Abyss Order.

The sibling tells them to not believe everything they see or hear about this world, before departing once more. Dainsleif gives chase whilst the Traveler continues their journey. Their next destination; Inazuma.

Beidou, a ship captain, allows the Traveler to board her ship to Inazuma after he wins a tournament of strength. Arriving to Inazuma, the City of Immortality, they find that all borders have been closed under order of The Electro Archon, Baal.  Upon arrival, the Traveler learns of the Vision Hunt Decree, who are taking people’s Visions. From there, they meet Touma, the Chief Retainer of the Kamisato Clan. Reluctantly, the Traveler agrees to assist them in resisting the Decree. Touma is eventually arrested, with his Vison nearly taken from him.

However, the Traveler interferes with this, sparking a duel with the Electro Archon. After losing the duel, Touma and the Traveler flee, and recieve a warrant for their arrest. Touma asks for help investigating the Decree, revealing Harbinger Scaramouche behind it all. During the confrontation, the Traveler is defeated, but is rescued by Yae Miko. Yae reveals that she gave Scaramouche the Archon’s Gnosis, because she no longer needed it. Despite this, she asks the Traveler to assist Kujou Sarah of the Tenryou Commission in revealing the truth to Baal.

Unfortunately, upon delivering the evidence, the Traveler is once again confronted by La Signora. In one final duel, La Signora loses to the Traveler, and is killed swiftly by the Electro Archon. However, the Raiden Shogun challenges them once again. Yae Miko finds her way in and intervenes, allowing the Traveler to gain the upper hand and defeat Baal. After the duel, she admits defeat, and repeals the Vison Hunt Decree.

Afterward, Miko states she doesn’t know anything about the goddess the Traveler wishes to speak of. However, she directs them to travel to Sumeru, the land of Wisdom, to seek answers. There, they can speak with the Dendro Archon, Kusanali.

And, there you have it. The story of Genshin Impact, so far, is quite exhilarating! If you would like to share your opinion on Genshin, be sure to leave a comment down below. Also, be sure to check out our Facebook Page, and say hello! We’d love to hear from you! As always, Stay Geeky!

In this article:Genshin, Impact, JRPG, Teyvat