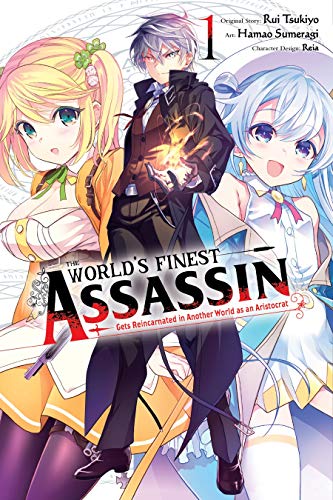 Worlds Finest Assassin Reincarnated In Another World As An Aristocrat. Man, what a mouthful. But, boy, does it sure make one hell of an anime to watch. Despite the lengthy title, the plot for the series is quite simple. But before we get into all that, I must inform you, the reader, that this series is brand new. Meanwhile the novel, itself, only has a few series published. In addition, the anime adaptation released on Crunchyroll only has up to eight episodes available. So, we’ll do our best here to cover what we know.

Assassin and Goddess strike a deal. Image provided by aniblogtracker.com

The plot for the series is simply put. An old man working as an assassin has reached retirement. However, the aircraft he boards had been sabotaged, resulting in his death. He is then brought before a Goddess, who grants him a second chance at life. Set to resurrect in a world of ‘swords and magic’ with a unique skill set, all he wishes for is an ordinary life. However, the Goddess has a catch: by the time he reaches 18-years of age, he must assassinate that world’s Hero.

The two come to an agreement, and the man arrives to the new world as Lugh Tuatha Dé. Despite having a doting mother and a strict father, everything for Lugh is falling well according to plan. The boy’s main goal to a new life, and to assassinate the world’s hero, begins.

The light novel series is written by Rui Tsukiyo, the author of Redo of Healer. That’s right, folks. The creator of the most controversial series is the same person responsible for this outstanding one! The illustration is done by Reia, their various works done for different publishers. The series began publication in July of 2018, on the website Shōsetsuka ni Narō, until October of this year.

Afterward, the series was later acquired by Kadokawa Shoten. Up to six volumes had been published by the company since February 2019. Secondly, Yen Press, a graphic novel publisher, began publication for North American readers soon after.

Needless to say, the success of the manga certainly led up to quite the quick anime adaptation. The anime series began airing on October 6th of this year, and even began airing on the streaming service Crunchyroll.

With more episodes of the anime to come, I personally can’t wait to see if Lugh can defeat the Hero when the time arrives. If you can’t wait for the series, the novel is always available at your local bookstore. Worlds Finest Assassin airs new episodes weekly on Crunchyroll for now. So, we here at Geek News Now will be keeping a close eye on things, and look forward the possible conclusion to Lugh Tuatha Dé’s story.

If you have an opinion, or want to tell us how you feel about this series, be sure to let us know in the comment section below. Also, be sure to stop on by our Facebook page, and say hello! We’d love to hear from you all.