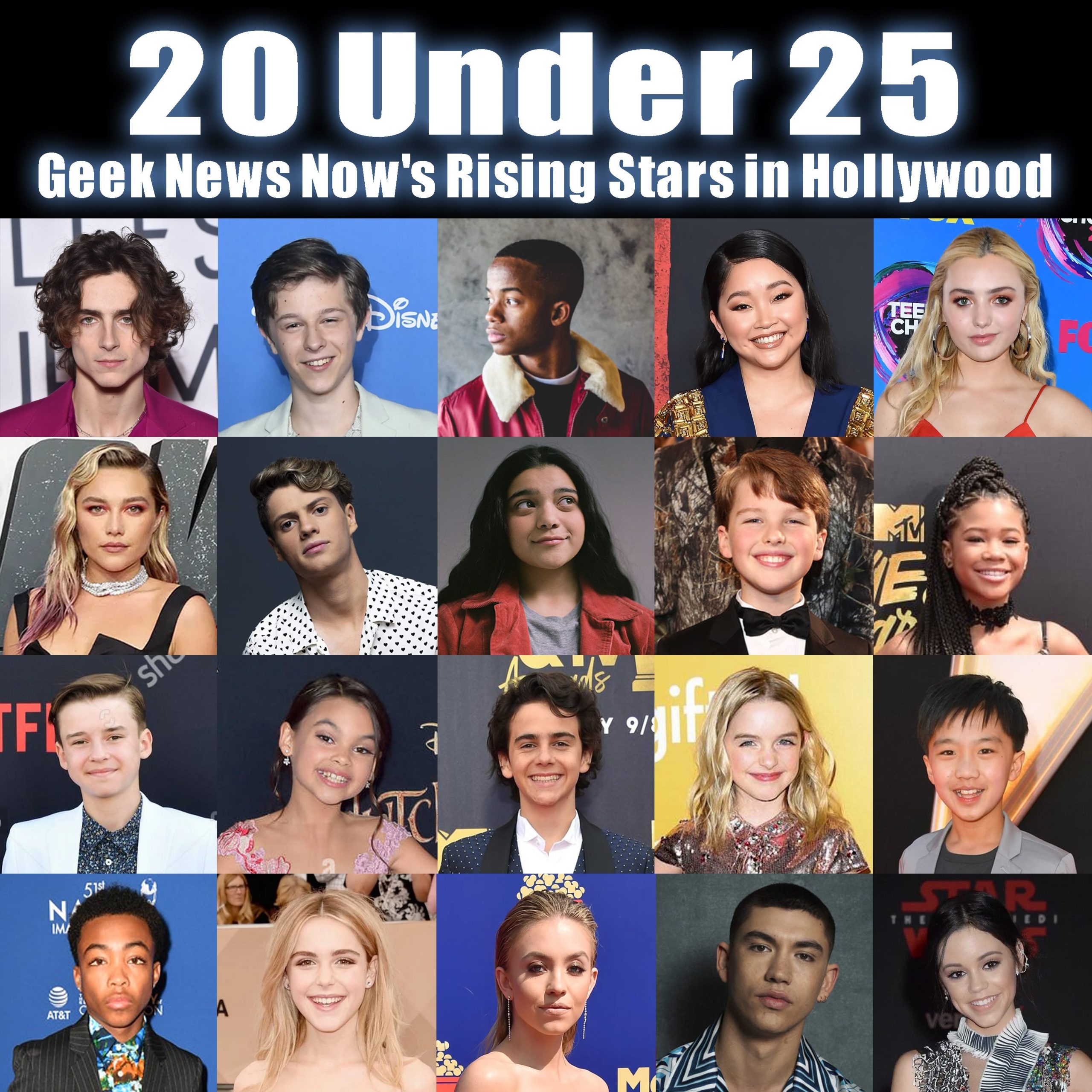 Before you start ripping the list apart, this is not intended to be a list of the hottest actors/actresses in Hollywood or the very best in movies or a series today. This is a list of people that are “on the rise”. You may have heard of them, but you may not. Regardless, they are our Rising Stars and you can expect to see more of them in the future. Keep your eyes peeled as this next generation is bound to make their mark on movies you will enjoy. All images are from the respective actors IMDB pages, linked in their name.

20. Iman Vellani – Known for: Ms. Marvel, The Marvels. The popularity of Marvel is not going away anytime soon and with Iman starring in both projects, this will be her official introduction to the world. No information provided by her representatives at the time of publication. Should we get updated information, this article will be edited.

19. Jenna Ortega – Known for: Scream, Jurassic World: Camp Cretaceous, Elena of Avalor. Winner of an Imagen Award for “Best Young Actor in Television” in 2018, Jenna is restless in her profession, accounting for more than 15 television staples and blockbuster films to date, commonly accepting lead roles.

18. Archie Renaux – Known for: Morbius, Shadow and Bone, Voyagers. No information provided by his representatives at the time of publication. Should we get updated information, this article will be edited.

17. Sydney Sweeney – Known for: The Handmaid’s Tale, Everything Sucks!, Strawberry Spring. Nominated for two Young Artist Awards, Sydney Sweeney has also guest starred in TV shows such as Pretty Little Liars, Criminal Minds, Grey’s Anatomy, 90210, and the series In the Vault. She also starred in the psychological thriller Clementine  and the alongside Andrew Garfield in the thriller Under the Silver Lake. Sweeney also starred in the horror film Along Came the Devil.

15. Asante Blackk – Known for: Dora the Explorer, This Is Us, When They See Us. Nominated for ten awards since 2019, Asante started acting at only 6 years old. He was cast as Mowgli in The Jungle Book in 2008, which ignited his passion. His grandfather, Dennis Wiley, is an accomplished songwriter and musician. He is also the nephew of Rashar Morton, a graphic design artist and the nephew of acclaimed Emmy-award winning actress, Samira Wiley.

14. Ian Chen – Known for: The Rocketeer, Shazam!, Yasuke. Nominated for a Young Artist Award and a Young Entertainer Award. At age 5, Ian booked his first national commercial and has since then, steadily worked in commercials, print, and television shows. Besides acting on camera, he is also a voice actor, having a recurring role in Disney Junior’s Fancy Nancy, and being featured in animation films Wish Dragon.

13. McKenna Grace – Known for: Ghostbusters: Afterlife, Young Sheldon, Captain Marvel. Winner of the Hollywood Critics Association Award and nominated for a Primetime Emmy Award. No additional information provided by her representatives at the time of publication. Should we get updated information, this article will be edited.

12. Jack Dylan Grazer – Known for: It, Shazam!, Luca. Jack’s career has certainly taken off in the past few years and it continues to skyrocket with another superhero film on the horizon. Winner of several cast/ensemble awards he’s looking to break out. His role as “Eddie Kasbrak” in the Stephen King feature film It (2017) marked Jack’s first studio picture.

11. Ariana Greenblatt – Known for: The Boss Baby: Family Business, Avengers: Infinity War, Love and Monsters. Greenblatt has always known that she wanted to be an actor, with a burgeoning professional career beginning when she was 6 years old, as evident through early roles on Disney’s “Liv and Maddie” and Nickelodeon’s “Duda Brothers.” She recently completed production on Sony Pictures Entertainment’s sci-fi thriller 65, from A Quiet Place writers, Scott Beck and Bryan Woods, who have teamed up with Sam Raimi for their directorial debut. Greenblatt stars opposite Adam Driver.

10. Maxwell Jenkins – Known for: Lost in Space, Reacher, Sense8. Winner of a Young Artist Award and nominated for two Saturn Awards, Maxwell made his performing debut at the age of 3 as an acrobat performing handstands on his father’s hands in his family’s theatrical circus company called Midnight Circus. When not filming, Max can regularly be found playing Mandolin and holding down vocals with his band “Cowboy Jesus & the Sugar Bums” who were awarded a Chicago Music Award in 2015 for Best Young Talent.

9. Storm Reid – Known for: A Wrinkle in Time, The Suicide Squad, The Invisible Man. A nominee for both BET Awards and Teen Choice Awards, she landed her first feature film role opposite Brad Pitt, Paul Giamatti, Chiwetel Ejiofor and Michael Fassbender in the Academy Award winning film Twelve Years a Slave directed by Steve McQueen.

“Nothing’s impossible, because in the word ‘impossible,’ it says, ‘I’m possible.’ Always know that no matter what, you can always do it, and don’t let anybody tell you differently.”

8. Iain Armitage – Known for: Young Sheldon, Big Little Lies, Paw Patrol: The Movie. A nominee for multiple awards as early as the age of 10, Iain is certainly known to fans of The Big Bang Theory. He is also an avid tap dancer, saw his first stage show when he was three years old, and began posting play reviews and his own renditions of Broadway songs under the name Iain Loves Theatre. It’s only a matter of time before this teenage actor ends up in a leading role on the big screen.

7. Jace Norman – Known for: Danger Force, Henry Danger, The Adventures of Kid Danger. He’s brought home a Kids’ Choice Award six years…in a row. He wears tights already on his TV shows, he’s funny, he does action, it’s only a matter of time before he winds up in a blockbuster film. He is also a producer, having produced 11 episodes of Henry Danger, along with the Henry Danger spin-off Danger Force.

6. Florence Pugh – Known for: Hawkeye, Black Widow, Lady Macbeth. This will be the last year we can put Florence on this list and if you haven’t heard of her by now, it’s time to get dialed in. Her trophy shelf is already crammed with 34 trophies and an Oscar nomination. Not bad for the past five years work. Clearly going to the same school as Sir Laurence Olivier, Emilia Clarke and Kit Harington has paid off and will continue to pay off for years, or decades, to come.

5. Peyton List – Known for: Blade Runner: Black Lotus, Cobra Kai, Batman: Hush. With a Young Artist Award and a Young Entertainer Award under her belt, Peyton is committed to mentoring the next generation of young women who look to her for advice and inspiration.  She released her first music single titled, “Liar Liar,” followed by another single release titled, “Dance Till We Die” which was featured in the indie drama film Anthem of a Teenage Prophet.

4. Lana Condor – Known for: X-Men: Apocalypse, Alita: Battle Angel, Deadly Class. Winner of a Hollywood Critics Association Award as well as a MTV Movie + TV Award. She made her film debut in X-Men: Apocalypse, portraying Jubilation Lee / Jubilee. Condor was born on May 11, 1997 in Can Tho, Vietnam and was adopted by her American parents. At 11 years old, Condor and her family moved to New York City, where she continued her classical ballet training, dancing at multiple prestigious academies including the Joffrey School of Classical Ballet, the Gelsey Kirkland Academy of Classical Ballet, and the Alvin Ailey American Dance Theater.

3. Coy Stewart – Known for: Agents of S.H.I.E.L.D, The Blacklist, I, Challenger. Another winner of the Young Artist Award, Coy has eight movies or series under his belt in just the past two years. No additional information provided by his representatives at the time of publication. Should we get updated information, this article will be edited.

2. Graham Verchere – Known for: Stargirl, Supergirl, Fargo. With Young Artist Awards and Young Entertainer Awards up on the mantle, Graham has dabbled in the Muppets, DC Comics properties, and My Little Pony. No additional information provided by his representatives at the time of publication. Should we get updated information, this article will be edited.

1. Timothee Chalamet – Known for: Dune, Wonka, Little Women. Okay so by now you’ve probably heard of Timothee since Dune was released last week, but did you really know that much before him? Homeland? Interstellar? Hot Summer Nights? He’s definitely on the rise and Dune is another springboard. You’ll be seeing a lot more of this young actor in the future. His IMDB page boasts 40 wins and 86 total nominations including one for an Academy Award. His future projects will guarantee you’ll be seeing a lot more of him in the years to come.