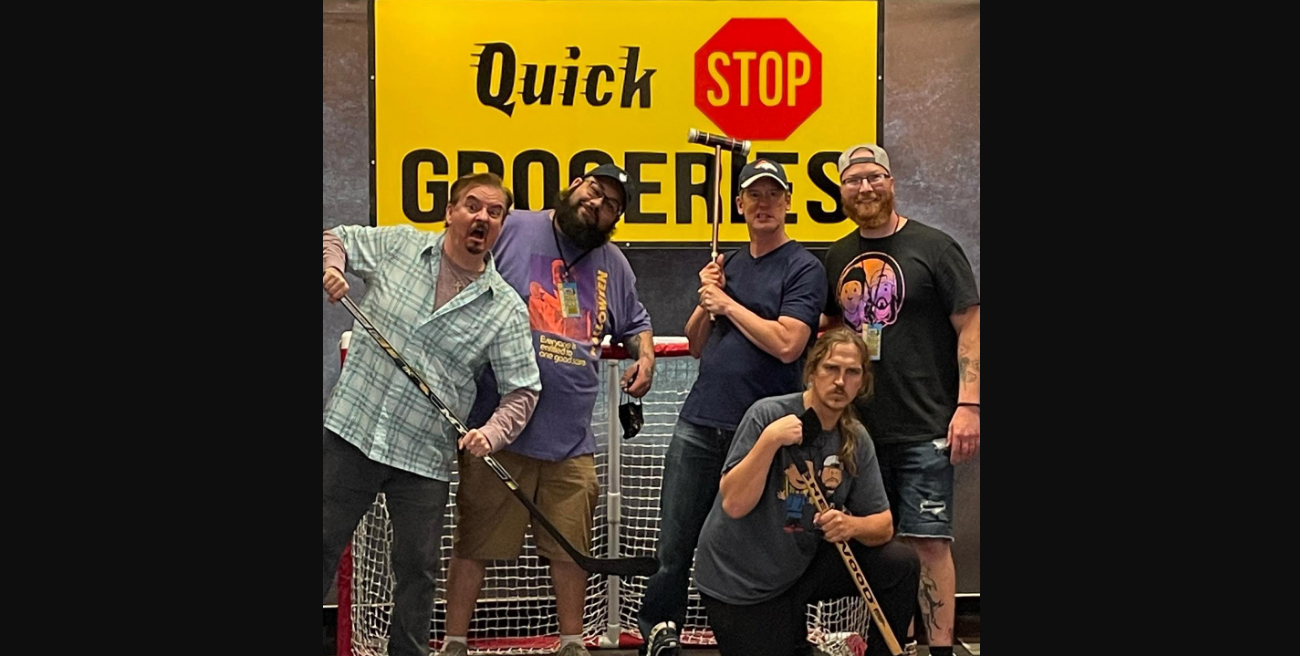 For a good geeky/nerdy time, I went to the 2021 Bangor Comic & Toy Con (BC&TC)… It was awesome! If, like me, you get anxious around the bigger cons with bigger space and bigger crowds, then the BC&TC is perfect for you! This event, like many other cons returning in this time of pandemic, was a welcome break for con-goers over the weekend of October 1st-3rd at the Bangor Mall in Bangor, Maine.

For me, the biggest fun was this: cosplaying/seeing other cosplayers all three days, hanging with friends I met up with and sharing in all things geeky/nerdy, and talking with some of the celebrity guests; like Clerks (1994) and Clerks II (2006) trio Brian O’ Halloran (Dante), Jeff Anderson (Randal), and Jason Mewes (Jay) who were utterly awesome!

I managed a brief chat with Anderson whose character “Randal” once posed an interesting point about Original Trilogy Star Wars vs. the Lord of the Rings movies; I told him I could see his points but would always love LOTR too… but then he asked me which trilogy I’d pick and I said “don’t make me *choose*!”

Another fun moment was telling celeb guest Noah Hathaway — “Atreyu” from The Neverending Story (1984) — that I, unlike so many, was not traumatized by the “death of Artax” scene! I may have been putting on a brave face when I told him that…

Being in a mall and not the usual Cross Insurance Center location, I thought it would be confusing and hard to make sense of for the layout of activities and vendors; but over the weekend I found out that this con’s showrunners can make it happen anywhere and it’ll still be a great time!

Marc Contard, who enjoyed three BC&TC shows so far, said it was worth the wait to enjoy the people and the celebrity guests; his favorite aspect being getting autographs and seeing what the vendors had to offer.

“It gets better every year!” said Contard. “It gets more well-attended. And the quality of the guests keeps going up and up and up!”

Michael Towne, a long-time BC&TC attendee since the beginning in 2015, enjoyed the Saturday events: “So far it’s been really awesome! The vendors all pulled out all the stops, and meeting Mick Foley was just sweet. I still got panels later on, a costume contest, and I see more people have brought more stuff; a lot of people have brought their A-game to their costumes!”

I needed this con! The BC&TC definitely came through at the right time for all those who waited since 2020 and a few reschedules. The weekend event saw a lot of traffic and thankfully many people, staff included, remembered to mask up for the safety of others; some attendees did not. I hope a state of normalcy returns and we can attend cons again more and more.

Clifton Moser enjoyed himself; this being his second time at a Bangor Comic & Toy Con: “Considering the heck that was 2020, the fact that so many people have come out to this one is amazing; I love it! Between the con-goers, the cosplayers, the variety of stuff you can find and all the stuff that tickles your nostalgia if you were young.”

There were events which you’ll find at most any con but the Bangor Comic & Toy Con is special. The showrunners and their team go out of their way to make it a fun weekend for all. Plus, chances are you’ll run into old friends and make new friends! While my feet screamed at me for all the walking I did, I have no regrets and utterly enjoyed myself at this con which is very much my pace.

The next Bangor Comic & Toy Con is slated for April 22nd-24th, 2022 and I know I plan to be there for another bangin’ good time with my geeky/nerdy people! The owners plan to hold pop up events, signing events, private signings, a half way con in October of 2022, live podcasts, art events, and much more. Keep an eye out for announcements on the Bangor Comic & Toy Con Facebook page!

Think you’d make a trip to Maine for the Bangor Comic & Toy Con? Comment below! Check out this Geek News Now article on tips for your first comic con! Also, subscribe to Geek News Now and give its Facebook page a like!