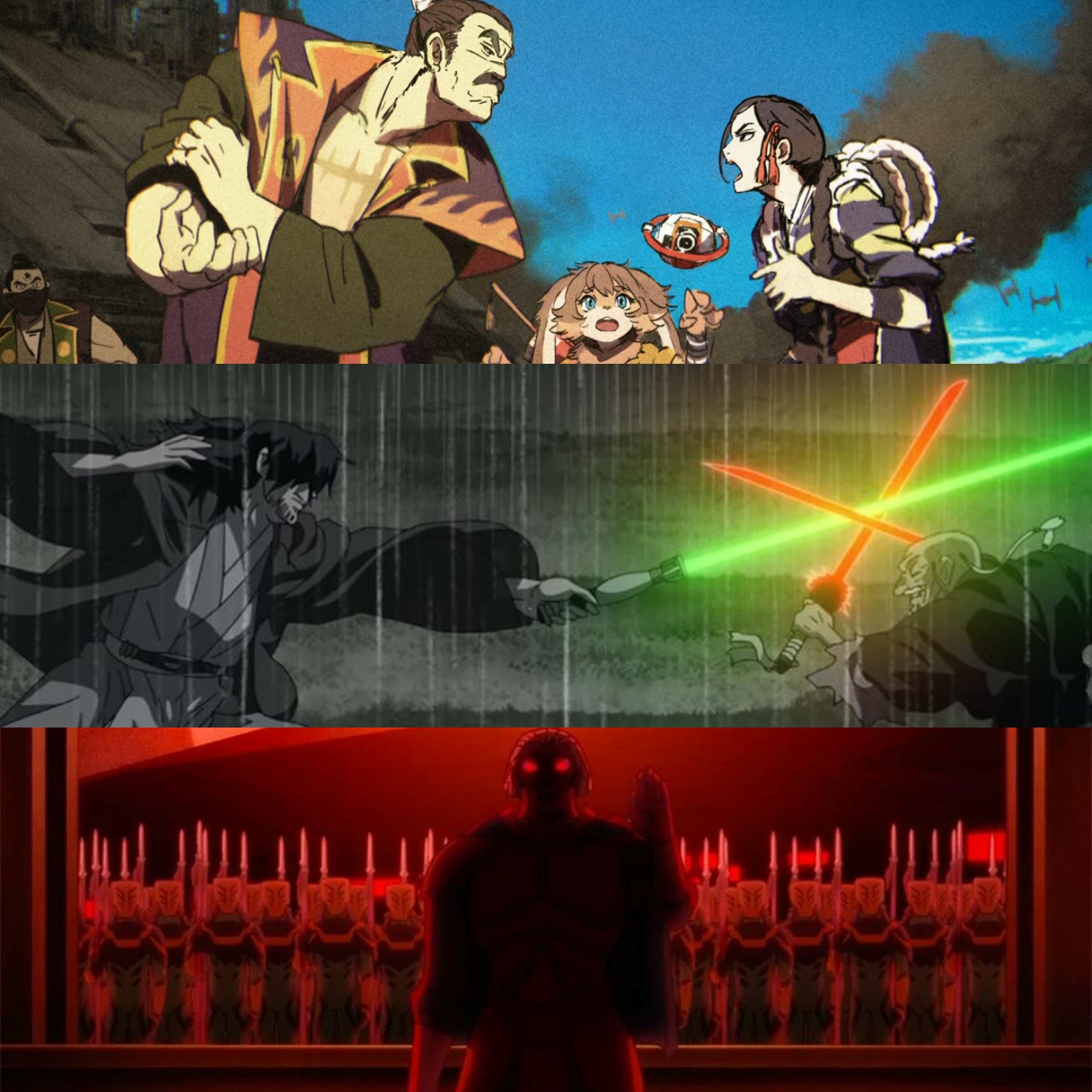 Star Wars: Visions debuted last Wednesday (September 22nd) on Disney+ and it has quickly become some of the best Star Wars content around! The project between Lucasfilm LTD. and seven of the biggest anime studios in the world ( Kamikaze Douga, Studio Colorido, Geno Studio, Trigger, Kinema Citrus, Production I.G, and Science SARU) is an anime-style anthology series made up of nine self-contained vignettes. But how do the individual episodes fair? We’ll be breaking the series down for dissection across three different articles focusing on three episodes each. Missed our reviews of the first six episodes? Then check them out here: Episodes one through three and episodes four through six. Let’s conclude this review and take a dive into the final three episodes: The Elder, Lop and Ocho, and Akakiri. Spoiler warning for these episodes!

The Elder feels pretty short even compared to the other episodes. The story itself is nothing special but I like how it approaches the “jedi vs. sith” story with a slightly different angle than everything else up until this point. I don’t feel particularly strong about it, it’s just kind of there. But if you have enjoyed the lightsaber action up until this point then you’ll enjoy this episode. This episode was developed by studio Trigger.

The elder begins with a padawan, Dan (voiced by Jordan Fisher) and his master, Tajin (voiced by David Harbour) cruising through space when all of a sudden Tajin feels a dark presence. They make their way to the closest star system and begin to investigate a village for the dark presence. The villagers report a mysterious old man who recently arrived and now lives in the mountains. The jedi decide to split up in order to cover more ground. Dan enlists the help of a few children from the village to serve as guides for him through the mountains. Meanwhile Tajin comes across an empty ship that doesn’t look modern but one that he recognizes as associated with sith.

Dan stumbles across an animal that has been killed with lightsaber markings and he is found by the old man they have been looking for. Tajin now senses the darkness and hastily runs towards his padawan. The old man reveals two red lightsabers and it becomes apparent that he is indeed the darkness they have been searching for. When Dan questions him about being a sith the old man states that he hasn’t been a sith in a very long time and is now something entirely different. The two duel but Dan is eventually bested and severely injured.

The Elder gets a little too close for comfort to Dan.

Tajin arrives to find his apprentice down and on the brink of death. Tajin engages in combat with the elder and is surprised at just how dangerous the old man really is. Just when it looks like the elder is going to strike him down, in a desperate last ditch effort Dan hurls his lightsaber as a distraction. Giving Tajin the split second he needed to stab the old man in the heart. His corpse dissolves into carbon or rocks and the two jedi re puzzled by this. At the same moment of his death, the elder activates his ship’s self-destruction mechanism. Leaving the two jedi with more questions than answers.

What helped this episode to rise above being simply average was the message of the story. At the start Tajin chastises Dan for wanting to seek action and glory and being over zealous in his duties as a jedi. By the end, however, Dan has learned about how his recklessness nearly ended his life and how tempering aggression and showing compassion are not weaknesses but strengths. I am left feeling intrigues about the mystery of the old man however. Overall a decent episode.

Lop and Ocho is easily my favorite episode of this final set. It’s full of beautiful scenery and amazing set pieces that spark that sense of wonder that we come to expect from Star Wars. We also get a moving and tragic story that I want to see more fully explored one day. Made by Geno Studio, it is a wonderful addition to the anthology.

Set during the Galactic Civil War, Lop and Ocho starts off with a rabbit-like creature, named Lop (voiced by Anna Cathcart) , who is a slave for the Empire on the Tau system. The Empire is extracting raw materials from Tau’s beautiful landscape. Lop wanders into a bazaar where her hunger causes a scene and she is met by Tau’s leader, Yasaburo (voiced by Paul Nakauchi of Overwatch fame), Yasaburo’s daughter Ocho (voiced by Hiromi Dames) convinces her father to adopt Lop.

Fast-forward to seven years later and Lop has become a full member of the family and a rift has appeared between Ocho and her father. Yasaburo wants to fight the empire off so they will stop exploiting the planet’s resources, while Ocho thinks they should continue to play nice with them as they bring lots of value and innovation to Tau. Things come to a head when Ocho essentially defects to the empire (as a way to spare Tau from further imperial aggression), much to Lop’s disappointment. When Lop informs Yasaburo of what has happened, the clan leader leads Lop to a hidden room where he gifts her a family heirloom, an ancient lightsaber that has been passed down through the generations. He then leaves to meet with Ocho at the imperial compound.

Yosobaru passes on the family’s lightsaber to Lop.

When Lop hears and explosion and sees smoke in the distance she decides to pursue. Upon her arrival she sees various members of Yasaburo’s clan in combat with storm troopers. Ocho attacks Yasaburo and blinds him in his one last good eye, rendering him completely visually impaired. Lop leaps in and Ocho is enraged to find that their father chose Lop to inherit the lightsaber. They come to a stalemate and Ocho retreats off-world. Lop vows to return her sister so they can be a family once again.

I loved this episode so much! The message of family not being blood but who you choose to let into your life resonates strongly with me. The conflict between father and daughter to achieve seemingly similar goals albeit through different means was interesting to watch. The art and scenery feels so beautiful in lived-in that it was a visual feast. Just about every single aspect of this episode is executed with love and perfection. It gives The Ninth Jedi a run for it’s money, in fact I think for me they are tied for best of the anthology.

For as amazing as Lop and Ocho was, Akakiri feels a bit like a downer. Besides the somber and darker tone, it also has one of the only bad endings in the series. I felt this episode was a bit of a weak ending for the anthology as there was nothing that made it feel impactful or dynamic, more like ending on a whimper. This episode was done by Science SARU.

It’s such a bummer that instead of writing out the synopsis I will just cite the wikipedia entry for this summary:

“Prior to the initial extinction of the Sith, a Jedi named Tsubaki (voiced by Henry Golding of Crazy Rich Asians), who has been suffering from visions of an unidentified individual dying in front of him, reunites with his old love Misa (voiced by Jamie Chung), a princess who has been overthrown by her dark-side-wielding aunt Masago. With the aid of guides Senshuu (Star Trek’s George Takei) and Kamahachi, Tsubaki and Misa make their way to the royal palace. Masago captures Tsubaki’s friends and overpowers him, then attempts to convince him to join her as her apprentice. When Tsubaki refuses, Masago’s masked henchmen attack him; Tsubaki kills them, but also accidentally kills Misa dressed in their uniform, just as he had foreseen. Completely broken, Tsubaki agrees to join Masago, forming a dyad to resurrect Misa, and departs.”

While the animation style is neat and an interesting creative choice, the story feels pretty unremarkable. We get glimpses of Tsubaki’s past and such but there isn’t much else to this episode that makes it particularly good. In an anthology of amazing art styles, choreography, and stories this episode just is not memorable in any way. Definitely the weakest episode of the entire mini-series.

As a complete product this anthology is so refreshing and amazing, one of the better Star Wars properties we have seen in a long time! I really hope Disney does another round of Visions and gives more anime studios the opportunities to do these kinds of stories. Agree or disagree with my thoughts on any of the episodes? Chime in and comment down below. Our Facebook is here, and our Twitter is here. Want to keep up with my gaming takes and thoughts then you can follow me here! Keep it here on GNN if you want to keep up with all the geeky news and reviews.