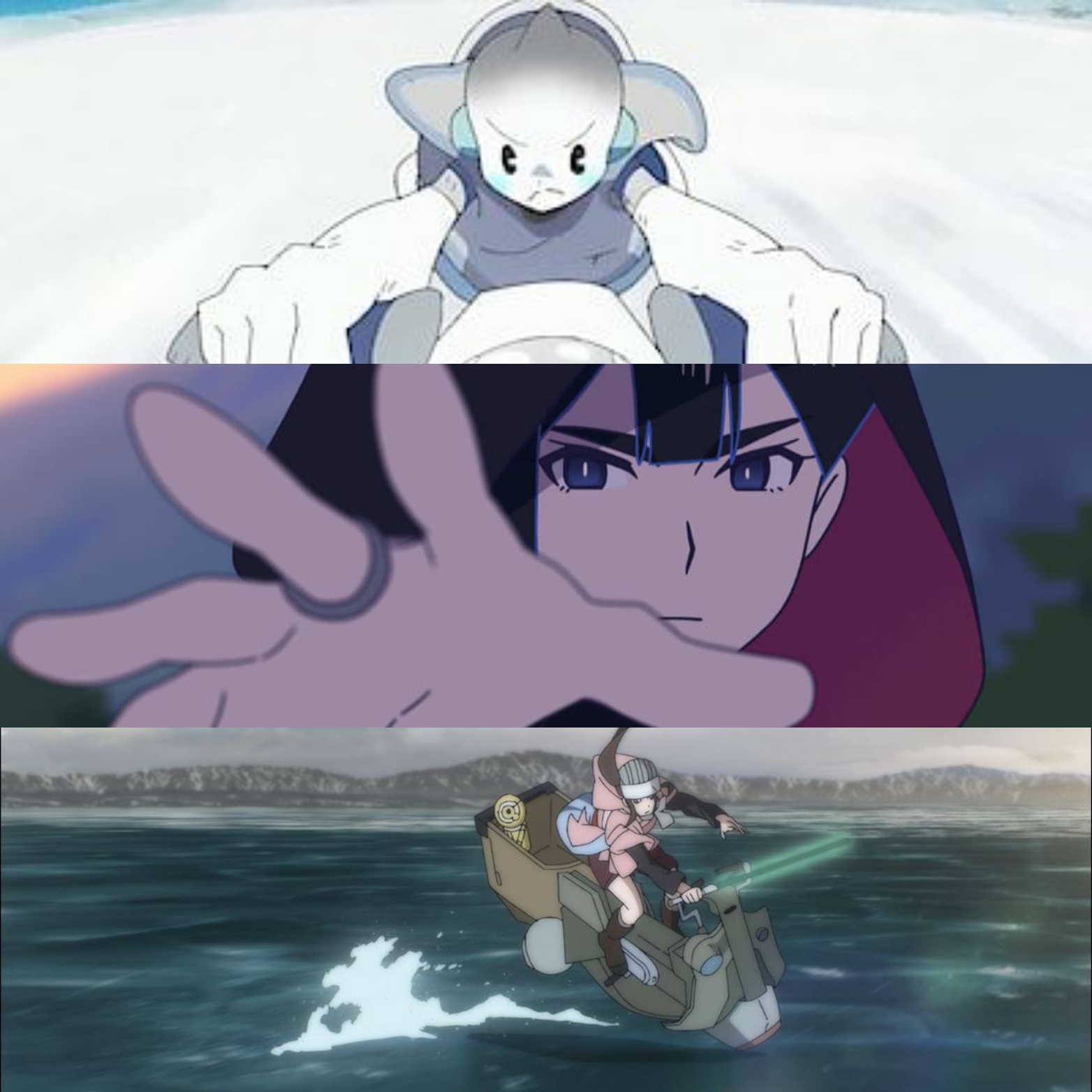 Star Wars: Visions debuted this past Wednesday on Disney+ and it has quickly become some of the best Star Wars content around! The project between Lucasfilm LTD. and seven of the biggest anime studios in the world ( Kamikaze Douga, Studio Colorido, Geno Studio, Trigger, Kinema Citrus, Production I.G, and Science SARU) is an anime-style anthology series made up of nine self-contained vignettes. But how do the individual episodes fair? We’ll be breaking the series down for dissection across three different articles focusing on three episodes each. Let’s continue with the review and take a dive into episodes four, five, and six. Spoiler warning for these episodes!

The Village Bride has a much more subdued art style compared to some of the other episodes in the anthology. Studio Kinema Citrus uses a softer color palette with this one and I think it is used with great effect. Interestingly enough the first two-thirds of this episode feel like it could be an original anime story, as actual Star Wars elements are not really introduced until near the end.

This story focuses on a former jedi, F (voiced by Karen Fukuhara), who has sought refuge on a remote planet some time after the Great Jedi Purge. Along with her companion, Valco (voiced by Cary-Hioryuki Tagawa, yup, Shang Tsung himself), the pair come across a mountain village who are under threat of a warlord with a droid army. The village is prepared to offer up their chief’s daughter as a hostage in return for safety. F and Valco however interfere and dispatch of the warlord and his group. F leaves the planet shortly after.

There are several things the episode does that I do enjoy, despite it being my least-liked episode of this group. One of the cool lore-expanding things they do with this one is give the local indigenous population of the village a different lens for viewing the force. They call it “magina” and view it as their connection to the planet and nature. This is something we don’t often see in most Star Wars stories and I appreciated the extra world-building. The other thing I liked was how F’s lightsaber has a much more traditional katana design with a flat edge and katana-style hilt with a yellow glow.

That said the episode is a bit of a slow burn compared to the other episodes that flesh out their stories at a quicker pace. Overall I enjoyed it but felt it was the weakest episode thus far.

This is easily my favorite episode of the six I have seen so far. The characters, the voice work, the animation, the expanded lore, and the story are all fantastic! Previous episodes exceeded at one or more of those categories, but I think The Ninth Jedi nails every major aspect! I still have not seen the last three episodes but this one has definitely risen the bar significantly. The Ninth Jedi is a sort of whodunit with an awesome twist that caught me off guard! This episode was made by studio Production I.G.

In the future, long after The Rise of Skywalker, the jedi are nearing extinction as a resurgence of sith has begun to spread. The Margrave Juro issues a desperate plea to the rest of the galaxy for any surviving jedi to find their way to his orbital temple where the art of creating lightsabers has been rediscovered. Seven jedi, including Ethan (played by Masi Oka of “Heroes” fame) have answered the summons and await an audience with the Margrave but are greeted by his droid in the meantime while they wait for him and the arrival of the newly forged lightsabers.

Down on the planet below the lightsaber smith, Zhima (voiced by Shang-Chi himself, Simu Liu), has just finished construction on the sabers and an extra one for his daughter, Kara (voiced by Kimiko Glenn). The lightsabers that Zhima creates are unique in that their color is attuned to the wielder. Kara’s saber color is a murky dark green color as she has yet to develop a proper connection with the force. Just then a duo of suspicious men arrive and open fire on Zhima while Kara escapes to deliver the freshly minted sabers to the jedi above.

After a fun escape sequence that resembles the speeder bike scene from Return of the Jedi, Kara delivers the sabers to the jedi. Lo and behold the ignited sabers all turn red except for one! The jedi are actually sith who have come to eliminate the margrave, who reveals himself to be inside the chest of his massive droid. After a lengthy battle, Kara , Ethan, Juro, and one other corrupted jedi have prevailed and begin their journey to rescue Zhima and re-establish a new jedi order.

The Sith have revealed themselves, much to Ethan and Karra’s confusion.

This story introduces one of my favorite possible lore tidbits, and that’s the fluid lightsaber design. Instead of lightsabers having a fixed color, their color is affected by the wielder. Which works perfectly here when the sith ignite the sabers as it reveals to the audience what their true nature is without a single word. We see this change as one of the “sith” is actually a jedi who is corrupted easily by the presence of so many dark side users.

As the battle progresses we see his saber color go from red to purple as more sith are killed and finally Juro talks some sense into him. Kara’s lightsaber also goes from a shadowy transparent look to a full on green blade as she firmly defies the sith in combat.  This episode also has so much potential for a follow up mini-series with likable characters and amazing action set pieces. I really want to know if they will be able to rescue Kara’s father. I know I said I wanted Tatooine Rhapsody to become a miniseries but I have now changed my mind in retrospect. Make it happen Lucasfilm and Production I.G.!

T0-B1 is very blatant with it’s homage to Astro Boy in just about every way. We have a robot kid who wants to be a champion of good accompanied by his robotics expert creator who tries to guide him. Not to mention T0-B1’s name is pronounced as Tobi, a reference to Astro Boy’s owner’s biological son, Tobio. This episode was developed by studio Science SARU. While the story itself isn’t particularly strong, the animation has this beautiful chalk-drawn aesthetic and the almost old school Disney animation design seeps in every now-and-then, especially whenever Professor Mitaka is in a scene. I enjoyed it more than The Village Bride at least.

T0-B1 opens with our main character, a robot boy(voiced by Jaden Waldman) of the same name who wants to become a jedi. His creator, professor Mitaka (voiced by Kyle Chandler) has his own reservations against T0-B1’s wish but gives him an ultimatum that he must find a kyber crystal for constructing a lightsaber if he wishes to become a jedi and that there is a kyber crystal somewhere on the planet. Much to his dismay, T0-B1 searches allover the small planet but cannot find it. Desperately he goes into the professor’s forbidden basement where he activates the professor’s imperial shuttle. This sets off a beacon alerting the empire to their location.

Mitaka chastises T0-B1 before realizing that they will soon be in danger and thus he has T0-B1 hide in safety. When T0_b1 emerges later he finds the lab, and his droid friends, destroyed as well as a burial urn of Mitaka. To honor his last wish T0-B1 works painstakingly to restore life to the lifeless planet as the professor wanted to. Doing so unlocks the kyber crystal stored within T0-B1 and he uses it to construct his lightsaber. Unfortunately an Imperial Inquisitor is drawn back to the planet and confronts the would-be jedi robot. They have an epic clash in which T0-B1 wins but is damaged in the process. T0-B1 rebuilds his droid friends and then leaves the planet in order to explore the galaxy.

It’s not necessarily that T0-B1 isn’t good, it’s just when compared to the rest of the anthology it feels a bit weak. The cute art style and wholesome story-telling are endearing, but not enough to really make me like it. There is something there though, T0-B1 feels like it would benefit the most from a longer story, unfortunately it just wasn’t long enough for me to really care about the tale.

Disagree with my opinions? Sound off in the comments below. Alternatively, what are your favorite episodes thus far? Comment and I’ll do my best to respond. Missed my review of the first three episodes or want a refresher? You can find it right over here! My final piece in this review series, episodes seven through nine, will be up later this week. For more geeky takes, news, and reviews keep it here on GeekNewsNow! Follow GNN on our social media accounts! Our Facebook is here, and our Twitter is here. Want to keep up with my gaming takes and thoughts then you can follow me here!