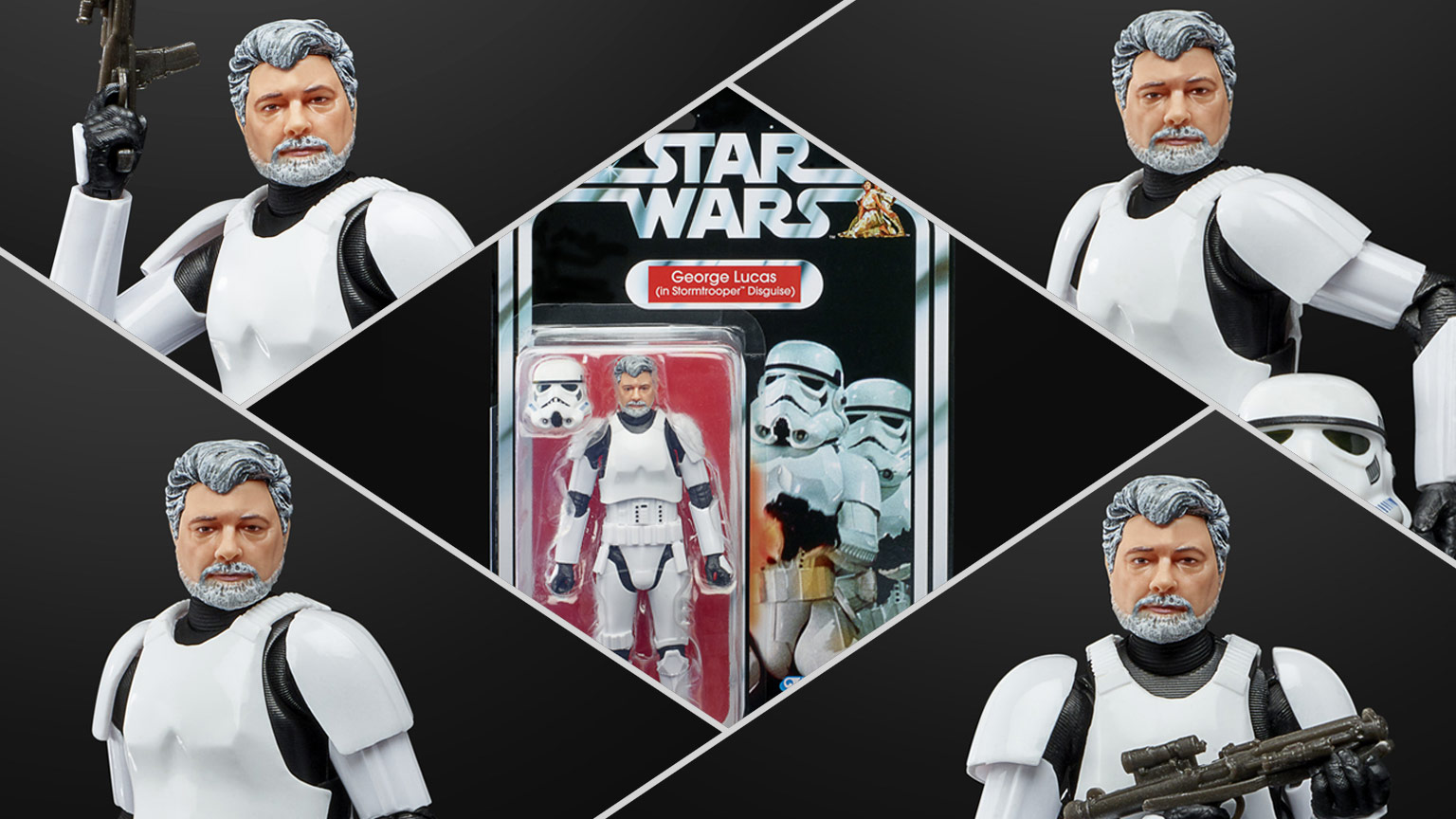 Once more, Star Wars creator George Lucas is an action figure! Revealed by StarWars.com, news broke that ol’ George’s likeness is part of a new toy coming from Hasbro’s Black Series: George Lucas as a Stormtrooper!

Call me when they turn him into The Emperor or Yoda… This news isn’t terribly exciting to this long-time Star Wars fan.

The new action figure in package! Picture credit to starwars.com

Created in celebration of Lucasfilm’s 50th anniversary and in tribute to its founder, the figure depicts Lucas in Stormtrooper armor and comes with a removable helmet and blaster. Which… as a semi-collector of Star Wars action figures… doesn’t really excite me!

I know, I know: “but it’s so rare that they officially turn George into an action figure”… but I have to say that just because this is so doesn’t mean it’s special. We’ve seen Lucas made into a Star Wars action figure before:

As a Star Wars Celebration II exclusive in 2002, Hasbro released the 3.75-inch Rebel pilot Jorg Sacul… Clever wordplay; lookin’ at you, Cin Drallig! Then in 2006, Lucas was made into a Stormtrooper for the 3.75-inch The Saga Collection. Finally, also in 2006, Lucas was back in toy form in the Lucas Collector’s Set as Baron Papanoida; his character from Star Wars: Episode III – Revenge of the Sith (2005).

But this is Lucas’ debut in the modern, highly-articulated and detailed 6-inch format provided by the Black Series. Now, the Black Series is by far one of the very best in Star Wars action figure lines; I’m nostalgic for the second Power of the Force line from the 90s, but the Black Series is superb in its attention to detail… My absolute favorite figure being the Obi-Wan Kenobi in Clone Trooper armor.

The likeness here is-… reasonable. It’s not the best resemblance of George Lucas I’ve ever seen; but they did get his basic look down okay.

Fans will buy this toy and keep it as collector items, I’m sure. I myself have no such a plan. Collector items come and go; some are very special and/or valuable down the road; my bet is that this one won’t be. In my opinion, it’s just another R5 unit the Jawas are trying to push on us poor moisture farmers!

George Lucas (in Stormtrooper Disguise) pre-orders open on September 29, at 10am PT / 1pm ET on Amazon (link inactive until launch). The figure reports in for duty in 2022.

Think this action figure will be a hot item? Comment below! Check the articles from StarWars.com and comicbook.com! See this Geek News Now piece on Star Wars video game “Knights of the Old Republic” hitting the Nintendo Switch! Also, subscribe to Geek News Now and give it a like on its Facebook page!