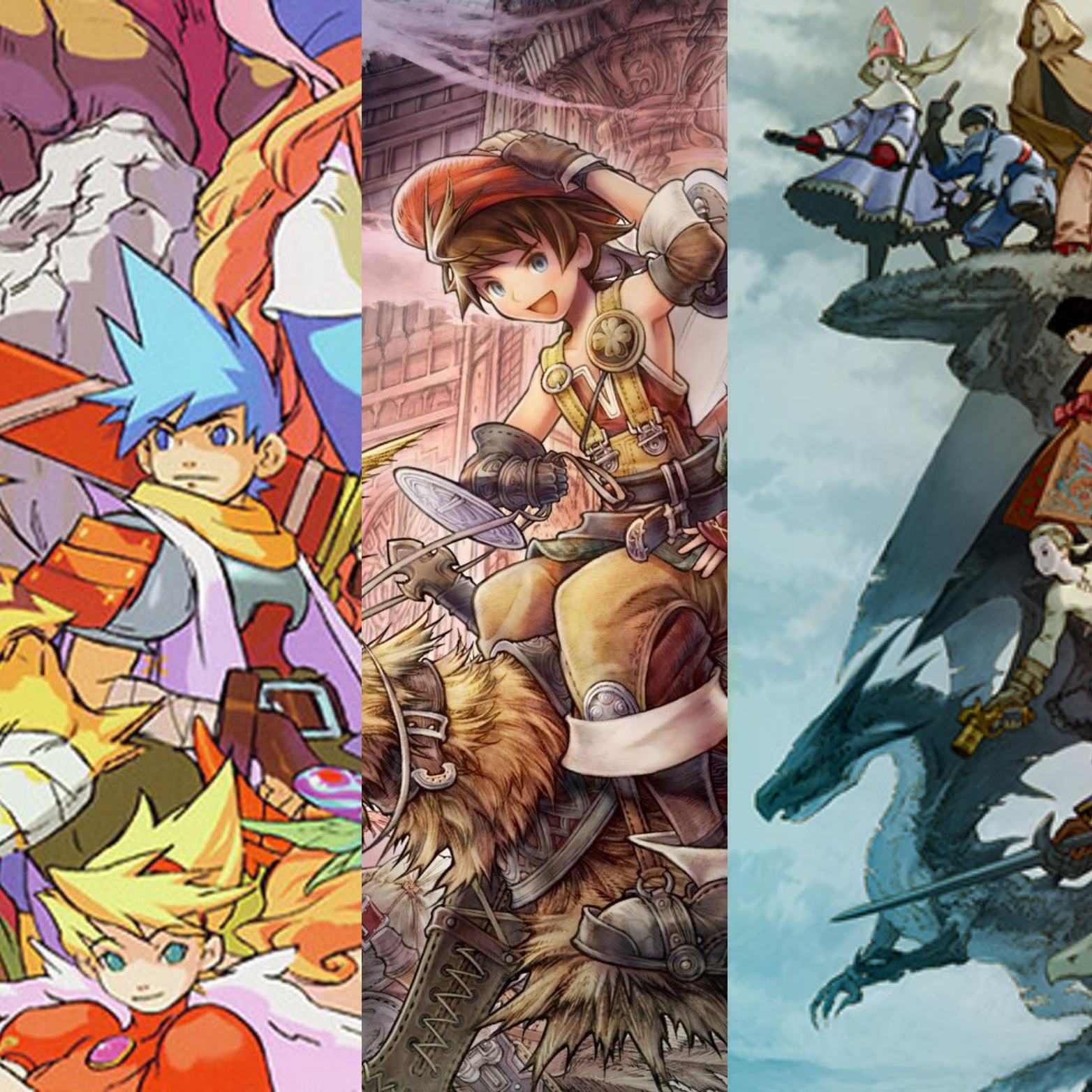 Hit points and magic are not just for table-top games! RPGs and JRPGs (Japanese Role-Playing Games) have been performing extremely well in western markets in the last few years. Video games such as Final Fantasy VII: Remake and Persona 5, major staples of the JRPG genre, have had tremendous success here in the west! But for every massive success in the genre there is a series of games that just couldn’t cut it and have descended into the void of obscurity.  Perhaps now, more than ever, the conditions are ripe for a comeback for some of these franchises. Here are five JRPG franchises that are in dire need of a revival.

art of the characters from Breath of Fire 3, image from Polygon.

The Breath of Fire series often implements an isometric top down world map and almost always stars a blue-haired protagonist named Ryu. The series is known for its fantasy setting with a heavy emphasis on dragons. The later games (III and IV) feature a mixture of 2D and 3D art styles.

Breath of Fire hasn’t seen a new game in the franchise since 2008, and that was a mobile game that was only released in Japan. Here in the west we haven’t had a new mainline title since 2003! Now, it’s not like Capcom (the developer behind the series) has forgotten about the series, rather it was a deliberate move to bench the IP (Intellectual Property). According to a blog post from 2009 by Capcom Senior Vice-President, Christian Svensson, Capcom considers the BoF series an IP that is “resting”, meaning inactive. That post was made over 12 years ago and has held true since then.

It makes sense though as the series never sold particularly well in North America or Europe despite enjoying success back in Japan. According to a sales report from Capcom themselves, the series has sold 3.2 million copies worldwide! That’s pretty low volume for a game series with more than four titles! Perhaps today’s JRPG audience might be more receptive to this long dormant franchise now. Give it another shot at life Capcom!

Artwork for Wild Arms: Million Memories, a mobile game. Depicted are all the major protagonists throughout the series. Image from TechGenesis.

One of PlayStation’s many dormant IPs, Wild Arms is a beautiful JRPG series that pays loving homage to the Old West. Everything from the settings to the whistling and spaghetti western-esque soundtracks are lovingly crafted to deliver a unique experience! The titular ARMs are usually special weapons/tools used by the player’s party that serve a purpose for combat or clearing obstacles. There are themes that carry over between games besides the ARMs themselves, such as the setting that is always known as Filgaia.

We haven’t seen a  mainline entry in the series since Wild Arms 5 in 2007. There was also a tactics game for the PSP known as Wild Arms XF that came out in the west back in 2008, and a Japanese-only mobile game, Wild Arms: Million Memories, back in 2018, but not much else outside of that.

Wild Arms has never been a major seller outside of Japan, and with PlayStation taking more of a Blockbuster approach with it’s studios over the years it comes as very little surprise why we haven’t seen more from the franchise. Despite that I feel the IP can have a strong revival if they focus on delivering a well-polished, beautiful, and deep game like Wild Arms 3 was. The age of the triple A title has diminished my hopes in a Wild Arms revival, nevertheless I hope we’ll get one from a small 1st-party studio one day.

The four main games in the original series. Image from Dualshockers.

Pronounced/known as Dot-Hack. Dot-Hack was a multimedia project from the early 2000s that consisted of four mainline games, an anime, movie, and manga. The world of Dot-Hack is a bit meta as it takes place in an in-universe MMO known simply as “The World” where the main character, Kite, is investigating the cause of his friend slipping into a coma as a result of playing the game. If you read that and thought of Sword Art Online, then you can see why this game needs a reboot or remaster.

The original PS2 games are pretty expensive and hard to find. While there was a sequel/spinoff trilogy known as .hack/GU that got a remastered collection on PS4 and PC, fans of the series have been clamoring for a remaster/reboot of the original quadrilogy. Namco Bandai has been hesitant to release a collection of the series, citing fear of poor sales.

I feel this series is primed for a modern re-introduction, the last game of the original series, Quarantine, came out in 2004! This series would do pretty well after the recent explosion in popularity in online MMO IPs and Isekai-style anime like Sword Art Online, Konosuba, and Re:Zero. Bandai Namco just needs a bit more of a nudge and convincing!

Cover Art of Suikoden 2. Image from Nintendo Everything.

One of Konami’s most coveted video game franchises is Suikoden. Based off the chinese novel translated as Water Margin, about the legendary 108 outlaws. In every Suikoden game the main character is tasked with gathering the 108 stars of destiny, usually to oppose a malicious entity. While Suikoden 2 is usually regarded as the best game, the series has spawned several sequels as well as spinoffs. However the last mainline game was Suikoden 5 on PS2 back in 2006.  We did get a spinoff with Suikoden Tierkreis back in 2009 but not much else.

The first two games are some of my favorite rpgs of all time and I would love to see Suikoden be brought back and reintroduced in glorious 4K along with 108 playable party members!

Unfortunately the series is on an extended hiatus following poor sales. As cited in a Eurogamer article from 2015, all development of Suikoden is permanently halted.

I get it, the series experienced declining sales. Not to mention Konami changing its direction as a company with less interest in game development. But the world was very different 15 years ago, they can even outsource and license the IP out to other developers! Konami could gain some major PR points if they were to bring this legendary franchise back from the abyss.

You see, in 1997 Square (when it was still just Squaresoft) unleashed upon the world one of the best FF games ever, not just among spinoffs but arguably even better than the mainline series with Final Fantasy Tactics. A sweeping epic about a civil war for royal succession with political intrigue and moral ambiguity. The slightly updated PSP port of the game, Final Fantasy Tactics: War of the Lions, even has a Metacritic score of 88.

Back in 2003, Square treated gamers with Final Fantasy Tactics Advance for the GBA. Easily one of my top five games of all time, FFTA is a content packed and engrossing title! G4TV gave it a perfect 100 and GameInformer a 95! I lost hundreds of hours to the game, and it is very easy to get addicted to it. The last title we got in this mini-series was Final Fantasy Tactics A2 in 2008. It’s been thirteen years and we still have not heard about a sequel in development.

Now is the perfect time to bring this series back from the precipice! The FF brand is stronger than ever with the massive popularity of Final Fantasy VII Remake and the online MMO, Final Fantasy XIV! I trust Square-Enix will return to the series, especially given the rumors of a remaster of FFT. It’s just a matter of “when?”

Do you feel strongly about these long-past classic JRPGs? Maybe you would add to the list? Sound off in the comments and I’ll reply. For more geeky content, opinion pieces, reviews, and news in general be sure to follow GeekNewsNow on every social platform and subscribe to our site!

In the world of Dungeons and Dragons the half-races are actually extremely common. In general, most half-races share a Human component plus another race...