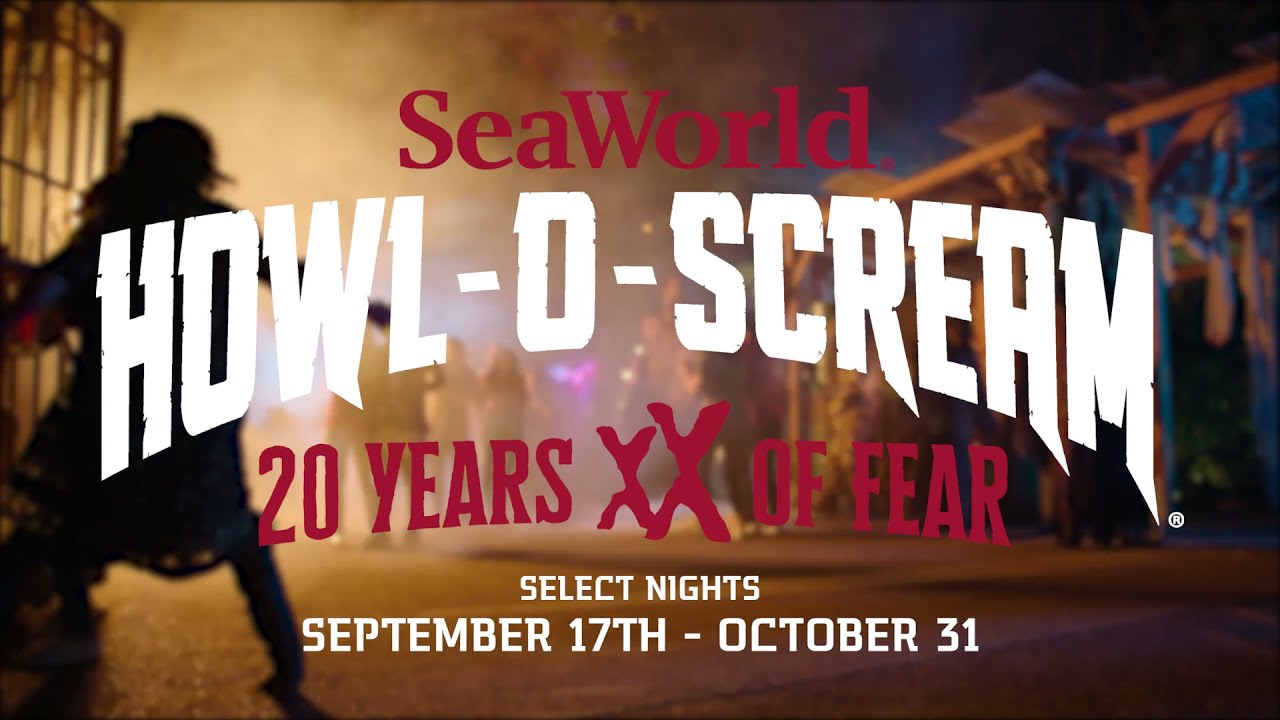 For 22 terrifying nights between September 17th and October 31st, SeaWorld unleashes the BIGGEST and SCARIEST Halloween event in Texas! During the day, guests can enjoy family-friendly fun at Spooktacular, then as the sun goes down the park transforms into an intense horror-filled haunt during Howl-O-Scream. Back for the 20th year, Howl-O-Scream returns with scarier experiences including the ALL-NEW horror-filled haunt, The Swamp at Blackwater Bayou and three NEW terror-tories!

The majority of the 250 acre park will be transformed and SeaWorld has hired an ADDITIONAL 250 employees specifically for Howl-o-Scream!

NEW for 2021, The Swamp at Blackwater Bayou, transports unsuspecting victims deep into a mystifying and horror-filled Louisianan bayou.  These unwanted guests will venture through the moss, muck, and mayhem of a foggy boathouse, swamp, cemetery, and mansion. Voodoo curses will render victims blind, the undead and the cursed will torment, and animal-human hybrids will creep alongside as they try to make their way through 12 spine-tingling scenes of absolute horror.  Extremely brave explorers will be rewarded with three additional VIP scenes if they have enough courage to risk a grizzly end!

Along with The Swamp at Blackwater Bayou, many of the all-time favorite haunts return for Howl-O-Scream’s 20th year of fear.

The 20th anniversary of SeaWorld’s Howl-O-Scream also brings new scare zones, known as terror-tories, and new bars with frightfully themed beverages. The ALL-NEW PREYground, SINdustry District and Blackwater Bayou terror-tories will engulf guests as they make their way around the park in search of Halloween fun and fear. Each terror-tory features uniquely-themed bars with thirst quenching elixirs for the over 21 crowd.  Grab a delectable liquid libation at See-Saw located inside the PREYground, at Scorched located inside the SINdustry District, or at any of the other multiple bars located throughout the park.

A SeaWorld ambassador poses in costume at a previous Howl-o-Scream. Image source from the author.

Howl-O-Scream also returns with hair-raising, skin-crawling celebrations of ghoulish delights, including Monster Stomp, a sinister song and devilish dance show that will wrap guests up in eerie murderous mischief, and features a live band, singers, and dancers! The terror will also intensify as guests experience a Coaster Creep, taking a thrilling ride on one of SeaWorld’s adrenaline producing coasters alongside fiendish ghouls, all while in the dark!

Aside from nighttime frights, guests can enjoy family fun during the day, all for the same great admission price!  Those seeking milder Halloween hijinks can celebrate with Spooktacular, SeaWorld’s kid-friendly event designed for the whole family, offering non-scaring fun! The not-so-scary daytime fun includes a hay maze, dance party, a Halloween parade, in-park trick-or-treating, and a pumpkin patch picnic. NEW for 2021 is a Día de los Muertos themed realm. Available during both daytime and night hours, this cultural experience celebrates a tradition close to the hearts of all in the South Texas region!

Spooky fun for the entire family with Spooktacular during the day and terrifying thrills by night with Howl-O-Scream make SeaWorld San Antonio the place to be this Halloween season. Gates will open during the daytime for Spooktacular’s kid-friendly Halloween fun as well as the park’s popular shows, rides, and attractions. At 7 p.m. as the sun goes down, Howl-O-Scream transforms SeaWorld into a terrifying haunt intended for a mature audience and contains intense adult content such as violence, gore, and blood. Both Howl-O-Scream and Spooktacular are FREE with regular SeaWorld admission.

In addition, SeaWorld recently announced a massive new ride coming in 2022! You can buy tickets for 2021 and come back next season to check out what’s new.

In case you’ve been living under a rock, or you’re Down Under, it’s brutally hot this summer. Thankfully, the Aquatica Water Park at SeaWorld...