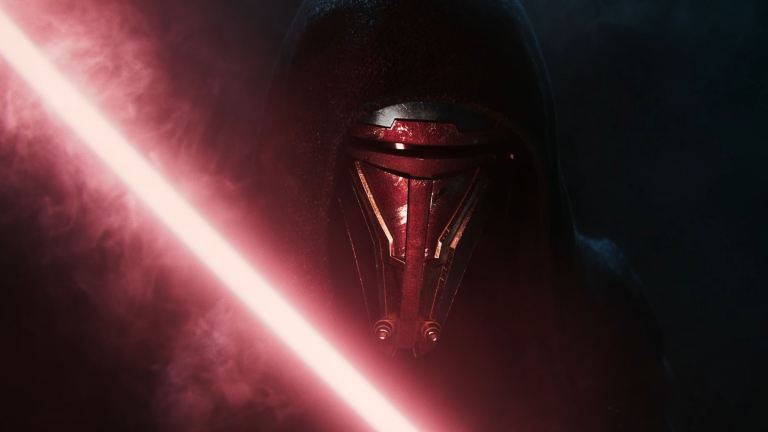 “The Dark Side is a pathway to many abilities some consider to be unnatural”, and those abilities now include remakes as well! Today during the PlayStation Showcase a short teaser trailer was shown of a dark-robed figure igniting a red lightsaber that is raised to illuminate the mask of the legendary Darth Revan. Star Wars: Knights Of The Old Republic Remake is officially a real thing! If you missed out on the original (and shame on you if you did) it looks like you’ll be able to enjoy this remake first on PlayStation 5.

Back in April I wrote about how famed gaming journalist Jason Schreier reported the rumor that there was a KOTOR remake in the works and being developed by Aspyr, and now we know, today, that he was in fact correct. The only part we didn’t know about was that it would indeed be a PS5 timed-excusive. It being a PlayStation timed-exclusive is a bit bizarre given the original was exclusive to the Xbox console. Aspyr Media is a videogame developer that is mostly known for developing ports of games for other consoles and PC. Aspyr is also no stranger to the Star Wars brand, having worked with LuscasArts before in porting the re-releases of Star Wars: Jedi Knight II: Jedi Outcast and Star Wars: Jedi Knight: Jedi Academy. The studio was also recently acquired by massive gaming conglomerate, Embracer Group, earlier this year.

This is no Jedi mind trick!

We’re bringing STAR WARS: Knights of the Old Republic – Remake to PlayStation 5 as a console exclusive at launch and to PC in partnership with @PlayStation and @Lucasfilmgames!https://t.co/kDyB4RNN53 pic.twitter.com/rGXTs3cdXR

What Are The Story Implications Of A Remake?

The most interesting tidbit I took away from the presentation however was how the game’s title included “Remake” in it. You don’t just throw that word around unless you actually mean you are starting over from scratch. Remakes differ from Remasters in that a Remaster is simply a prettier version of a previous game. A Remake is a full overhaul of not just gameplay mechanics but also changes to story, big and small. Last Year gamers were treated graciously to a true full remake with Final Fantasy VII: Remake (It was also my personal Game Of The Year). FF7R has drastically different gameplay than the original game. It’s story, while quite similar throughout, veers off in a different direction by the end.

All this is to say that there is a big chance that the KOTOR Remake will take some creative liberties with the story of Revan, Malak, and Bastila this time around. Will we now get a new canon version of the events of KOTOR? Will they implement new elements from the Disney era of Star Wars (Lightsaber handguards)? What will the gameplay look like this time? So many questions are firing off in my head! No doubt we will find out more between now and when the game comes out.

What are your thoughts on this classic title being resurrected for modern gaming sensibilities? Let us know down in the comments. I for one am absolutely hyped, this is the best news in a long time, personally! For more Geeky news and hot takes be sure to subscribe to GNN and visit our socials for more Geeky content! Our Facebook can be found here (and we’re pretty active on there) and our Twitter over here.