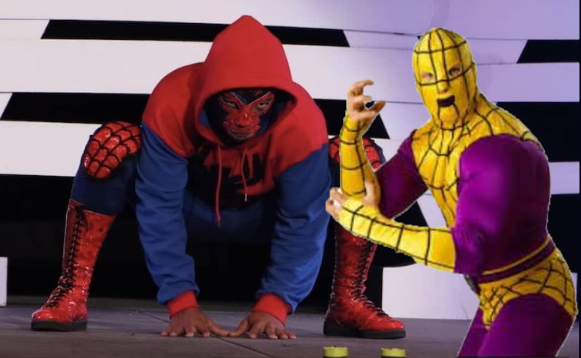 Comics publishers have never stopped trying to find new and imaginative (lucrative) ways to sell their famous characters. Recently, if you’ve been lucky enough to browse your local geek shop you may have seen weird pro wrestling POP figure versions of Marvel superheroes:

Even though they look like your standard cool alternate universe Marvel designs, just having Luchadore Marvel toys isn’t enough. To really sell them you need something to ground them. You’d think it’d be a comic, makes sense for a comic publisher but Marvel went the extra mile. Partnering with Mexican pro wrestling company AAA (Triple A) to have five lucha wrestlers appear at their Triplemania show. This partnership carried through over the last two years with talented wrestlers donning the masks and putting on Avengers style showdowns. With Triplemania this year coming and going my mind drifted to these officially licensed wrestling heroes. As Aracno barely managed to zipline to the ring, I started remembering some of the more… on the nose “homages” of pro wrestling.

Professional Wrestling rip offs are as common as original gimmicks it feels like. A lot of wrestlers take from popular culture or from wrestlers of the past as inspiration. Superheros and wrestling have a lot in common. Both have heroes and villains or shades of grey, both often feature stories with a lot of melodrama. Superheroes and pro wrestling however both always end with a cool fight. Wrestlers like to play it up, AEW’s Brian Cage has a distinct “X” on his gear and calls himself the “Swolverine”. WWE love building up their talent as larger than life athletes, to the point of some pretty super feats in media:

But sometimes similarity becomes theivery. These are the worst cases (And therefore, obviously the best) of Pro Wrestling running out of ideas:

Pro Wrestling has too many turtles

Mexico has a grand tradition of masked wrestlers. Masked Luchadores naturally take a lot from Superheros, with a few even starring in films as their larger than life wrestling identities. The most famous of the masked stars won’t even take their masks off at home for fear of their identities being discovered. These colorful designs add mystique and an easily recognisable face for the crowds to cheer or boo. Though “easily recognisable” might be underselling these shelled scrappers. The above photo (One of the greatest ever taken) comes from a match in 2015 when AULL’s “Tortuguillos Karatekas” faced IVRG’s “Tortugas Ninjas”. Only midway through the match the Las Tortugas Mutantes ran in to attack!

So in the end there were TWELVE TURTLES in this pro wrestling contest, with varying levels of costume quality. If you thought that it was only Mexico that has lawyer dodging reptiles, The WWE had some similar looking fighters for a single match back in the 90’s.

Sting has been wrestling on and off for four decades now, even a broken neck hasn’t stopped him from entertaining crowds worldwide. His timeless aura and eye-catching (And merch selling) look has made him a real pro wrestling icon. Orginally a face-painted 90’s surfer dude with spiked blonde hair Sting took a darker, broodier character as the decade wore on. But that dark vigilante character he became in 1997 has drawn a fair few comparisons to dark comic book movie classic The Crow. None of this mattered to crowds at the time. The white facepaint and boording in the rafters were skirting the lines of inspiration but cool is cool. 14 years later and Sting was evolving in TNA, getting a bit more deranged, laughing more before revealing his new look, one that might be familiar to those not living under a rock.

Unlike The Crow gimmick, Stings more cartoony maniac clown didn’t catch on with fans and he quickly returned to his serious ways. One of the more obvious cases of wrestling trying to catch onto the zeitgeist only to end up being a watered down imitation. Still… Heath Ledger never held anyone hostage with a crow.

Arguably the most shameless out of all of the gimmicks here, is also one of the most infamous. From WCW in the 1990’s again Arachnaman was the creative heads trying to find something for Brad Armstrong. Despite his great talent and athleticism it was believed that he needed an X-factor to gain popularity. Needless to say none of the other ideas went anywhere either, when the best is birthday clown Spider-Man. Arcahnaman holds a special place in many wrestling fans hearts though, the cheap costume, the fact that he threw silly string from his hands, all classic. What drives this particular pro wrestling rip-off into pure infamy though is that this actually got WCW in hot water. Despite all attempts to hide their inspiration, I mean his colours are different after all, Marvel wasn’t having it.

After a stern word from a lawyer it was the end for the ring-crawler. Yet Arachnaman has never left our hearts and clings to our memories. There’s a possibility Marvel didn’t either as a similar character appeared in the Ultimate Spider-Man books and even the video game. He’s not exact, being called Arachnoman, but he is also a cheap movie rip-off of Spidey. The most revealing is that both the comic character and the wrestler share that distincitve yellow mask.

Still, this is Marvel, we’ve gotten Japanese Spider-Man in an officially published book, there’s always time for Arachnaman to strike!

Like weird and wonderful tie ins? Check out GNN’s article on the new Nerf Pulse Rifle