The Bad Batch Season One: A Comprehensive Review 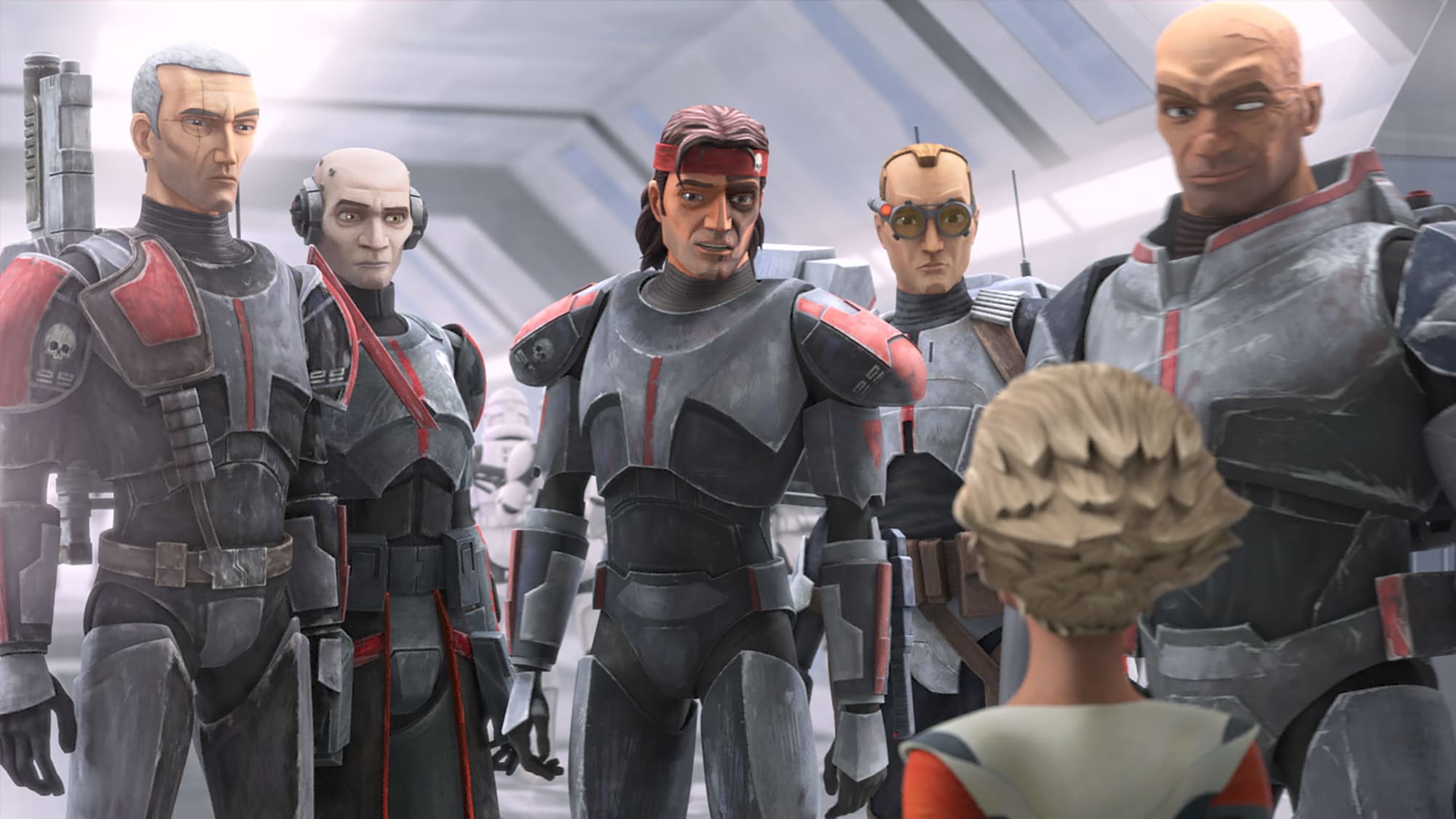 The newest Star Wars series to come out, The Bad Batch, had a very successful first season. According to Nielson, after only two episodes, the show had skyrocketed to the number one original show on Disney+. It picked up during Revenge of the Sith, with the turn of the clones and Order 66. The tragic end of the Jedi was witnessed by clone force 99, otherwise known as “the bad batch.”

The events that transpired were confusing to the bad batch at first. They were not affected by the chips, and so they had to return to Kamino to find out what exactly was going on and what “Order 66” means. There, they discovered the new Empire had taken over the Galactic Republic. Kamino was now under the control of Palpatine and the Empire.

The Bad Batch gave us some great insight into the Empire and how it took control of the galaxy. Due to the Clone Wars, Palpatine had troops on just about every planet inhabited in known space. There were either clones or droids there to take control. Some episodes had shown how the clones installed puppet governments to help sway the people to comply.

The Empire Blockade Over Kamino

It also showed the darker side of the Empire’s rise. Weapons were seized from the public to stop a rebellion, vehicles of war were utilized to intimidate and control the protests, and the Empire removed any politician who opposed it. Palpatine’s reign was only beginning, but it was well planned and disastrously effective.

The insight into how the Empire took control and the chosen timeline for these events is an important era to explore. The almost two-decade-long gap between, Revenge of the Sith and A New Hope is now available for us to explore, as we keep looking into the Empire’s rise, that is until Kenobi adds to the timeline between those two films.

A part of the bad batch’s journey, as they ran from the Empire, had landed them in Cid’s Parlor. There, they met the very welcoming host that had connections all over the galaxy. Cid assisted the gang in finding jobs; being independent of the newly formed Empire meant that the bad batch had to fend for themselves. Credits for food and fuel are hard to come by when you become fugitives. This was a nice touch to their journey. It gave a realistic perspective of what it takes to survive in the Star Wars universe.

They had worked several missions for Cid and made some good money doing so. Through the jobs, we were able to see classic characters like Bib Fortuna, Cad Bane, Hera, and Captain Rex. The show had featured many characters from the Prequels and The Clone Wars.

The jobs helped the storyline by expanding their options. It allowed for them to have an excuse to go all over the galaxy and meet some new and familiar characters along the way. The only problem was, at times, it felt a bit messy. As the gang had jumped from planet to planet and job to job, we got to see them do some great things, but the writers sometimes removed them from the spotlight. The other characters often took the spotlight, but overall it felt necessary to the story told. Though the show is about the bad batch, it is important to see other figures from this era.

But, their new life as bounty hunters had worked out because they were genetically engineered to pull of missions like the ones shown. It helped fulfill their sense of purpose, but that had been replaced by something new. They now needed to take care of Omega, their phase one clone sister. Their character arc for the first season revolved around them leaving the life of soldiers and becoming caretakers.

Each character had grown tremendously. Hunter picked up the father figure, Wrecker had become an older brother to Omega, Tech, although extremely literal, had begun to open up to Omega and her being a part of the group, and Echo proved to want to keep her safe at all costs.

Omega’s big reveal was that she was the female equivalent to Boba Fett. As we got to see how she acted in times of peril, we got a glimpse into what made him and his father so successful. She is intelligent, quick, and has a good shot with the blaster. She worked closely with Nala Se, Kamino’s top scientist, so she learned plenty about the clones, medicine, and Kaminoan facilities.

Some fans were disappointed that a child character would be a main part of the story. The issue was that she would slow down the process and make the show a bit more childish. She had moments that displayed this sort of critique, but overall, she had become a very solid member of the team. She may have been saved by the gang a few times, but as the season progressed, that role had flipped.

Omega’s character grew. For someone who had never left Kamino, she picked up the survival skills necessary to be on the run quickly and impressively. She has become a very lovable member of the bad batch and a new key component to their team. It doesn’t hurt that Nala Se hired a bounty hunter to keep her safe.

The Bad Batch had featured characters from all over their previous works. There were characters from the Prequels to The Clone Wars and even The Mandalorian. The show had walked a thin line of becoming a fan pandering work and elegantly incorporating famous characters from the past. With Dave Filoni leading the charge, we knew that he would successfully integrate familiar characters seamlessly.

The characters that were featured all helped to further progress the storyline and the events that occurred. Without overpowering the main cast, they expanded on Fennec Shand. We saw who she is and how she became such a talented bounty hunter. As she went head to head with Cad Bane, she held her own. Not to mention, his return was a massive shock for fans.

There were some occasions in the show where they focused on other aspects of the universe instead of the bad batch themselves. The Ryloth arc had only shown them as gun runners for Cid and the rebellion brewing on the planet. Though they removed our main characters from the spotlight, the Ryloth arc had proven to be an important one to follow and a way for us to understand how the Empire took control.

They used the bad batch’s position to expand on other events occurring. We met Captain Ballast there, and his attempt to rise against the Empire had shown his chip did not affect him. Each break from the bad batch allowed the story to expand past them doing gigs for Cid and trying to survive.

It did not feel that the characters featured had overpowered the show or the storyline. They helped to expand on an era that plenty of fans were excited to explore. They served a purpose to understand the events occurring around them and highlight other parts of the galaxy, both good and bad. Though some episodes may have felt like side quests, they offered something more to see.

In the beginning, we saw the separation of Crosshair from the group. Crosshair was unable to resist the chip and had turned on his brothers. He knew that they were defective to the newly formed Empire and attacked them. As they escaped Crosshair and Kamino, it had broken the group.

Hunter, Wrecker, Echo, and Tech were now lost and with a new member. As the season progressed, we got to see how they all began to welcome Omega into the group. They were reluctant to have a child at first, but they eventually realized that they were all Omega had now. Nala Se was under the control of the Empire, and Kamino was no longer safe for her.

The gang had stepped up and took the responsibility of taking care of Omega and keeping her safe. They had eventually warmed up to her as they would never have expected, especially Wrecker, who had a very close bond to her.

The use of Omega, their older sister, who doesn’t age at an accelerated rate, pushed them to grow as individuals. She was a catalyst for their development, which led to the finale and Hunter opening up and stretching out his hand to allow Crosshair back into the group.

Crosshair did not take the offer and chose to stay back and wait for the Empire to get him. They are known to be very thorough, so there is a good chance they will return to make sure what they had destroyed cannot be stolen. This, of course, helps to give a plot for season two, which is already confirmed.

The relationship between Crosshair and the rest of the bad batch is and will remain complicated for now. Season two may offer a solution to how they can get Hunter back into the gang, but it will certainly show more of the Empire’s rise to control the galaxy. We will probably see more familiar characters and see how others cope with Order 66 and the end of the Jedi and the Republic.

Overall, The Bad Batch was a very well-put-together show. The mixture of new and familiar characters blended nicely. Omega’s arc throughout the first season was great; she developed into a fantastic character and could carry the episodes she had without the rest of the bad batch with her.

The rest of the gang had developed well, too. Hunter had embraced the father role for Omega, while Wrecker was also open to embracing being an older brother for her. Cid was one of the best new characters. She offered depth, comedy, and insight into the Star Wars underground.

The way the episodes had jumped from the bad batch to other parts of the galaxy allowed us to see more than just bounty jobs. It was important to see other planets fall to the Empire, secret bases around the galaxy, the attempt for the Kaminoans to get Omega back into their possession, and the takeover and destruction of Kamino.

What did you think of the first season of The Bad Batch? Are you excited for season two? Which episodes were your favorite or least favorite? Comment on the Facebook page and share what you think!