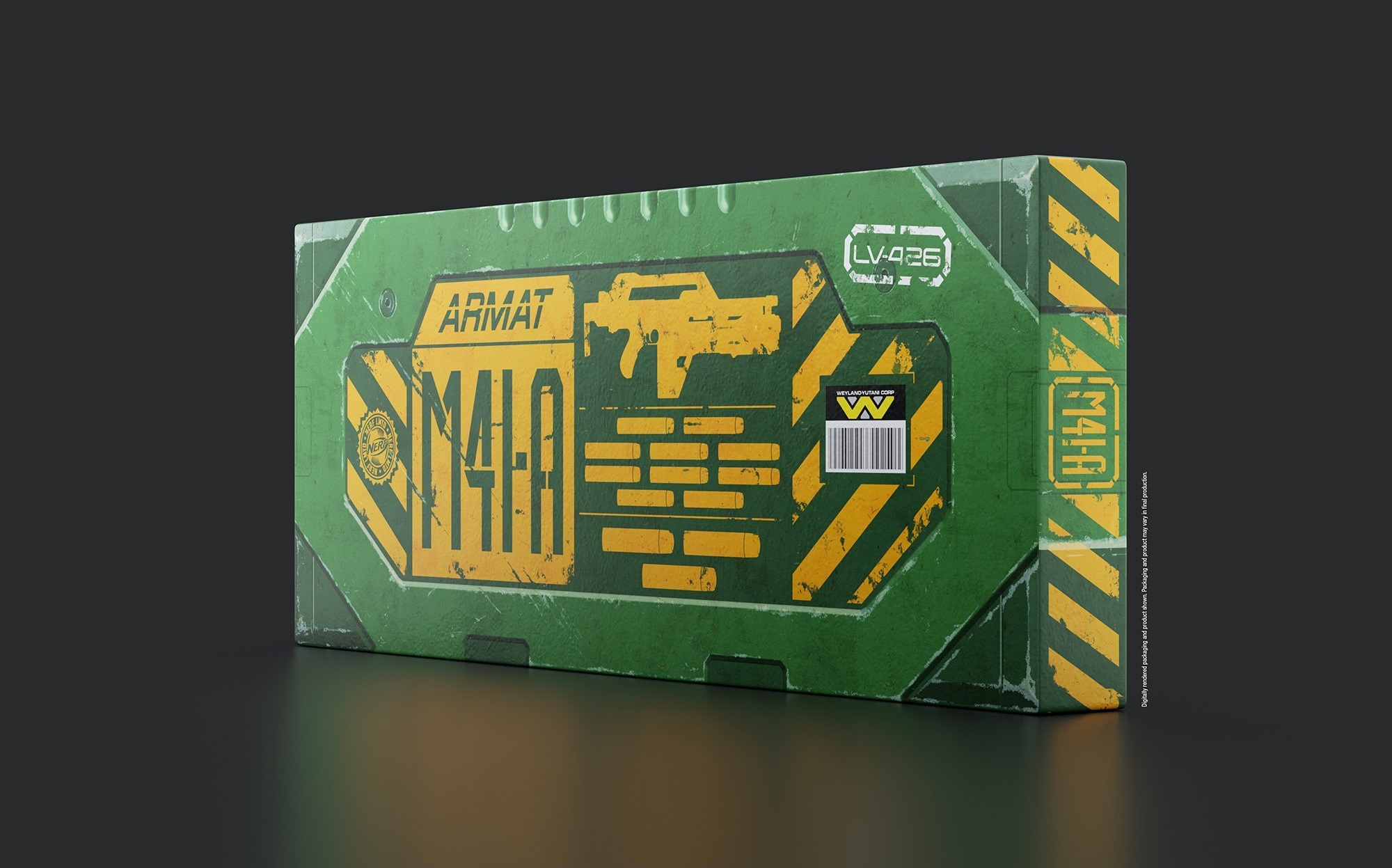 “I want to introduce you to a personal friend of mine…” said by Cpl. Dwayne Hicks in the James Cameron film Aliens (1986) regarding the M41-A Pulse Rifle. Now, coming from Hasbro, you can own your own Nerf LMTD Aliens M41-A Pulse blaster!

The whole package; it may be worth keeping the box! Picture credit to hasbropulse.com

This Nerf gun toy — sorry, it’s not good for actual combat against Xenomorphs — comes at the film’s 35th anniversary; it fires both Elite and Mega darts, with an LCD counter built into the blaster itself “so you’ll know when it’s time to reload.” Included with the Blaster are 10 Elite and 4 Mega darts, and the whole thing comes in a really slick package featuring the emblem of the United States Space Command Colonial Marine Corps., a schematic-style illustration on the inside cover, and evokes the look of a beaten piece of futuristic military surplus.

To say I’m utterly jazzed at this news would be an understatement… This is the coolest Nerf gun and potential cosplay prop ever! I love Aliens and would not mind cosplaying as a Colonial Marine at my next comic con; this toy would make it one step closer to reality.

The Nerf LMTD Aliens M41-A Pulse blaster in all its glory! Picture credit to hasbropulse.com

The toy has an almost exact replica look to it; I’m not crazy about the color scheme, but I guess going for screen accuracy in its paint wasn’t do-able. I can’t argue against its coloring because it does have the look of a tool you’d find aboard a Colonial Marine ship; what with its colors and markings resembling the infamous Power Loader which Ellen Ripley used to fight the Xenomorph Queen.

But I do hesitate at the $94.99 cost; I mean I know it’s a movie replica — which isn’t exactly screen-accurate — and has a digital counter on the side, but I don’t know if nearly $100 for this is something I’m willing to pay. I’m a cosplayer and I’d be getting this toy for a prop; I’m not likely to use it for playing shooting matches with anyone… So beyond the cosplay prop possibility, it’s lost on me.

Which is not to say I *wouldn’t* use this toy in a Nerf war with friends; oh I would own with this handy little thing at my side! And when I emerge triumphant and the smoke clears, I would look down at my opponents and declare “Game over, man… Game over!”

Lt. Ellen Ripley (left) learns to use the M41-A Pulse Rifle thanks to Cpl. Dwayne Hicks! Picture credit to futurewarstories.blogspot.com

The Nerf LMTD Aliens M41-A Pulse blaster is currently available for pre-order at HasbroPulse and GameStop and is slated for release on October 1, 2022. I definitely want this toy in my collection of props; I may just save up for this one!

Does the Nerf LMTD Aliens M41-A Pulse blaster catch your fancy? Comment below! Read the article from IGN.com! If you hunger for more Nerf gun replicas, check out this article from Geek News Now about the Amban Phase-pulse blaster from The Mandalorian (2019-present). Also, subscribe to Geek News Now and give it a like on its Facebook page!

Shut Up And Take My Credits! New Grogu Toy To Hit Stores!

If you or your kids ever wanted to feed lil’ Grogu, here’s the toy for you! Coming soon from Hasbro, “Galactic Snackin’ Grogu”! This...

For years we have been saying that “Winter is Coming”, well it has arrived as a winter vortex that is gripping many regions of...

This Is The Way! Hasbro Offers New Black Series Replica From “The Mandalorian”!

This weapon has made its way from hand to hand in recent Star Wars history; now is your chance to own your own replica...