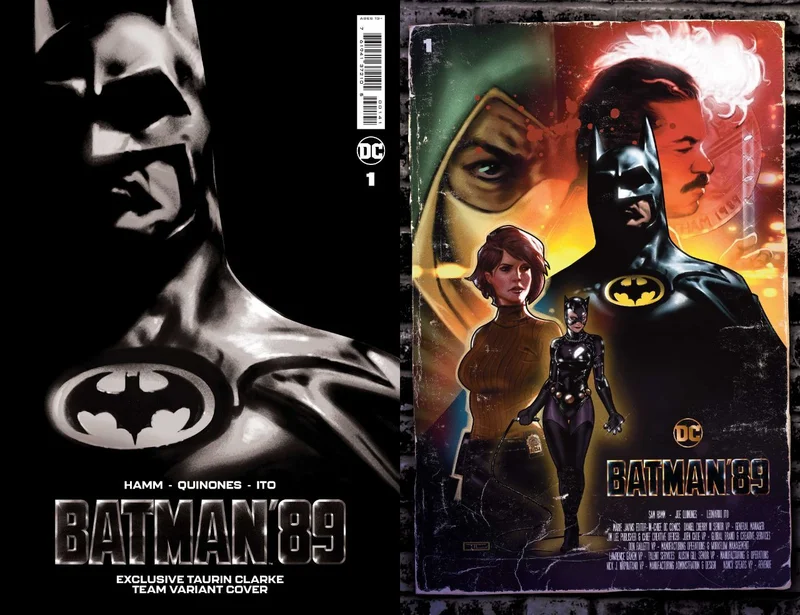 DC Comics revealed this summer that Tim Burton’s The Batman (1989) will return in print format as Batman 89. Batman 89 continues the story of Michael Keaton’s Batman, as he faces the alleged return of The Joker. In addition, Comicbook.com released in an article that Robin (Boy Wonder) will also make an appearance alongside the Dark Knight. With so much to cover, let’s go over what we know in preparation to this exciting adaptation.

Sam had stated he had no creative control during filming, leading to some worrying plot points. However, DC Comics is allowing the co-writer to finally take control and direct the story as needed.

Following Sam’s return, comic book artist Joe Quinones will also join in. Quinones had originally pitched the idea for a comic based off the 1989 film, though this was turned down. Joe Quinones had drawn cover art for DC Comics, such as Batman Eternal Issue #41, and Harley Quinn Annual Scratch and Snuff, just to name a few. Joe is also a fan of Tim Burton’s Batman. This helped serve as a both an inspiration and influence toward his work.

To focus more on the characters set to return, here’s a more in-depth approach;

Michael Keaton continues his vigilante career as the caped crusader. Batman now faces new issues within this storyline, mostly centered around Gotham police struggling to control its crime rate. Although Joker is long gone, it seems his influence he left behind managed to fester its way into Gotham.

Selina Kyle makes her appearance in a later issue, begging the question of if she is friend or foe.

The private eye does everything he can to assist Gotham’s police force. However, Dent will most likely have a much tougher role to play when things get a little heated.

It is still unknown which Robin will appear within Batman 89. However, Screenrant.com had stated that Robin will fill in plot holes found in the original film. Whether it be Dick Grayson’s Robin, or any other, the boy wonder is set to premiere in an upcoming issue sometime soon.

With so many characters and creators returning to this new style of Tim Burton’s work, many are anticipating what lies ahead for Batman and Gotham.

Have your own opinion on the matter? Want your voice to be heard? Then, stop on by our Facebook page, and say hello! We look forward to anyone wanting to pitch their ideas and opinions pertaining to the upcoming DC Comic. As always, Stay Geeky!