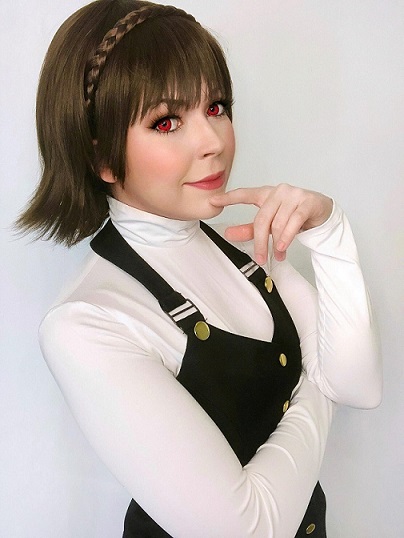 Level One Cosplay conducted her first ever interview with GNN on June 30th, 2021. The Interview centered around her experience as a Cosplayer, and what advice she had for future artists out there. Additionally, we will share what we had learned from her, hoping to spread the spark of creativity.

Level One as Makoto Niijima (Queen) from Persona 5

6 years ago, Level One became inspired by anime. Her inspiration stemmed from Persona 5’s Makoto Niijima. James, a good friend of hers, introduced Level One to Persona 5, the video game. Upon seeing Makoto Niijima, and her Persona Queen, in action, she felt a connection. Upon discussing with James, she then learned about conventions. As a result, Level One’s first cosplay became Makoto Niijima (Queen) of Persona 5.

Since then, she managed to perform very well within the cosplay community. For the past 3 years, she considered this as a type of artform. As such, another one of her cosplays consisted of Katsuki Bakugo from My Hero Academia. This was one of her most recent cosplay’s, and was even more fun to bring the character to life.

The Craft of the Cosplay:

Level One as Katsuki Bakugo from My Hero Academia

Further interview with Level One Cosplay revealed that she had designed Bakugo’s combat uniform with help from a close friend. Materials such as Polyester and Spandex made Bakugo’s outfit come together rather nicely. EVA Foam also came in handy, as it is her favorite to shape and form.

Ethylene Vinyl Acetate (EVA) Foam, known for its uses for sports equipment, had also been used for Level One’s cosplays. It’s a soft, yet durable polymer that comes in a variety of color and thickness. For cosplay purposes, a heating gun makes for a good tool to support shaping. However, EVA Foam is toxic, and will cause health problems if exposed in condensed spaces for too long.

Level One often provides self-made add-on’s to make her cosplay more effective in appearance. As such, a number of characters she brought to life would have more visual appeal. Level One had also stated she uses a 3-D Printer to create the props and add-on’s for her cosplays.

When using EVA Foam, Level advises using gloves, a cloth mask, and protective glasses during the sanding process. This is largely due to the fact that dust can kick off of the EVA foam, especially when working with a Dremel tool. Working in an open-air garage or workshop can provide better breathing room, as well. Priming and painting is used to add more visual appeal. Though, wearing a painters mask is ideal for this part, as to avoid inhaling paint fumes.

By using primer, this closes the EVA foam pores in order to have the paint stay on more properly, and avoid the paint from absorbing into the foam. Though it is still important to wear a mask through the process, it’s unnecessary if you work with acrylic paints.

Making up the Make-up:

With Cosplay comes complications. Most of which derives from keeping up the appearance involved with make-up. One of the key things to bear in mind when cosplaying with make-up is a variety of weather. According to Level, the key is Setting Spray or Primer in order to maintain facial appearance. In addition, this also helps to prevent smudging when on the floor or doing shoots.

Level One stated that SPF products can be used during shoots. Although, she prefers to use matte foundation as her go to for top quality over SPF. Though SPF foundations won’t be harmful, they are susceptible to casting light reflection. It can also make you more susceptible to unnecessary glares, making your skin oily in appearance. While most cosplayers go for a long-wear matte foundation, setting powder can be placed after, for better results.

The best advice from Level One is to simply explore with make-up. By exploring and making your own results, this will help improve in your craft to becoming a better cosplayer.

It’s never about the destination, but the journey. With that said, when travelling for your cosplay adventure, it’s better to keep in mind how you travel. Whether it be by plane, or car, Level One recommends you keep security in mind. While most airports are okay with props, it is recommended to have your bags checked in order to avoid problems.

For better travel purposes, Level One recommends a Hard-Case Golf Bag, as their outer protectant layer comes in handy. It is also very spacious, and can easily store your more awkward-shaped props or weapons.  Secondly, bubble wrap provides extra security for your more delicate instruments. In other words, it’s always best to be safe than sorry, and take extra measures when travelling.

Level One’s favorite conventions during her experience included Katsucon, located in National Harbor, Maryland. Katsucon is an annual, 3-day anime convention that runs through February over Presidents Day Weekend. It’s for everyone including multicultural enthusiasts, and informs attendees of Japans animation, society, and traditional culture.

Another convention that she admires is Holiday Matsuri. Holiday Matsuri is a December convention located in Orlando, Florida. Filled with contests, shows, and other festivities, it’s a fun gathering for those who love and appreciate specific fandoms.

For the three years she has cosplayed for, Level’s husband always supported her career. One of her best cosplays with her husband is her Raphtalia + Naofumi duo cosplay. Another, currently in production, will be Red Blood Cell + White Blood Cell from Cells at Work.

One, throughout her career, stated that she considers both her video game and anime cosplays as equal. When questioned on what her favorite anime was, she pointed out that she enjoyed Demon Slayer, Shield Hero, and Snow White With The Red Hair, particularly in that order. For her favorite games, she liked Genshin Impact, and Fire Emblem: Three Houses. She had not only done cosplay for the mentioned anime, but also the games as well.

Level One Cosplay as Kyōjurō Rengoku from Demon Slayer.

Her cosplay for anime included Demon Slayer’s Kyōjurō Rengoku, and Shield Hero’s Raphtalia. In addition, her first cross dress cosplay was Shoyo Hinata from Haikyuu!!. Cosplay for video games included Genshin Impact’s Diluc, and Fire Emblem: Three Houses’ Catherine. However, of the preferred cosplays she has done, Level One enjoys bringing anime characters to life over video game ones.

Further interview with the cosplayer had also shown her interest in wanting to one day cosplay as Marvel’s Black Widow. Furthermore, her cosplay to-do list included Elsa from Frozen, and Rapunzel from Tangled. With these projects in mind, we look forward to seeing how she will manage to perform this. Her portfolio showed how dedicated she was to perfecting her art, and we look forward to seeing future projects.

To check out more of Level One Cosplay’s art, be sure to check out her Instagram by clicking here. And be sure to stop by our Facebook Page, and say hello! As always, Stay Geeky!

In this article:anime, cosplay, interview, Kayla, Level One Cosplay