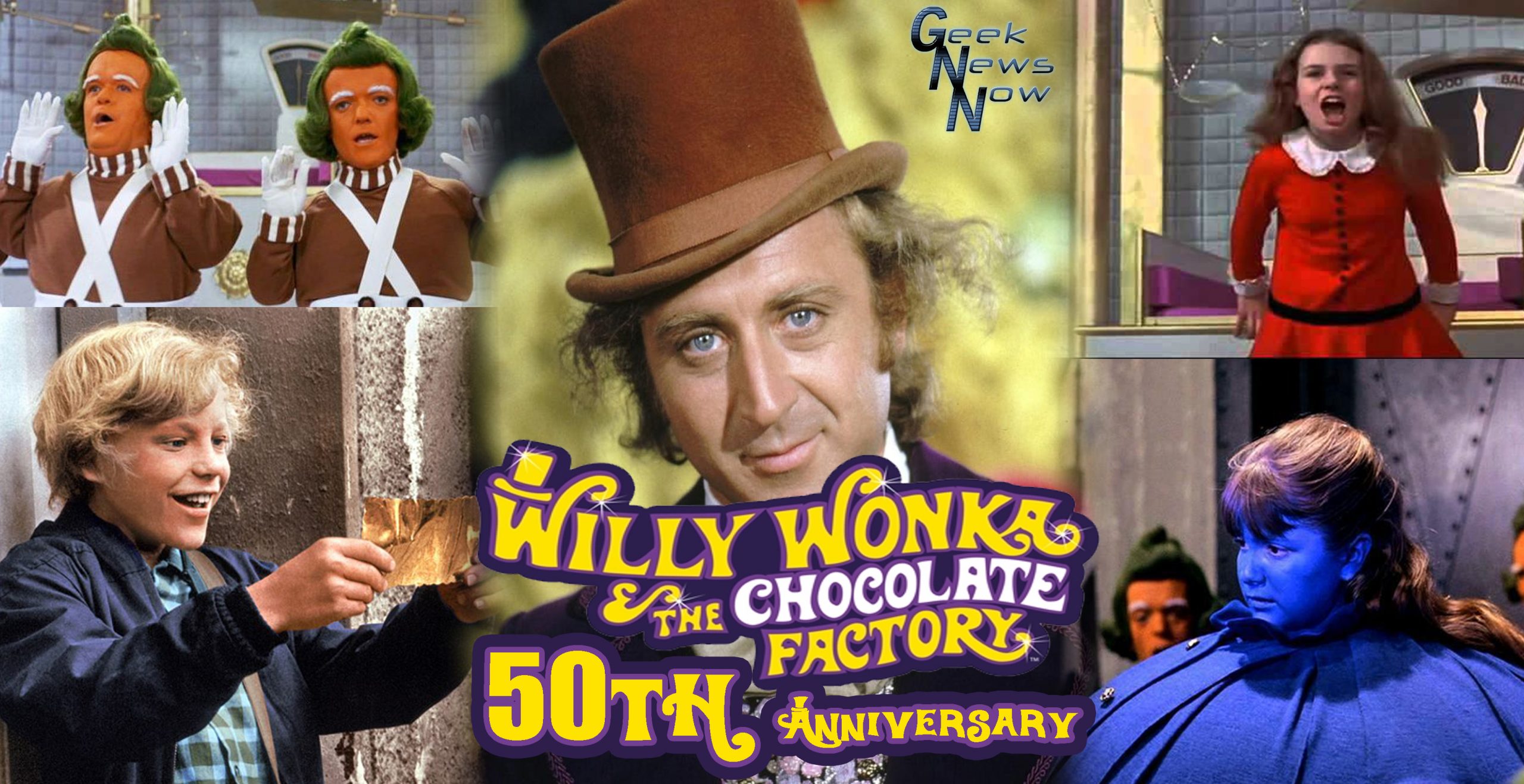 50 years ago, the world needed Willy Wonka and his reminder that “if you want to view paradise, simply look around and view it.” The Dow Jones closed the year at 890…total. A new house would run you about $25,250 and the average income was barely above $10,000 for the year. The 26th amendment to the US Constitution was ratified, lowering the voting age to 18. Mount Etna erupts, the US abandons the gold standard. Roy Disney dies in December, just a few months after Disney World had opened in Florida. We golfed on the moon for the first time and the outrage with the Vietnam War escalated when the New York Times began to publish sections of the “Pentagon Papers”.

Before you delve into this article, Geek News Now is marking this momentous occasion with a giveaway! Get your hands on some serious amounts of 1970s candy. You only have 50 hours to enter!

Gene Wilder gave us a terrific performance, and perhaps one of the greatest meme templates of all time.

Based on the “Charlie and the Chocolate Factory” novel released in 1964, the film itself was not an overnight sensation. It was the 53rd highest-grossing film of the year, earning a little more than $2 million on the opening weekend. It was well-received by some critics, but ended it’s original box office run at just barely $4.5 million, or about 1% of what it’s 2005 remake would haul in.

However, the film has grown in popularity by leaps and bounds in the 1980s thanks to home movie sales and Entertainment Weekly gave it the 25th spot on their “Top 50 Cult Movies of All Time” list. Gene Wilder’s performance is the stuff of legends, the soundtrack is terrific, and even if some of the sets look a bit…dated…it did give us parody after parody has helped keep this movie fresh on our minds.

You want a memorable parody? This should do it.

But let’s hit you with a few things you may not have known about this iconic film.

Veruca Salt (played by Julie Dawn Cole) cut her leg on the rock.

After speaking with the “Geek News Now” Legal Representative, we determined that the contract the children signed prior to entering the factory would be non-enforceable…at least in the USA…for two reasons.

But of course, this took place in Europe during the 1970s so they would be subject to those laws at the time…and it’s a kids film. We won’t go too far down this rabbit hole. If you REALLY want to dive deep into legal matters surrounding the factory, let’s figure out all of those OSHA violations and immigration laws Mr. Wonka violated.

At the end of the day, this 50 year old film is a wonder that reminded everyone in 1971 that “there is no life I know to compare with pure imagination” and that “a little nonsense now and then is relished by the wisest men.”

I hope after reading this, you are reminded as well. For indeed, every person reading this article is one of the “music makers…and we are the dreamers of the dreams.”

Did you enjoy that YouTube video? Go snag a copy of the film on 4k and also check out the GNN YouTube channel for fun and original videos as well!

In this article:50 years,anniverary,celebrate,Featured,Willy Wonka