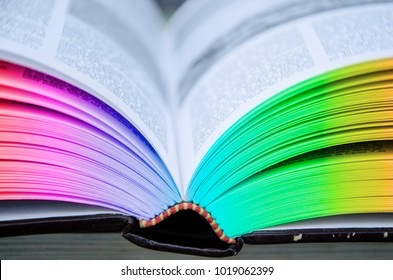 June is finally here and on top of school finally finishing and the summer beginning, we have something else to celebrate; love and identity. There are so many ways to show your pride and support, but one of my favorite ways is to pick up a story.

One of the best ways to expose yourself, and understand how people love and express who they are is to pick up a book–a romance, a fantasy, a sci-fi story, a paranormal. There are so many stories centered around the LGBTQ+ community that are rarely seen on the bestseller list. Simon V.S. The Homosapian’s Agenda isn’t the only movie-worthy story out there, but sometimes, those epic reads and rollercoasters of emotions can be hard to find. Luckily, for you, I have a list of seven books that will leave you smiling, crying, or in a whole new mindset when you finish.

1). Red, White and Royal Blue by Casey McQuistion: If you’ve been on the book side of Tiktok at all, you know about the amazingness that is this story. Taking a dive into the classic Romeo and Juliet trope, we follow Alex Claremont-Diaz, the son of the president, and Henry Fox-Mountchristen-Windsor(a mouthful. I know), the prince of the United Kingdom.

In order to prevent a horrible presidential loss for his mother, Alex and Henry stage a truce, a fake friendship, in order to resolve the dumpster fire that they caused in the first place. You heard me right…a fake relationship–friendship. I know it’s cliche but fake relationships that turn real? Hell yes.

The only problem is that everyone believes they are just friends, but as their relationship takes a sharp turn for the heart, Alex and Henry throw themselves head first into a secret romance that could ruin everything…or save it.

If you want a fun, fluffy like waffles romance to read this month, definitely pick up this book, and end the story smiling from ear to ear.

2). If I Was Your Girl by Meridith Russo: When I saw this book at Barnes and Noble and read what it was about, I knew I had to read it. I had forgotten, even after how many stories I have read, how much books can change people, inspire people and open their eyes. If I Was Your Girl is about the new girl in school, Amanda, who wants to do everything the new kid wants to do–make friends.

Amanda, though, is determined to not get too close to anyone, even when she meets Grant, who is as open and easygoing as they come. She wants to tell him everything about her, even her secret that had been tugging on her since she stepped into this new environment.

You see, Amanda used to be called Andrew.

This fast paced, heart breaking and heart warming story about a trans girl finding her true self, and a love she had been yearning for is a read for the summer. Definity grab tissues for this one. Although fast paced, this story covers so many difficult topics that many teens face today.

3). I Think I Love You by Auriane Desombre: I saw this one at the bookstore, too and it was an instant buy, not because one of the main characters was named Emma and was a writer but…okay, yes, that was a big factor in the purchase. Finding yourself, even now, is a difficult path to take, and is as difficult as following your heart. Emma, a screenwriter who had a heart for rom coms, gets trapped in a romance of her own.

Emma pushes for the film her group enters into the festival to be a romance, but her group member, Sophie, has no interest in anything light and fun. She wants it to be artistic and able to send a strong message.

But, there’s one problem–a real life plot twist turns these bitter arguments and a film doomed from the beginning of its creation into an actual, real life rom com.

Y’all, if you want a completely cute, fun rom com that will just light up your entire day, check this one out, and, while you’re at it, embrace your creativity, who you are, and your heart.

4). The Song Of Achilles by Madiline Miller: Okay, before I go into this one, just know that it will emotionally wreck your entire soul and state of being. Miller wrote this book over a ten year period, researching the story of Achilles and Patroclus and writing in a backstory, and romance that completely fills in the blanks.

And if you know the story of Achilles and Patroclus, you’d have a pretty good idea of why this book is so heartbreaking.

Patroculus is a prince who was banished to live with King Peleus and his absolutely perfectly toned and muscular son, Achilles. What started out as a loose friendship became a close one, and then blossomed into something more. Soon after, though, Helen of Sparta has been kidnapped, and both boys are forced to go to war, and face everything they hold dear.

You better grab your entire stash of Ben and Jerry’s, your fluffiest blanket and three boxes of tissues for this story, because if this isn’t a Greek tragedy, damn, I don’t know what is.

5). You Should See Me In A Crown by Leah Johnson: Before you say anything, no, this was not inspiration for Billie Eilish’s song. This is not even close to what her song is about. This story follows Liz, a black queer girl who only wats to leave her small town in Indiana to get into her dream college. The only issue? She can’t pay for it, but she knows exactly what can.

Her school offers scholarships to their prom king and queen, so Liz, naturally, runs for prom queen, because, what has she got to lose? The only thing that she’s got to lose is her focus, when her competition for prom queen, a beautiful, witty girl named Mack, has caught her attention.

This is a wonderful, quick read that is absolutely adorable. Although the romance is one of the main parts of the writeup, the story really follows Liv specifically. Her determination, her strength and ambition is truly inspiring. With her desire to succeed, her supportive nature, and her loving heart, Liv is a character you’d fall for yourself if she was here with you.

If you want a cute YA story about a girl following her dreams and becoming the best version of herself, you’ve come to the right place.

6). Cemetery Boys by Aiden Thomas: Who would like a trans boy who summons a ghost to prove that he’s a real man and then accidentally summons the wrong ghost who he ends up falling for while trying to find his missing cousin? Me. I’ll take it please.

Yadriel, in a desperate attempt to prove to his parents his gender, summons Julian Diaz, a school’s resident who died with some unfinished business and has no intention to lay and rest until his loose ends are finally tied. The boys are forced to work together, side by side, to help each one get what they want.

Thomas intertwines all the hard topics in such an amazing way throughout the story. Deep family issues, transphobia and deportation are explored and addressed in this ghost story, and with those setbacks, comes a strong set of new characters you’ll hate to close the book on.

If you want a fun paranormal with a bit of romance and an inspirational story about finding your true self, this one hits home–or the grave, depending on how you look at it.

7). I Wish You All The Best by Mason Deaver: This book starts off heartbreaking, after main character Ben De Backer comes out to their parents as non-binary and are thrown out of their own home. With nowhere to go, they end up moving with their older sister, Hannah, who has been barely anything more than a stranger. Ben, after their parent’s rejection, is afraid to come out to anyone, but with the help of their friend, who is also non-binary, and a ball of sunshine-like boy named Nathan, Ben is able to heal, and find a happier life.

This book is as wonderful as it is heart-breaking. It’s a beautiful example of someone simply trying to find themselves, even as society, as their family shuts them out. Mason does a fantastic job of intertwining every layer of the story, and the romance that blooms between Ben and the boy who took them under his wing.

Buckle up for a powerful story about identity, complex family issues, accurate displays of depression and anxiety and young, teenage love. Make sure, though, that you grab plenty of tissues.

There are so many other great stories out there and many more stories coming to print. Young Adult stories are becoming a playground of diversity, hope, inspiration, and acceptance. A reflection of the real world can be seen through the author’s eyes, and held in the hearts of their readers.

Books help us find out who we truly are, and who we are meant to be. They inspire us to be who we are, and love who we love. To see characters that are representatives of such a diverse group of people is truly an amazing experience. They give us an incredible amount of security and hope in this ever-changing world. They inspire all of us.

They certainly inspired me.