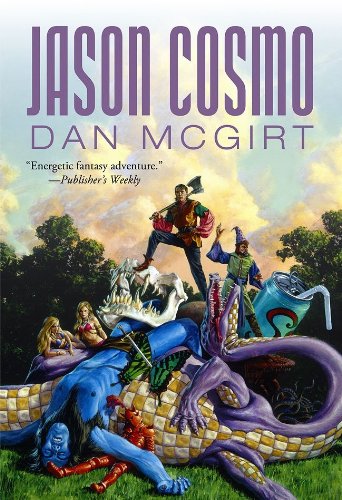 The cover for the sci-f/fantasy classic, Jason Cosmo.

Ahoy geeks, Jimmie here! Long timey, no speaky! Been a busy bee with work, family, and GNN (on top of all sorts of other stuff). In my down time I like to dive into a fun book, and being a big geek, I have shelves of beautiful tomes. Some of them are written by well established authors with a billion titles under their belt. Then there are other extremely well versed authors, but not too many books published by them, regrettably.

One of my fav’s is the opening to the (non) trilogy by Dan McGirt, Jason Cosmo. If you look around, and find later published copies you’ll see it titled as Jason Cosmo: Hero Wanted.

The man, Dan McGirt, and his awesome book.

I first came across this book when I was in middle school in the early 90’s (yup, I am that old), and fell in love with this story. It is an irreverent telling of a nobody in an unassuming village in some far off land. Wouldn’t you know it that out of nowhere someone would ride on horseback to his hometown, and try to kill him on orders from the evil (read the damn book to find out who).

From there it only gets more fun, and alot weirder, as the hero, Jason, would run into deities that are named for pop culture icons of the time or literal names for what they are/do (I mean, c’mon, He Who Sits on the Porch is a fun one, and then there is Geraldo the god of gossip).

But wait, there’s more! Similar to journey’s experienced by half lings, and elves, we also get to visit an Incredibly Dark Forest. Guess what!? It is dark as hell in there. It is this journey that brings the hero to his ultimate test, and the interesting being that administers the test to Jason.

I highly recommend this book if you are wanting fun to read, or if you are still in lockdown and need a pick-me-up! You will not be disappointed!

You can score a copy by clicking here!